If you heard of Nihon Falcom in the past, then you probably know the franchise that made the Japanese developer and publisher famous for: Ys. An RPG series with over 9 different episodes since its start in the late 1980s is back at it with the latest opus in the West, Ys VIII: Lacrimosa of DANA. After a release on PlayStation 4, PlayStation Vita in 2017, followed by PC earlier this year, it is thanks to its launch of the Nintendo Switch that I got the chance to review this game, and boy, am I glad I waited.

Ys VIII: Lacrimosa of DANA starts off in quite a cliche way. You play Adol Christin, the mythical protagonist of the Ys saga, an outstanding swordsman who has the gift of being in the wrong place at the wrong time. This time, he is aboard the Le Lombardy ship, heading to Eresia, and within the first couple of minutes, the vessel is attacked by a giant aquatic monster. Adol ditch his sailor outfit, grab his adventurer gear and weapons and gets ready to fight out against the sea creature, only to find himself overpowered by the giant and eventually wakes up on the island of Siren.

More than just a lost island, Siren is the central element of Ys VIII: Lacrimosa of DANA. It is a gigantic playground that looks like a paradise landscape, with many secrets hidden. Dungeons to discover, rare monsters to face and mysterious characters to meet, split into the numerous zones that you can move freely between. Each area is populated by specific monsters depending on its climate, like giant seahorses at the edge of the sea while wolves will attack you in rocky areas. Sadly, apart from two or three boss fights that stand out, the bestiary that you will face is the classic kind, but this removes absolutely nothing from the intensity of the combat.

During your exploration, you will meet other characters on the island of Siren. From former ship crewmembers to natives with mysterious past, and each interaction with a new protagonist, ally or enemy, is a pleasant experience that gives us an additional reason to stay on this island. Besides, you’re not just going to roam, but live in it, and it’s a whole village that you will have to build on this cursed island to survive.

Halfway between Animal Crossing and Dragon Quest Builders, Castaway village is the hub to get back to when you get lost between exploration and the various side quests to accomplish. Be careful, you will not be able to create a village in your image by positioning your house on the map, but you’ll just need to complete specific quests and the characters who will have settled in your camp will take care of the rest. As you progress through the game, you will see your camp and its population grow to give birth to a real little village in the heart of the island of Siren.

This village will serve as the main hub, where you can forge new equipment and weapons, grab consumables and accept side quests for various rewards. These quests will send you to the four corners of the island to face monsters who are not too fond of human presence in their natural habitat. Fortunately, you and your companions are ready for the challenge – fighting as a squad of 3 –  where you can instantly switch from one to the other by pressing a single button. The camera is not problematic during these exploration phases and the ability to jump and climb to certain surfaces gives us a real sense of freedom.

The enemies you meet will attack you as soon as they see you, but thanks to your arsenal and the skills of your characters, it is always with a smile that you will take upon the challenge. You can easily lock onto an enemy, chain combos, and use special skills to spice things up for devastating assaults. The more you use a technique, the more it will gain in power, and the game is quite tense, fast and pushes on the offensive especially with quicker action and defeat bosses.

It’s not just bosses who will give you a hard time though, since regularly your camp will be attacked by waves of enemies, which you will, of course, need to defend with your band of heroes. Simple at the beginning of the game, these defensive phases will become more and more intense as you progress throughout the game.

While the game already came out on the PlayStation Vita and PlayStation 4, the Nintendo Switch is still pretty decent technically speaking. Ys VIII : Lacrimosa of DANA is solid in terms of frame rates throughout the game, whether there’s no action going on or a fanfare of special effect in the midst of a raging battle. Nevertheless, it’s not a demanding title to start with, with an output close to what a merge between a PlayStation 4 and the PlayStation Vita.

Ys VIII : Lacrimosa of DANA was reviewed using a Nintendo Switch digital download code provided by NIS America. The game is also available on PlayStation 4, PlayStation Vita and PC via digital and retail store releases. We don’t discuss review scores with publishers or developers prior to the review being published (click here for more information about our review policy).

• Not enough risk is taken in the series
• Boring bestiary

Ys VIII: Lacrimosa of Dana might not be the most gorgeous game there is, but it's an excellent JRPG adventure that will keep you busy with a hefty amount of playing time. 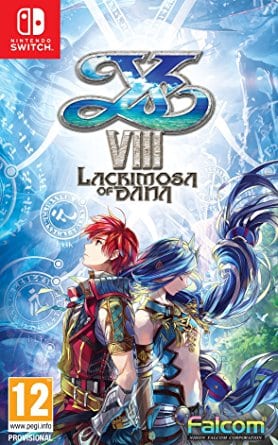