Review: Yono and the Celestial Elephants

In my recent years as a reviewer and in general lover of all gaming things, I rarely saw an elephant as the main hero in a game. With the exception of Tembo the Badass Elephant (developed by Game Freak and published by Sega), I can’t think of anything else until Yono and the Celestial Elephants. An adventure puzzle game, influenced by the Legend of Zelda, this adorable little title is the first game created by Niklas Hallin.

Within the first minutes of gameplay, the title puts you into this quest to bring harmony to the world by helping out people around the world. This will be done via a series of small quests, in the most straightforward manner, yet with a lot of charm and adorable sequences in between.

The gameplay by base is accessible to everyone, even if a bit too simple, reduced to a mere count of two actions. One button is for a charging headbutt, another to blow air out your trunk. This will second into difference interactions like activate a switch to open a locked passage, open a chest, carrying objects or keys for sealed door, and more.

You’ll also get to interact with the inhabitants of this kingdom, who tell us more about the lore and eventually will give you access to related quests. These missions consist more nor less of fetch and delivery, which sadly can become quite boring due to the lack of an inventory. Yono will be force to carry each individual requested quest item on its back and bring it back to the quest NPC. Worse is the case of when you actually drop that quest object into a ditch or the side of the map (since it’s an isometric design), it gets teleported to the place it spawned at.

The charge which is a short distance headbutt in a way, can be used to break rocks and progress in the riddles, as well as the main way to attack enemies in combat. Sadly the latter can be really annoying as it mainly goes in a single direction per press of a button, which lacks the expeditious factor of a melee attack, but of course will be easier for the youngest players around. Finally the Yono’s trunk is the pillar in most Legend of Zelda-like riddles, which you’ll use to do certain actions like storing water and blow it out to a fire, blow on dandelions to get health collectibles and more.

As I mentioned above, Yono and the Celestial Elephants is a game made extremely accessible, and you can tell it was aimed at the very young gamer. The title can be easily finished within 3 hours (even at 100%), but its story is deep, hidden under all these colorful cartoon-ish graphics. Our friend Yono is a sort of godsend messenger, who doesn’t really know his purpose, but feels compelled to help everyone in hope to solve harmony between three different races. You’ll also learn throughout the game that there’s been previous instances like these in their history, and that Yono was not the only Celestial Elephant sent, by revisiting their stories.

Design wise, the game is just cute as hell. I don’t really use that word often in my reviews, but I believe for once it fits the description. The textures, VFX, environments and character designs are really good, and the game’s creator – Niklas Halin – should be proud of having done all this alone. Even if you disregard the random bugs in terms of movement, or simplistic attacks, the game is very well animated, and audio effects supporting all actions fits perfectly.

Yono and the Celestial Elephants was reviewed using a Nintendo Switch downloadable copy of the game provided by Neckbolt Games. The game is also available on PC via digital release stores. We don’t discuss review scores with publishers or developers prior to the review being published

A title completely created by one guy, Yono and the Celestial Elephants is kid-friendly adventure, which hides a rich symbolic lore underneath its cartoonish appearance. I wouldn't recommend playing the game for its gameplay, but for the experience and discovering quite a deep story about the harmony of all things. 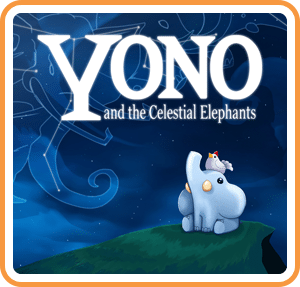