Ah, Yakuza. I find it surprising that there are so many Yakuza games out and the lore has gotten super elaborate, and yet there are still tons of people who haven’t played a Yakuza title. One of the most underrated series in gaming, the Yakuza franchise began in 2005 with the now-classic PS2 title Yakuza (which was remastered recently as Yakuza Kiwami). While it’s an open-world crime-themed action adventure, I find it remarkably unfair that Yakuza is often compared to Grand theft auto. The similarities are honestly meager, and Yakuza does a ton to set itself apart. The most obvious difference is that Yakuza is very, very Japanese. It’s based on the urban culture and life of Tokyo, and in many ways, its story and pacing are typical of Japanese dramas. Moreover, Yakuza ends up being different because the Yakuza is not the same as most American gangs or criminal organization.

The Yakuza may be deeply controversial, but they are still part of Japanese society, and as such, they conform to many aspects of Japanese culture. Yakuza members follow their own strict moral codes and share many of the same values as law-abiding citizens. The Yakuza games managed to capture that concept well, crafting characters who were men of the criminal underground but who still had strong moral codes. This, along with its vibrant recreation of many famous Japanese urban districts, is what has always made Yakuza memorable

Now, Yakuza Kiwami 2 is a remake of Yakuza 2, the sequel to the game that started it all. As a fan of the series, Yakuza 2 was the one where it really came into its own, so I was excited to see it remade. Yakuza 2 is also a game that hasn’t aged too well, so the remake is great news. You see, the Yakuza games are fun and engrossing, but the first 3 in the series still had control issues and problems with the story pacing. That’s why Yakuza Kiwami 2 is such a great idea. It doesn’t just give Yakuza 2 a visual makeover (although It does manage to really spruce up the classic’s graphics); it revamps the gameplay and makes some much-needed changes to the story. Yakuza games have always been story-heavy (seriously, it’s like Metal Gear Solid with Japanese gangsters) and they often introduce a whole host of characters inside of a short span of time. Kiwami 2 keeps that (expect to sit through a lot of exposition before your first actual bit of gameplay) but it manages to make a few much-needed edits to keep the story more coherent.

The thing is, Yakuza stories aren’t complex in the sense that they’re dense and philosophical, but rather that the chain of betrayals and twists can get a bit tricky to follow. In the case of Yakuza Kiwami 2, we’re back in the shoes of super-loyal enforcer Kazuma Kiryu. Last game saw him take the fall for a murder and end up embroiled in a bitter power struggle, whereas Yakuza 2 explores his past more and tosses him into yet another assassination. This time, Kiryu needs to get to the truth and stop a war from breaking out. While he would have preferred to leave the gangster life behind and walk the straight and narrow, Kiryu needs to keep a shaky peace between the Tojo and Omi clans. The beauty of Yakuza’s stories is how over-the-top they are. They’re less grim gangster adventures and more elaborate soap operas with dramatic essence and gravitas. A lot of tropes from Japanese culture and cinema are here, and the story manages to get really intense at times but never over-the-top. Of course, like any good yarn, it mixes in comic relief and light-hearted moments to give it that human touch.

The thing is, Yakuza probably stands out more than any other open-world crime game there is because of how much it immerses you in its world. You really delve into Kamurocho (a fictionalized take on a famous Tokyo neighborhood Kabukicho) as well as districts based off of Osaka’s busy streets. Sing karaoke, get drunk, fight strangers, it’s all part of the experience. Yakuza games have always succeeded in bringing Japan’s vibrant cities to life, especially through their oft-bizarre sidequests and minigames. The real treat with Yakuza, of course, is that it makes use of Yakuza 6’s engine to really revamp the physics and movement as well as the combat. The sweetly named Dragon Engine makes the gameplay feel much more modern, making this a must-have remake for fans of the series as well as newcomers

Yakuza Kiwami 2 was reviewed using a PlayStation 4 digital code of the game provided by SEGA. The game was originally released on PlayStation 2 in 2006. We don’t discuss review scores with publishers or developers prior to the review being published (click here for more information about our review policy).

• Cutscenes run a little long
• Combat can be grindy

Yakuza Kiwami 2 totally revitalizes an underrated gaming classic and applies the lessons Sega learned throughout the series’ evolution. It’s still unique and even weird at times, and it can still be a little rough around the edges, but few series manage to take you deep into a criminal underworld and tell such compelling stories. 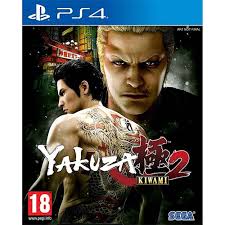