Editor’s Note: Years after the game’s original release on PC (and other platforms), this review has been updated by Nazih Fares following the release of the game on the Nintendo Switch as well as the updates to all customers which reflects on the overall score, and final verdict.

Worms W.M.D at first sight on the Nintendo Switch is a clean port to the Japanese console. The beautiful hand-made drawings are finely rendered, and there’s a clean fluidity in terms of performance, even if some cutscenes seem to have a frame rate a little lower than the actual game itself. The game in general tries to run at 60FPS like its other console counterparts and PC, but with a resolution of 720p.

In portable mode, no difference is to be noted in terms of technical quality, but there’s one main issue which is inherent to all the other versions which is the camera. The use of the later can become sometimes complicated especially on the small screen of the Nintendo Switch, and even more noticeable when playing with friends with two different joy-cons, because of the placement of the zoom button on these tiny little controllers.

In terms of content, the Worms W.M.D has everything the other console and PC versions can offer, from singleplayer to multiplayer modes, but also adding extra features. Making use of the portability of the console helps making offline session a thing with this game, with the ability to play together in Ad-Hoc modes with numerous Nintendo Switch, or share Joy-Cons as stated above on the same screen (get ready to bring magnifier glasses and squint through, the menus and icons are tiny as hell). There’s also two new forts added, as well as a space theme and some small customisation options only on the Nintendo Switch, but I wish there was more Nintendo-themed content for this version, like our famous mustachioed plumber cap or more.

So the question is now: do you need to get the game or not? Well, if you are an avid fan, this is the only version of the game that you can bring along with you at a house party. It will though require of you to bring your TV dock because the visibility on the handheld mode is too low for multiple players to share a screen. But if you already have the game on PC or other consoles, there’s no real need to buy it again unless you just want to spread some Worms carnage on the go.

I actually grew up with the Worms games, so I’m a pretty big fan of the series. The first time I saw the game in action, I found the premise very strange. Why were they worms? Why did they have bazookas? Just how many weapons were there? A couple of weeks later I would get my hands on Worms Armageddon, and I got to find out firsthand.

For those of you that are unfamiliar, the Worms games are typically sidescrolling turn-based strategy games. The series has switched it up every now and then, but the core gameplay revolves around one team of works squaring off against another team of worms using a very, very creative arsenal of weapons. When it’s your turn, you control one member of your team for a set time interval, and during that time you can move around, climb through the level, and plan the best way to take out as many enemy team members. There’s a lot of planning involved, and you’ll often find yourself hoping that your enemy doesn’t take out a strategically placed worm soldier before you can use him to mount an aggressive counterattack. To add some tension to the mix, there are environmental obstacles like oil drums and landmines strewn about (as well as crates with valuable weapons), so you’ve got your work cut out for you.

While the game’s mechanics are fairly straightforward, mastering the game is an entirely different affair. To begin with, each weapon has its own unique style and often physics that you must master. Your weapons are subject to wind resistance, and so you need to plan your shorts accordingly. The variety doesn’t stop with the arsenal. Worms games have typically offered players tons of cosmetic options to really personalize their teams, and W.M.D keeps the tradition alive. There are dozens of voice packs (which are hilarious) as well as hats and team logos.

As I mentioned before, this is the core gameplay of the main games in the series. They’ve switched it up now and then, but Worms W.M.D is very much a classic Worms experience. While it makes some changes here and there, it stays true to the experience of the Worms series.

In terms of changes, the most obvious one for me is the visual style. Typically, Worms games used a very cartoonish aesthetic. Worms W.M.D has eschewed that in favor of much richer, hand-drawn environments. It’s reminiscent of the style used in Rayman Origins and Legends, and I love it. Animations have also been classed up, and now explosions and conflagrations feel much more vivid. It’s really managed to make the already-tense gameplay that much more immersive.

The most obvious change after the aesthetics is the addition of a new crafting system. This is a development I wasn’t as big a fan of. Crafting makes sense in survival games and maybe open-world action adventure titles, but in Worms it feels a bit off. It does help with the pacing of the game, as now you get to craft weapons while your enemy uses his/her turn. Another good aspect of the crafting mechanic is that it lets you dismantle some of your weapons for use in crafting, which also enables you to make use of the Worms arsenal. In any event, I didn’t mind it as much but I didn’t find myself using it either.

The Worms arsenal is already massive, and they’ve made a few additions here and there. Lots of classics return for Worms W.M.D, and before long you’ll find yourself demolishing your enemies with the bouncy banana bomb, the devastating holy hand grenade, and the earth-shattering Donkey. The hallmark of the Worms series has always been its mix of comedy and ultraviolence, and Worms W.M.D steps it up by adding in vehicles. The vehicles can really give you an edge, and they add a fun new component to the gameplay. However, I did find them to be somewhat overpowered as well.

Nazih’s thoughts on the console edition

From the first boot up on the Xbox One, one thing is striking: the Worms Armageddon visual direction is everywhere even on the technical point of view. There’s however a missed opportunity regarding the diversity of the environments, since there are ultimately just a handful dozen of them.

Yes, it’s still a 2D world, but it loads quickly and without a hitch. With this new level design, whether it’s snowing, or covered with greenery, there’s a certain pleasure in contemplating the level of detail of these few map themes. There’s although a few hitches here and there where so much happen at a time on the screen, like during airstrikes, random crashes in online matches, and the camera-snags… Basically a bit of finishing touches were needed on the console version to be optimal at launch.

Regarding the gameplay, the controller scheme hasn’t really changed. Those who never played the Worms series on console will need to get used to a controller, but the learning curve is not that difficult. Nevertheless, for fans of the series, you should learn to master some special weapons and gadgets that require training, especially the Super Sheep and the ninja rope which relies on a lot of technique and speed to master.

If you haven’t played the Worms games, Worms W.M.D is a perfect point to jump in. Arguably, it doesn’t make that many changes to the classic Worms titles, but it’s still a great Worms game that you can enjoy with friends online or offline.

Worms W.M.D was reviewed using a PC and an Xbox One downloadable code of the game provided by Team 17. The PC version was tested by Mazen Abdallah on a PC running Windows 7 Pro, with a 4GB NVIDIA Geforce GTX 970 fitted on a 4th Generation Intel i7 4790 3.6Ghz CPU and topped with 8GB of RAM. The game is also available on PlayStation 4 via digital release. We don’t discuss review scores with publishers or developers prior to the review being published.

Worms W.M.D offers a fresh take on the classic Worms games that manages to update it for the modern age without changing the gameplay that made the series such a hit. It's a great title for fans and newcomers alike. 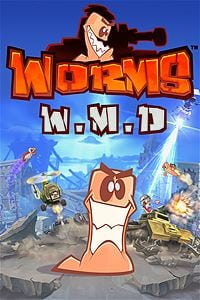