Led by Machine Games since 2014, the Wolfenstein series has witnessed a revival fit of the iconic id Software shooter. Loved by the critics and fans because of being quite “controversial” when compared to other first-person shooter who are heading towards the game as a service strategy, the Wolfenstein reboot has been great so far, with a successful new relaunch of the brand with Wolfenstein: The New Order, followed by a standalone side-story known as Wolfenstein: The Old Blood. Now it’s time for a true sequel in this revived franchise which follows upon the path of the 2014 game, with Wolfenstein II: The New Colossus.

For those of you who never played Wolfenstein: The New Order, I’m probably going to ruin the game ending for you, as I need to remind you all that the story ends with BJ Blazkowicz killing a high ranked Nazi scientific officer known as the Butcher. During his fight, our hero sadly succumbed to near-death injuries after ordering the airstrike on the enemy base, leaving us all with a surprisingly poetic and poignant cliffhanger. Two years later, BJ is recovering from a coma, and the Nazi forces now led by Frau Engel, are back at it with almost a complete world domination. Wolfenstein II: The New Colossus starts immediately after the end of the first episode, but Blazko ​​is now a broken man both emotionally and physically.

Like with the original, MachineGames goes against the trends of the industry, giving us a first-person shooter that is solely focused on a singleplayer experience, heavily focused on solid shooting mechanics and a great script. Well written, the game has some fun narrative ideas (which I’ll delve into later), in addition to incorporating some intense sequences, full of surprises, smartly jumping from dark humor to more serious tones, almost reminding me of a Quentin Tarantino movie.

The Swedish studio has focused a lot of its narrative efforts on its characters. Thanks to Wolfenstein II, the developers showcased Blazko in a different way, that he’s not just a Nazi-killing machine, but also a human being full of emotions and feelings. Throughout the game, you’ll learn more about his difficult childhood, as well as the progress of his relationship with Anya, a Polish nurse he met in The New Order, and happens to mother of his twins.

It is especially through all these relationships with secondary characters that B.J. reveals his inner thoughts and self. MachineGames once again deployed a great array of supporting “actors” including the return of Max Hass, Caroline, Bombate and more. This episode also introduces us to some new faces, like Grace who is the leader of the African-American resistance, Super Spech, a conspiracy lawyer persuaded of the existence of aliens, and many more. They’ll make you smile, and by the end of the game, you’ll miss those that didn’t make it, and feel a certain compassion for this band of misfits that are more than just violent hungry resistance fighters.

If the 2014 version of the game was quite restricted in terms of stage variety, Wolfenstein II takes us on a deadly road trip throughout the United States, now completely controlled by the Nazi regime, and you’ll end up visiting the post-atomic bomb ruins of New York, New Mexico, and even the ghetto of New Orleans.

The levels, for the most part, alternate between linear corridor-like stages, as well as semi-open combat areas, which are bigger than the previous game, taking influence from the side story Wolfenstein: The Old Blood. While the variety is great, and everything looks fine at first sight, the environments are a bit moderate in terms of technicality. While I only reviewed the on Xbox One, my colleagues pointed out the same kind of moderate textures applied on all elements, but also a rather poor management of lighting in some cases, causing some uneven quality between shadows and flares. For example, you can quickly get blinded by a simple light bulb in a dark area, or even have trouble to discern distant enemies if they are in an obscure or even foggy area.

To change the rhythm of the game gradually, and to prevent just sequences of shooting levels, Wolfenstein II invites you to roam every 2-3 levels during the Hammer of Eva, a stolen Nazi submarine serving as a mobile base for the resistance. You will be able to activate side missions, such as helping crew members with simple fetch and deliver tasks, to unlock either additional story parts and cutscenes with some intense conversation, equipment and upgrades, or try to break the scoreboard on the shooting range.

MachineGames has also made an effort in terms of replayability like the first game. The double timeline is back, depending on a choice you make at the beginning of the game, but also with the great number of collectibles to find in each level, which also unblock concept arts, music tracks and much more. There’s also a new side-mission system known as assassination contracts, which are based on enigma codes that you’ll collect from officers during the story. Once you collect enough of these, you’ll have to decode these enigma with a sort of mini-game in the submarine, to receive key detail on higher rank Nazi assets which will have you revisit certain parts of the games to kill them.

Although MachineGames effort was mainly focused on a neat narrative upgrade in this sequel, the studio did not forget the very essence of Wolfenstein, which is namely being an effective and violent Nazi killer. Don’t expect much of a change, as The New Order formula is still applied with Wolfenstein II, with some minor changes. The shooting mechanics and sensations are always tensed, brutal and fast, with some iconic weapons like the double-barrel shotgun.

Like in The New Order, players can choose to either take the stealthy approach in missions to get rid of Nazi soldiers with melee or silenced weapon. While I would love to recommend this approach, the enemy’s artificial intelligence is rather irregular, where you either get caught for no reason, or sometimes pass by unnoticed when you’re clearly visible. Even if you go the other way, with a full-frontal assault, soldiers are rarely taking cover or trying to counter you, leaving you to run some intense killing combos, feeling like a super soldier (which in many ways I guess is the point).

Finally, one of the last two gameplay changes are the ability to now dual wield any set of weapons at the same time, instead of sticking to the same pair. This can very helpful in most crowded situations, such as having the assault rifle with bullet piercing paired with a shotgun to be ready for all sorts of encounters. The second change is three new “body” enhancement you will get to pick around the middle of the story, which unlock some great stealth of assault abilities, never been seen in the series. They range from a mechanical shoulder brace which can allow you to ram into certain set of obstacles (including enemies), to a body armor that can allow your muscles to compress to a point of squeezing under certain small gaps, or finally a pair of leg prosthesis that can extend to reach elevated platforms.

Wolfenstein II: The New Colossus was reviewed using an Xbox One copy of the game provided by Bethesda Softworks. The game is also available on PlayStation 4 and PC, as well as an upcoming release on Nintendo Switch planned for 2018. We don’t discuss review scores with publishers or developers prior to the review being published

Wolfenstein II: The New Colossus is a perfect continuation of MachineGames’ work on the series reboot back in 2014, with a greatly written story, and still very successful game mechanics. A must for fans of the series, but I’d recommend playing the main game before jumping on this one for newcomers, to fully appreciate the studio’s work.

Review: The Elder Scrolls Online: Morrowind
Be the first to comment!
Leave a reply » 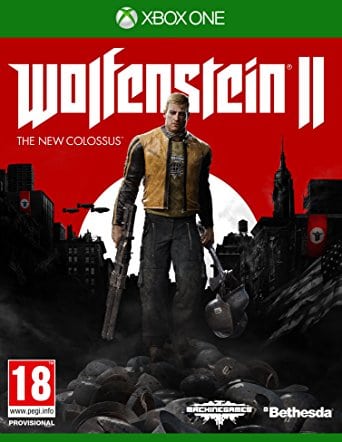