Many people have criticized the Resident Evil games lately for veering too much towards action and not doing enough to craft a scary atmosphere. People instead praise newcomers like Amnesia and outlast for reinvigorating the genre. The truth is, however, that there were truly terrifying games coming out of Korea with barely a pistol shot way before Amnesia made its first YouTuber scream. White Day: A Labyrinth Named School offers a modern take on this classic Japanese game design sensibility. The game is actually a remake of a 2001 classic Korean survival horror title.  Does it hold up in today’s post-Amnesia marketplace? Let’s find out.

For the most part, White Day: A Labyrinth Named School gameplay goes for a pretty classic survival horror experience. The fun starts when your protagonist breaks into his school to leave a present for his sweetheart on the eve of a Korean holiday. He gets locked in, and finds himself pursued by evil spirits and one seriously disgruntled employee.

The ‘labyrinth’ part of the name refers to the fact that you need to explore the school and find a way to stay alive and get the hell out. You also need to work out the sinister mystery behind everything. For the most part, you explore certain locations, collect notes that move the story along, and find items to help you save and heal. All the while you need to avoid a patrolling enemy and a number different ghosts haunting the school. White Day: A Labyrinth Named School’s jump scares aren’t particularly original, but they still managed to freak me out.

There are also a number of rooms that require you to solve puzzles before you proceed to the next location until you beat White Day: A Labyrinth Named School. Very cleverly, the game developers have made the puzzles somewhat random, which makes it harder to simply look up solutions online. The game’s AI isn’t particularly clever (don’t expect the learning Xenomorph from Alien: Isolation here) but that’s actually a good thing, because you manage to learn its patterns a lot more quickly. At the time, of writing, however, the game’s biggest issue is its plethora of bugs. A number of times during my playthrough, I encountered progression problems and weird glitches that sometimes broke the game. A number of patches have improved it, but the experience is still a buggy one overall. A couple more patches should resolve it, but it’s a definite nuisance.

White Day: A Labyrinth Named School’s story isn’t that appealing at first because a lot of the characters seem to be very stereotypical in their actions and motivations, but given some time you grow attached to them as more of their background is revealed. As with many visual novels and anime-themed horror titles, there are actually multiple endings, and your choices at certain junctures can take the story in different directions. I’m told there are around 35 endings you can access, which makes for a pretty layered story.

All things considered, White Day: A Labyrinth Named School is a solid horror title despite its bugs and any horror fan will likely enjoy it in his/her library. It’s got a very classic approach to game design, but it’s aged pretty well, and with some more patching it’s liable to become a PC classic.

White Day: A Labyrinth Named School was reviewed using a PlayStation 4 digital code of the game provided by PQube. The game is also available on mobile and PC and was originally released in 2001 for South Korea. We don’t discuss review scores with publishers or developers prior to the review being published.

• Lots of bugs and glitches
• Some clichéd elements

White Day: A Labyrinth Named School offers gamers an updated version of a Korean survival horror classic. The jumpscares can be a little hackneyed, and the plot a little clichéd, but the game offers a surprisingly deep and unsettling experience to those who are patient and willing to deal with the occasional bug. 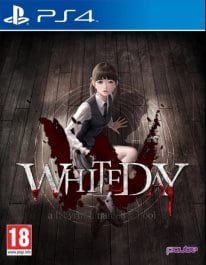