Games have really come a long way from their days as elaborate devices designed to separate children from their quarters, and now many people reason that games are more than just toys; they’re interactive experiences. In fact, some critics reason that games are a storytelling medium, and instead of just telling a story, you can live it. Well, Where the Water Tastes Like Wine is a game that doesn’t just involve storytelling; it *is* about storytelling. Well, less about telling them and more about collecting them. Let’s take a step back.

Where the Water Tastes like Wine is an adventure/visual novel game set in the early 20th century in America. It’s got a rustic 1920s theme filled with references to the great depression, the war, and prohibition. Except for this version of the 1920s also mixes in elements of mysticism, fantasy, and the supernatural. The plot starts off pretty simply. You take on a mysterious figure in a game of poker. Thinking you have the edge you go all in, only to find out that the mysterious figure is a talking wolf with some manner of magical powers. He tells you to go all over the US collecting stories. Thus begins your adventure. Oh and also for some reason he turns you into a skeleton so you don’t feel fatigue

The game’s got amazing writing and voice acting, and its story sequences are animated in a beautiful storybook aesthetic. Unfortunately, the sequences where you travel from state to state is less attractive. When travelling from area to area, you basically see a giant skeleton slowly traipsing around a map. It’s really slow, the movement feels clunky, and the graphics look blocky and unpleasant. You can slightly speed up your movement through a little minigame where you whistle along to the folksy soundtrack, which helps a little. You can also hitchhike and ride the rails, etc. but the bottom line is that getting around in this game isn’t fun. This is probably the biggest issue in the game; getting the stories can be rather tedious.

However, the stories themselves are incredibly diverse. At the heart of Where the Water Tastes like Wine is the idea that stories are remarkable and worth preserving, and virtually every place you go there’s a story to witness or here. The stories vary from curious incidents like an elegant woman in a small town dressed to the nines to eerie supernatural events like a hotel with Shining-esque twins watching you silently. There’s a choice element as well, and you can kind of shape the stories based on how you react (e.g. investigate, walk away, etc). The game really wants to bring attention to just how much can go on if you walk down a narrow path or knock on a door. Of course, the game isn’t trying to showcase how amazing the seemingly mundane can be; the world of Where the Water Tastes like Wine is populated with talking animals, spiritual visions, and the supernatural.

As you collect more and more stories you have the chance to tell them to strangers, and you can hear their stories in turn. Stories also develop over time; when you hear a story again someone may have added an element. The stories are sorted based on the classic Tarot cards; stories can be about things like family and memories, or they can be about loss and change. This classification system is important, because throughout the game you’ll be asked to tell stories to people you meet, and they’ll ask for stories of a particular variety.

All in all Where the Water Tastes like Wine is a game that wants to take you on a journey through a mystical depression-era America, and it seems like it’s trying to justify itself as a game rather than simply laying out the stories and having you read through them. Honestly, I would have preferred something a bit more focused on the visual novel format. While the game’s core mechanic motivates you to go out and experience as much as you can in this strange, folksy fantasy world, it feels like its other mechanics are working against you.

Having said that, I struggled on to explore the backwaters and towns of the US of A, and I still wanted to hear the stories. The game’s brilliant, colourful storybook look, its skilled voice acting, and its simple, yet moving stories all stand out, and it deserves serious credit for that.

Where the Water Tastes Like Wine was reviewed using a PC digital download code of the game provided by Good Shepherd Entertainment. The review was done on a PC running Windows 10, with an 8GB NVIDIA Geforce GTX 1070 fitted on a 4th Generation Intel i7 4790 3.6Ghz CPU and topped with 16GB of RAM. We don’t discuss review scores with publishers or developers prior to the review being published (click here for more information about our review policy).

Where the Water Tastes like Wine is an engrossing trip into 1920s America that brings its mystical - and sometimes dark - storybook setting alive. Its game mechanics don’t work as well, but it’s an amazing instance of storytelling in an interactive medium, and visual novel fans should pick it up

Review: Forgotton Anne
Be the first to comment!
Leave a reply » 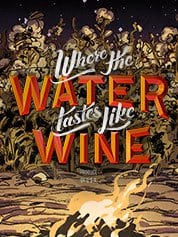