With a name like Under Night in-birth exe: late(st), you should have easily guessed it, this title is definitely a Japanese fighting game, courtesy of NIS America, Arc System Works (which recently worked on the awesome Dragon Ball FighterZ reviewed on our site), and Soft Circle French Bread (known for Melty Blood). Technically released originally in 2012 at the arcades, the game kept on adding letters, words and extra characters – on top of small additional features – throughout the year, after each re-release of the game on a new platform. After a port to PC, PlayStation 3 and even PlayStation VITA, it’s time for this fighting game to land on the PlayStation 4.

At first sight when starting Under Night in-birth exe: late(st), there’s a sense of a really classical and even old Arcade fighting game. The menu, quite austere, includes all the typical modes of the genre, ranging from Arcade mode to Survival, Time-attack, local and online versus and of course training. Everything is there, plus some revamped modes like Chronicle and Mission, but I would have probably liked a more original one, just to give some extra value to the game, but that’s just me being picky.

Passed the menus, you get straight into the business, with a roster of 20 character (4 newcomers from the previous release) and a combat system that is very simple: three buttons to hit (low hit, medium hit, strong hit), and a last one known as EXS Action. A fun one that latter function (which is set as X in standard controller configuration), whose usefulness varies depending on the characters, but mainly has the same core functionality of a super meter attack in other titles. The controls are simple, with normal and special hit coming out very easily, mostly based on quarter circles combinations, similar to other Japanese title in the genre.

However, Under Night in-birth exe: late(st) is not a fighting game that is so simple that it lacks difficulty, because once you get used to it, you’ll notice that it has many subtleties. For example, if there is no way to defend yourself once in the air, you can totally attempt an escape by pressing on back + EXS Action to dash out of the way; or if you feel confident, then use a chunk of your Grind Grid (GRD in the game) to gain the upper hand over your opponent. That GRD system is the unique strategic aspect of Under Night In-Birth, which is like a tug of war that fills throughout the match, with both ends being linked to each character playing. Depending on your actions, your gauge fills, while that of your opponent gets emptied, and if the one with the most square filled in the bar at the end of a 17-seconds timer will be able to enter the GRD Vorpal state. The later mode will make your character harder (10% damage boost) and will benefit of the Chain Shift, which slows down for a moment your opponent to counterattack, or to better defend yourself.

With a 20 characters roster, I must admit to feel a bit spoiled with this game. If at first the characters appear a little bland, after a few hours of play, you should have made your judgment on who’s going to be your pick. Certainly, their design is not as exuberant as the BlazBlue fighters, and they do not have the charisma of those of Street Fighter, but still are original in their own ways.

But the strength of the Under Night in-birth exe: late(st) roster is not in the design of those rosters, but rather in the fact that all are extremely different in terms of gameplay. You will not find duplicates or clones, and quite a varied archetypes. Sure you’ll find that iconic pair of rivals with Hyde and Akatsuki, the rest is amazingly original in the way they play. Most characters have a variety of moves to deal with different situations, like Waldstein with his iron claws that give him long reach, and even with his immense size can still move fast. Merkava, for her part, is able to fly, counter and grab at a distance, and swing balls of energy… And so on. You’ll find a roster that rather well balanced and heterogeneous, with varied combos that inflict the same damage.

This makes the fights in Under Night in-birth exe: late(st) frankly impressive. Very focused on the attack (despite the lack of an action to break the opponent’s guard), the screen is constantly filled by your character’s movements, and by the light effects released by their attacks. The fights are rather brief, but particularly intense, a feeling that should intensify as you and your friends master the game. The GRD gauge will take a lot of importance – and time to get used to – in the way you strategize in each fight.

This impression of dynamism is also magnified by an excellent soundtrack of the game. Some themes are well done, and there is a varied repertoire ranging from electro to metal that should please the greatest number. But it’s mostly the sound effects of the combat moves that caught my attention, packing one hell of a punch (literally).

On the technical side, there’s a bit of a disappointment on when it comes to the visuals, but at least it’s running at a constant 1080p and 60FPS. The fighters are well animated, but I wish the rest – arenas, menus, background elements – was actually painted with that same brush. The sprites lack a little precision, and the arenas, represented in 3D are rather ok in terms of rendering even with the newly added ones, but close enough to look a bit empty and crude.

Under Night in-birth exe: late(st) was reviewed using a PlayStation 4 digital code of the game provided by PQube. The game is also available on PlayStation 3 and PC via online stores only. We don’t discuss review scores with publishers or developers prior to the review being published.

• An original balanced and varied roster
• A simple game to get used to, but hard to master
• Full of your traditional game modes
• Stable and lag-free online mode
• That GRD Grid is quite an original gameplay mechanic
• Fun tunes and sound effects
• Fresh new content from the previous edition

Under Night in-birth exe: late(st) has been a fun discovery for me, in a genre that is full of big impressive franchise names. If the fans of the franchise are rare or rather niche, the game is still a fun addition to the fighting game repertoire, even if it lacks its personality and is overall crude visually for this generation. 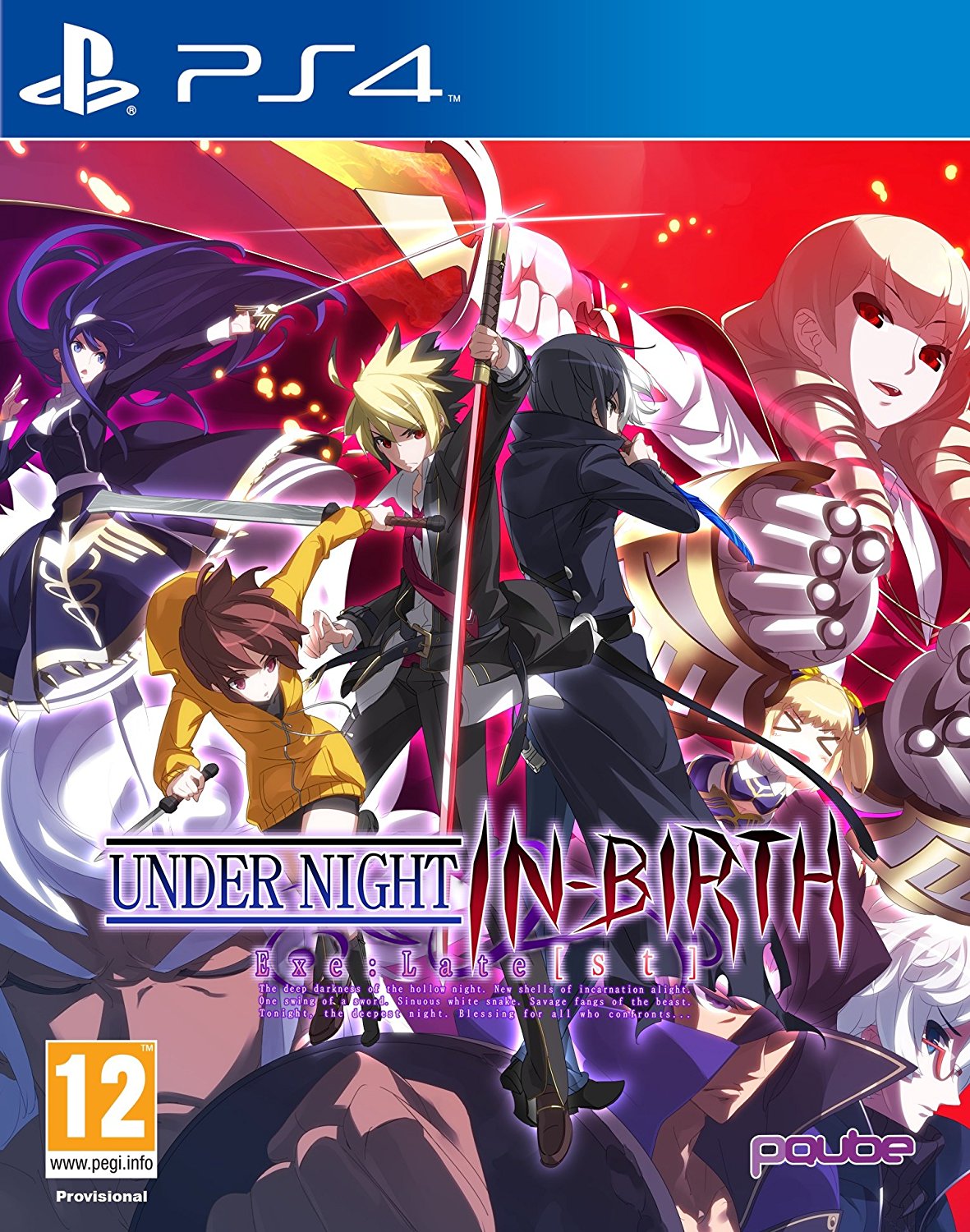