For those of you that never heard of 22cans, it is the studio founded by iconic developer Peter Molyneux, creator of Populous, Fable and the God game genre. After leaving his own Lionhead Studios back in 2012, the British developer teamed up with his partner Tim Rance to pen 22cans, which now gives us their third game known as The Trail: Frontier Challenge. A surprising concept influenced by Oregon Trail and the journey of a new pilgrims into the New World, the game has been out on mobile devices for over a year now as a free to play, and finally lands on Nintendo Switch.

The Trail: Frontier Challenge begins with a small cinematic scene that allows us to discover the setting of the story, as well as choose your own character from a bunch of presets. As you land on this new continent with nothing but a rag to cover your strategic body parts, players will learn that our character is here to find a better life and opportunities, with a backstory that you choose to tell. It’s via a bunch of letters you’ll be sending to your mother in your native country, that you’ll create your own story, by picking from an array of multiple options as answers to your mail. And so off we go on a long journey by foot to reach the young city of Eden Fall, in the hope of settling there and hopefully make a fortune, but things will not be easy. Fortunately a young women – Beatrice – will show us the way and introduce us to the rather simple gameplay of The Trail: Frontier Challenge, in a sort of tutorial session before leaving you be on your own.

As the name suggests, The Trail: Frontier Challenge is a game where our character will walk a long distance for pretty much the entirety of the title. At first it will be to reach the city, then to explore this new world and collect enough material to build new gear, which will allow us to progress in life. This walking simulator will have us cross all kinds of landscapes, cut regularly into segments thanks to camps to rest our feet and rivers that will require us to pay a fee of couple of cents to board a boat.

If the first couple of paths covered are easy, with an abundance of materials to collect with a simple touch of the screen such as twigs, rocks and more, it doesn’t stay that simple. Later on you’ll be challenged by other adventurer, or will need to reach a checkpoint in a certain time limit, which will push us to moderate our running ability which is not unlimited. You see, because the game is a simple walking simulator where your character follows a path without stopping, you can either run, pick up materials as explained above or do special actions to hunt or chop wood for example. Your running stamina gradually gets empty as we advance along the path, and faster as you run, if our bag of loot is too heavy or if the weather is bad. When all hearts are empty, our character will start to gradually slow down his normal pace until he eventually collapse of fatigue.

To prevent this from happening, your character will have to find something to eat in order to regain his strength, or optimally start wearing better equipment to help with longer trips. Better hats, coats, shoes and pants will have to be crafted thanks to the materials gleaned on the trail, or acquire them thanks “Frontier Challenges”. Those crafting recipes will need to be purchased or learned thanks to a fun skill tree known as your Almanac, which gives you access to more array of things to collect, or the ability to hunt for pelt, and eventually build more resistant and elaborate attires. Of course you can also acquire equipment by spending your money from merchant, but grinding a bunch of trails and crafting will help your progress without breaking the bank. But how do you gain money?

Well as I mentioned, your journey will be filled with camping sites that act as a way to take a short break, but also so you can enter a minigame to trade with other trail characters. The way it works is that you have a conveyor belt that ends with a grinding machine, and you toss things you don’t need in 4 different phases, or those that earn you extra cash depending on the phase of the minigame. But you can also at the same time take items that other players tossed on that belt in exchange of cash, to hopefully and strategically drop in later phase that give you a boosted multiplier. For example, if I see a bunch of rabbit fur on the belt, I can gamble by taking them, in hope that those will give me double the amount of cash in the garment segment.

Nevertheless, the game doesn’t end at those endless trails and trade minigame, as once you reach Eden Fall, you’ll have to buy a home and choose a profession to make a better living. That town becomes a sort of guild, where other players will take part of its growth by collecting items and money, which will open up more features like a town hall or bank. Your choice of a house location is linked to the craft you want to master, whether you want to be a weaver, tanner, carpenter, stonemason or blacksmith. But this choice will have little impact on the future since the town works in solidarity, and you can for example visit your neighbor’s weaver and use his equipment to get what you need. There is also an element of RPG, as your house can be subsequently upgraded and even furnished, to get significant bonuses such as better durability of your clothes or a boosted stamina for our upcoming trail expeditions.

Nevertheless, the game quickly becomes repetitive, despite the upgrade possibilities, and the variety of missions to finish for Beatrice don’t really add that much to the game’s difficulty. It is after all a title built original as a free-to-play concept, and the port to the Nintendo Switch is not perfect technically speaking, with some random framerate drops and stutter for no reason whatsoever, especially considering it’s not a demanding game on the graphic engine front.

The Trail: Frontier Challenge was reviewed using a Nintendo Switch digital download code of the game provided by 22cans. The game is also available on PC, iOS and Android devices in digital releases. We don’t discuss review scores with publishers or developers prior to the review being published (click here for more information about our review policy).

• Gets tedious after a while
• Random stutters and framerate drops on Nintendo Switch.

If the core gameplay mechanics becomes quickly repetitive and boring, The Trail: Frontier Challenge is still an original game from 22cans and Kongregate. I would advise you to try it on mobile devices first, before jumping the gun and get this console version especially with a $15 price tag. 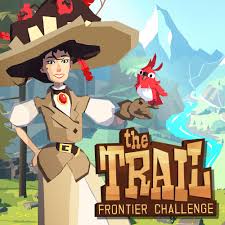