Review: The Swords of Ditto

Indie games are, in many ways, the products of a generation that grew up on the classics. Thus, indie games are often pretty heavily inspired by classics like Mario, Sonic, Castlevania, etc. What I still haven’t seen enough of, however, are games that are inspired by the Legend of Zelda (Binding of Isaac doesn’t count). There’s no shortage of Zelda praise online, but I still want to point out how incredible the series is. While it might not be the most popular opinion, I actually prefer the classic top-down Zeldas to the 3D titles in the series. The developers of The Swords of Ditto also have a preference for top-down Zelda, as their game takes a ton of cues from the seminal masterpiece. But does The Swords of Ditto do enough to jump off from the classic and become its own work? Or is it just an indie version of Zelda (full disclosure, I’d be cool with that, we could use one)?

Well, to begin with, The Swords of Ditto is very similar to Zelda. If imitation is the sincerest form of flattery, they’re flattering Zelda silly. You go through dungeons, it’s in a top-down view, you have a sword, a bow and arrow, and throwable bombs, there are shrubs you can cut down, etc.

But of course, these are mainly intentional similarities; more nods than anything. The similarities to Zelda are very deliberate, so it’s not as if they cribbed Zelda, more than they pay homage to it.  The game very much does its own thing when it comes to the theme. While Zelda adventures are typically rather serious and epic, The Swords of Ditto is cartoony and charming, favoring a goofy Saturday morning cartoon look and feel. The humor is silly and approachable, and I found myself chuckling more at the cheesiness than the actual jokes. It really evokes the sensation of shows like Fairly Oddparents and Gravity Falls. The real star, however, is the art style. Swords features a charming, detailed world which is painstakingly crafted. Seriously, I think they hand-drew the leaves.

The other way the game jumps off from Zelda is not one I like very much. After checking the ‘inspired by 16-bit classics’ box, The Swords of Ditto went right onto the ‘roguelike’ box. One of the reasons I feel like we’ve never seen a game reach Zelda’s heights in the indie scene is that one of Zelda’s biggest feats has always been its stunning level design. Considerably smaller indie studios don’t have the resources to craft intricate levels like the ones in OG Zelda and Link to the Past, so they do the usual thing; they just randomly generate content.

In The Swords of Ditto’s case, it’s not so bad, but it also means the dungeons lack any real appeal. In fact, dungeons felt like they were too big in terms of navigation, and sometimes I found the layout to be a little tricky. While some roguelikes like Binding and Spelunky make random levels that end up somehow being as awesome as designed levels, The Swords of Ditto’s levels just felt messy at times. The combat is fun and responsive, and I enjoyed taking down baddies with the ‘toys’.

The Swords of Ditto decides to go the Spelunky HD route with its roguelike format, crafting a narrative that explains how you die and then starts the adventure again but with new levels. Essentially the evil witch Mormo shows up every 100 years and wreaks havoc, and every 100 years a new hero rises up to try and take her on. A new hero is called on every 100 years, and upon picking up The Swords of Ditto, s/he becomes the new Sword of Ditto, having five days to stop her, meaning your runs are timed. It’s cute and clever, but it wears very thin soon enough, as you have to kind of go through a portion of the intro every time. Unlike other roguelikes where you can quickly jump back into the action, Swords has you mosey on over to the dungeon every time you take on the role of a new hero. That wouldn’t be so bad if not for the fact that you barely carry over any of your gear when you die. You get to keep your level and some cash, but aside from that, you lose some great gear. And the level feature actually works against you, as enemies scale, meaning you gain little after every death, and there’s a big ol’ reset button.

The Swords of Ditto does a good job creating a fun, light-hearted world, but it doesn’t let you play around in it, focusing more on the grind and the time limit, which just end up being frustrating

The Swords of Ditto was reviewed using a PC downloadable code of the full game provided by Matt Bitner Games. The game was tested on a PC running Windows 10, with an 8GB NVIDIA Geforce GTX 1070 fitted on a 4th Generation Intel i7 4790 3.6Ghz CPU and topped with 16GB of RAM. The Swords of Ditto is also available on PlayStation 4 via digital store releases.  We don’t discuss review scores with publishers or developers prior to the review being published (click here for more information about our review policy).

• Too much time between runs
• Not enough progression after each death

The Swords of Ditto is a charming, beautifully illustrated dungeon crawler with goofy but loveable characters and fun combat, but its roguelike design makes it feel grindy at times. It’s still enjoyable, but it certainly needs some tweaking to improve balance. 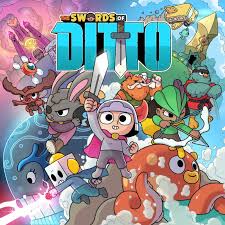