Oh Dark Souls, we’ll miss you. With Dark Souls 3’s last DLC releasing a couple weeks back, From Software closed the book on its legendary RPG/Controller Breaking Machine. Don’t worry though, because a handful of other games are stepping up to fill the immense armored shoes left behind by the series. The most recent member of the ‘trying to do the Dark Souls thing’ club is The Surge. Like a lot of games that are similar to Dark Souls but not quite the same, The Surge eschews Souls’ classic free-form RPG structure and gives you a set story with a protagonist. You play as Warren, a paraplegic man who approaches the shady Creo Corporation to gain the ability to walk again. They begin a procedure to graft on an exo-skeleton, something goes wrong, yadda yadda. Right off the bat, Surge does not win any points in the story department. If the bit about the shady corporation sounds familiar, prepare to see a number of other clichés. I found myself skipping cutscenes more than once, and I was happier for it.

The Surge’s gameplay is, of course, very similar to that of Souls. You get two attacks (vertical and horizontal), a dodge, a block, and medpacks for healing. You choose between two builds: an agile build and a tank build. However, I have to say both builds felt pretty similar in that combat feels really heavy. The weight of your strikes is a good thing and a bad thing. On the one hand, it feels meaty and brutal. On the other, it never manages to become as fluid or agile as Souls combat.

I’m going to stop talking about how The Surge doesn’t live up to Souls and focus on some of its innovations. One major change is the ability to target enemy limbs. Most enemies, not all, have various body parts that can be targeted. Most the enemies in The Surge are humanoid, so you can target legs, arms, heads, torsos so on and so on. So you can target a particular limb that’s weaker and then rip it off with a finisher move, usually giving you new gear. This is a fun mechanic in that it feels really violent and gory so you get that thrill of destruction, but it’s actually a bad idea because they didn’t figure out how to switch between enemies once you lock onto an enemy’s limbs.

Of course, you use gear and salvage (The Surge’s version of souls) to upgrade your gear, and there are some decent customization options. While The Surgepresents some depth in its combat, the world design is almost completely devoid of it. While initially the environments seem cool, as the sci-fi setting allows, near the end you’ll grow weary of the same old industrial catwalks, metal doors, hallways, corridors, and random vent shafts. The game does lackluster job of explaining where you are in the world. This may be my inability to best guess where I am, or simply the environments just look too similar. But in Dark Souls fashion, The Surge does implement shortcuts. This makes every area much easier to traverse, especially if you are defeated (and you will be) by the bosses.

Dark Souls always had a penchant for giving you massive beasts of bosses, and The Surge is no different. Most foes tower over Warren and easily kill him in 2-3 hits. But, just like its inspiration, there are patterns to be learned here, and once you give it a few goes, any boss can be bested. The boss design range from a typical Mech to interesting Waste Disposal bots. I felt the boss fights were a definite strong point for The Surge.

While The Surge may never meet the inspirations lofty ambitions, it manages to be fun. The combat is good and gory and takes advantage of its limb targeting system. The bosses are great, and hard. If difficulty is your thing, The Surge delivers. I’d say it’s the kind of a game you can burn through on a weekend if you want a simpler combat RPG experience.

The Surge was reviewed using a PC digital copy of the game provided by Focus Home Interactive. The PC version was tested by Mazen Abdallah on a PC running Windows 10, with an 8GB NVIDIA Geforce GTX 1070 fitted on a 4th Generation Intel i7 4790 3.6Ghz CPU and topped with 16GB of RAM. The game is also available on Xbox One and PlayStation 4 in both digital and retail stores.  We don’t discuss review scores with publishers or developers prior to the review being published.

While it doesn’t live up to the reputation of a Dark Souls, The Surge has a lot of its own ideas, and they make for a solid action-RPG. It has some rough edges, but when you get the hang of the combat, you’ll find it delivers some seriously challenging violence, and you’ll get a little carried away dismembering your foes.

Mazen enjoys anything with over-the-top violence, dark humor and a real challenge. He's still pretty big on single-player games and he's always looking for new titles he might've missed out on, so if you know about a crazy new title that's flying under the radar, look him up!
More Goodness
ActionAction RPGAdventureDark Souls 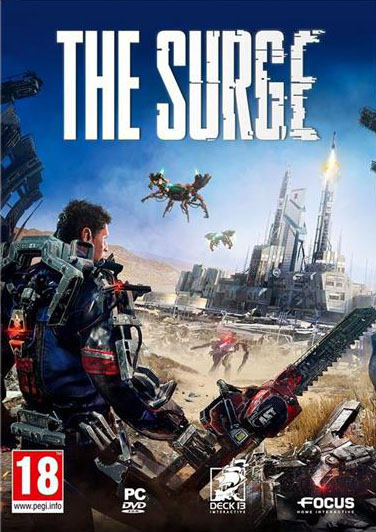