Better known in the West as Seven Deadly Sins, Nanatsu no Taizai is a fantasy action manga created by Nakaba Suzuki set in a weird “Middle Age” era land of Britannia. Thanks to its overwhelming success, the manga has been adapted to an anime as part of Netflix’s long time strategy of getting exclusive content, and this year the media expansion continues with The Seven Deadly Sins: Knights of Britannia, an exclusive PlayStation 4 game (although I should note that a previous game was already done with the franchise on the Nintendo 3DS only for Japan). The question now is: will the Western audience be delighted by Meliodas and his merry troupe’s videogame adventure?

The Seven Deadly Sins: Knights of Britannia, as most videogame adaptation, is a continuation of the main manga storyline:: the Liones Kingdom is in danger and Elizabeth Liones, one of the king’s daughters, is looking for Seven Deadly Sins, a group of knights that used to serve the royal family before they were ousted by the Holy Knights. Luckily, she finds Meliodas, the captain of the Seven Deadly Sins, knowns as the Dragon’s Sin of Wrath, who is living his life now as an innkeeper of the Boar Hat, which will mark the beginning of a crazy adventure full of violent fights. Now heads up! For you to really enjoy The Seven Deadly Sins: Knights of Britannia as a game, it is crucial to have read the manga or watched the anime because unfortunately, the game’s storytelling is simply sloppy.

Unlike other anime and manga adaptations, such as the marvelous Naruto Shippuden: Ultimate Ninja Storm which I’m a huge fan, The Seven Deadly Sins: Knights of Britannia has a storytelling structure that is just chaotic and vague. The conversations between characters are content with the minimum, with many details ignored, and the cutscenes are really crude in terms of technological feat. That’s mostly because characters are barely moving or speaking, almost like robots devoid of emotion, with even scenes where no facial expressions occur in crucial dramatic plots. Difficult then for those who do not know the franchise to be interested in history, even if they are actually interesting in the manga.

If the characters are well rendered and faithful to the anime series, and some of the visual effects are great, I’m really annoyed by the environments or fighting arenas. I get that it’s an adaptation of an anime and manga, but it makes the characters look awkward, as they are designed with cell-shading model techniques, yet everything around them are PlayStation 3 era textures and harsh designs. At least on a technical point of view, the game runs smoothly, with some small drops in the framerate when it’s too crowded, or there’s a deluge of special effects on screen.

The Seven Deadly Sins: Knights of Britannia presents itself as a curious mix between a fighting and action game, a bit like Naruto Shippuden Ultimate Ninja Storm 4 and similar titles in the series. First, you explore Britannia via a map which you access in the Boar Hat, and can then pick various missions and quests directly in the field or through your visits to villages. It’s one of the few aspects of the game that are rather correct, with a nicely detailed map and a great accompanying soundtrack, but its mechanics are also something that slows down the pace of the adventure more than anything else. In any case, you get access to three types of missions or quests, with the first being some sort of “exploration” themed one with Princess Elizabeth, looking for key items with very basic gameplay mechanics, that can get extremely boring. Fortunately, there are not many missions of this kind in the game.

Then you have major clashes against hordes of enemies, such as simple platoons of soldiers. If you were finally expecting joy like a more dramatic version of Dynasty Warriors, then walk away. The Seven Deadly Sins: Knights of Britannia use the Musou mechanics as well, with a difficulty almost absent, enemies with limited movement and an artificial intelligence that clearly could use some tweaking. I spent my time hundreds of enemies in the most carefree way, without the slightest sense of danger, except when there’s a time countdown.

While the manga and the anime show epic and frenzied battles, the game didn’t manage to portray this when you battle the Holy Knights (your rivals if you want). The combat system, inspired by the likes of Naruto Shippuden: Ultimate Ninja Storm, is the same as the one against basic enemies, enough to disappoint a bit when finally facing the real proper foe. You can move, block, dodge quickly, use a fast, strong, or ranged attack, plus three special techniques, and finally an ultimate attack that cause massive damage. On paper, it sounds good but alas, The Seven Deadly Sins: Knights of Britannia has neither the complexity of a fighting game nor of an action game worthy of the name, limited to the bare minimum. Plus, don’t get me started on the input lag!

If some special moves can provide a glimpse of excitement, especially with the short-cutscene powered ultimate attacks, and not to mention destructible sets which are well done, I did get tired pretty quickly due to numerous issues. Like the “minions”, the major enemy AI is just too dumb even with the highest difficulty, allowing me sometimes to abuse some gameplay mechanics to pretty much get a perfect score. While this can get boring, it’s not as annoying as the camera engine that is often misplaced, a lack of clarity in the action because of a shower of special effects, but also really rigid animations that basically ruins the immersion.

As you probably got by now, The Seven Deadly Sins: Knights of Britannia’s gameplay is not the most exciting one. Even for an adaptation of a another media franchise, which limits the freedom of creation, I clearly saw better. And so comes the struggle to finish the adventure mode which is quite short (10-15 hours), whose only benefits in the end is to unlock more characters for the Duel mode (the game’s version of versus mode). The latter contains 25 characters in total, but considering that most of them are played the same way and there are three versions of Melodias (reminds me of the numerous amount of Naruto versions in his own games), you quickly get through all of the game’s content.

The Seven Deadly Sins: Knights of Britannia was reviewed using a PlayStation 4 digital code of the game provided by Bandai Namco. We don’t discuss review scores with publishers or developers prior to the review being published.

The Seven Deadly Sins: Knights of Britannia is a disappointing game for fans of Nakaba Suzuki anime, and doesn't have enough to even appeal to fighting or action game fans. 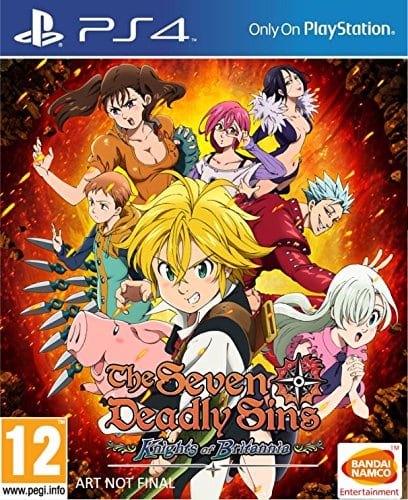