Throughout their start, California based WayForward studio has become quite a known name when it comes to 2D platformers with a retro look. After their recent release of Shantae: Half-Genie Hero (which we reviewed on our site) on the Nintendo Switch, we turn our eyes to their latest creation: The Mummy Demastered. Based on the recent The Mummy movie starring Tom Cruise, the game is more than just an adaptation of a Hollywood licence, taking the form of an old-school Metroidvania inspired by the 16-bit era.

In terms of script, The Mummy Demastered is your typical cliche from a movie-licensed game. The game puts you in the shoes of an elite agent of the Prodigium organization introduced in The Mummy movie, specializing in the hunt of monsters and demons, to protect humanity, mainly from the supernatural hordes of mummies sent by Princess Ahmanet. The latter is a cursed entity from the Ancient Egyptian mythology (linked to the goddess Amunet) that wants to rule the world with Seth (god of death), and so one Prodigium members is sent there to find his lost teammates and eventually battle the Princess. Your adventure will take you through a variety of regions such as old tombs, woods, abandoned tunnels, but also in the cursed streets of London. Without being particularly complex, the script of The Mummy Demastered is primarily a sidestory from the movie main timeline, and a pretext for exploration, which is the main mechanic of this WayForward game.

Like the hits of the 16-bit era and the reign of the Super Nintendo, The Mummy Demastered consists of a single giant map, linked together by way of waypoint and quick travels, and your access to new areas is possible by obtaining key items, skills or even beat bosses. Like a true Metroidvania, the amount of treasures, weapons and other relics to find, plus the the arrangement of levels greatly encourage exploration. Because, in addition to these treasures, exploring every nook and cranny of The Mummy Demastered will  set you with new weapons and health improvements, ranging from assault rifle to flamethrower, not to mention the inevitable grenades. You can also unlock, kit improvements allowing you access to new areas, ranging from enhanced speed, higher jumps, which will work perfectly for Metroidvania fans’ desire to find every spot in the map.

The bestiary and enemies are quite ranged, almost better than the movie, consisting of mummy/zombies, large insects, and more. The boss phases are also very well done and enjoyable to play… Even if a bit too hard in some occasions, but yet remain fair.  It is important to stop at a specific mechanics of the game, namely the way The Mummy Demastered handles death. When your character dies, he will be lost to the control of Princess Ahmanet and so another Prodigium agent will be sent to continue to job from the last save station. Sadly, you will then have to find and kill your fallen teammate yourself in order to get your hands on your previous equipment. If this game mechanic is original, I must admit that it makes the task tedious at times, especially when you die during a boss fight and you have to recover your gear right in the midst of that battle. Nevertheless, from a general point of view, the title is a really enjoyable challenge, with enemies pouring in from all directions, with an old-fashioned 8-way aiming system that does nothing to simplify things.

On the point of view of its artistic direction, The Mummy Demastered is based on a retro style in all of its glorious era days, full of noticeable pixels, yet still eligible and nostalgic especially on the front of monster and creature designs, as well as the weapon effects and explosions. The whole is pretty complete thanks to a soundtrack that fits to the mood, full of mysticism, but can get on your nerve during long playthrough sessions.

The Mummy Demastered was reviewed using a Nintendo Switch downloadable code of the full game provided by WayForward. The game is also available on Xbox One and PlayStation 4 via digital store releases. We don’t discuss review scores with publishers or developers prior to the review being published.

• Lots of weapons, features and secrets to unlock
• A retro-styled metroidvania
• Original in terms of its artistic direction
• Long lifespan
• Difficult but fair

With The Mummy Demastered, WayForward offers a compelling and enjoyable Metroidvania that is full of secrets and incentive for exploration. If some mechanics of the gameplay deserved to be modernized like the aiming, The Mummy Demastered is a clear home of the 16-bit era Metroidvanias, and a great pick for your Nintendo Switch (or other platforms). 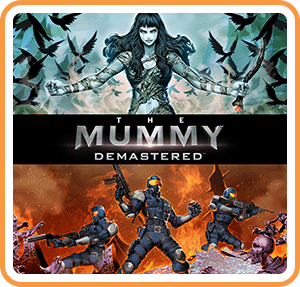