Ah, the spy game. Espionage, cloak and dagger, the whole lurking in the shadows deal. Well, actually that’s not always the case. Some spies are actually kind of boring, and they do most of their work using phones and cameras. The Low Road features this sort of spy.

The Low Road opens with the bright young rookie Noomi taking a corporate espionage gig with an auto company. She’s told promptly that fieldwork is not really that necessary in the hot new age of technology (the 70’s essentially), and that she’d better get used to working the phone and using a pad and pen as her weapons. Disappointed at the prospect of pushing paper, Noomi has to hustle to actually get into the field.

In terms of story and setting, the low road is definitely a breath of fresh air. Point and click adventures and visual novels are much more diverse in terms of their storylines, but even so, it’s a pretty unique concept. Moreover, the game has a ton of humour and heart. Characters are often cartoony and a bit over the top, but they’re pretty well developed for the most part. Ironically, I felt like Noomi’s character didn’t have that much going for her. She has an arc of sorts, but on the whole, I was much more interested with her grizzled superior Turn, who are shrouded in mystery from the get to. I think it’s a pretty typical feature of some stories; the protagonist kinda gets left by the wayside.

The developers of Low Road definitely have good taste in puzzle adventures, because you can see the DNA of lots of classics here. There are dialogue-based puzzles that are reminiscent of the verbal jousts in Monkey Island, everyday object puzzles that bear a resemblance to Grim Fandango’s office antics, and information collection puzzles that remind me of Papers Please. Of course, the game does its own thing for the most part, and you get the sense that the puzzles have a more distinct style towards the end when they’ve become more fleshed out.

I felt like most of the focus in the game was on being sneaky and underhanded. Thus, many of the challenges involve picking the right lie to tell in a scenario and working out how to get around obstacles. The game manages to feel incredibly realistic and grounded because you play regular people using their wits to get by security and fool folks in uniform. Sneaking around where you’re not meant to is a massive part of point-and-click adventures, and Low Road definitely spends a lot of time putting you in the shoes of the clever devil who needs to get where they’re not meant to.

However, The Low Road has some problems in its implementation. For starters, some of the puzzles feel a bit lackluster through the midsection of the game, and others end up feeling a bit confusing. I ended up wishing the game did more with the spy game premise; a lot of the puzzles don’t feel like they keep with the theme too much, and it’s almost as if they can be tossed into any adventure game. The opening puzzle where you look through papers to con a lady over the phone is very engaging, and I feel like there’s not enough puzzling that’s similar to that. Many puzzles involve simple mechanical tasks like connecting pipes or messing with machines.

In the end the game, takes players on a slick ride through the stylish world of 1970’s corporate espionage, and I definitely enjoyed it

The Spectrum Retreat was reviewed using a PC digital download code provided by Ripstone Games. The game was tested on a PC running Windows 10, with an 8GB NVIDIA Geforce GTX 1070 fitted on a 4th Generation Intel i7 4790 3.6Ghz CPU and topped with 16GB of RAM. The game is also available on Nintendo Switch via digital store release. We don’t discuss review scores with publishers or developers prior to the review being published (click here for more information about our review policy).

• Some puzzles feel repetitive
• A bit on the short side

The Low Road is a light romp through corporate espionage that features a great cast and top-notch writing, as well as some very compelling moments. Its puzzles are a bit lackluster at times, but it’s still a great way to pretend you’re a 70’s spy.

Mazen enjoys anything with over-the-top violence, dark humor and a real challenge. He's still pretty big on single-player games and he's always looking for new titles he might've missed out on, so if you know about a crazy new title that's flying under the radar, look him up!
More Goodness
2DAdventurecomedyFeatured

Review: Dragon’s Crown Pro
Be the first to comment!
Leave a reply » 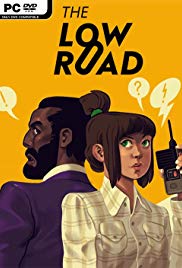