You know, you’d think criminals would have the good sense to stay locked up after they’re thrown in prison, but the pesky buggers are always trying to break out. No matter how hard we try and make it for them, they keep trying. I think it’s because they’re so persistent. That’s what you need to break out of prison, after all; persistence. The developers of Escapists definitely agree, because their game is all about being persistent, and they continued with the Nintendo Switch version known as The Escapists: Complete Edition.

The Escapists: Complete Edition is a simple pixelated indie about escaping from a prison using a variety of games. Now I must confess, from the get-go I’m a little confused as to why The Escapists even came out on Switch, considering the fact that its sequel (which we reviewed recently) has been out for a while, and I think the latter is a bit more polished. I suppose Team 17 figured some people liked the original better.

At its core, The Escapist: Complete Edition is a game about routine. You’re thrown into a prison and expected to follow the daily routine of a prisoner, moving from roll call to meals to your prison gig. Along the way, you meet other prisoners and pick up little jobs from them to get some cash, and you have a few places where you can pick up loot. While the game’s opening tutorial does a pretty good job explaining the basics (like moving around, using inventory, etc.), after that you’re pretty much on your own.

Now, this is a good thing in that it pushes you to explore more and sorta work out what your options are. It’s a bad thing in that it’s a bit *too* broad. You do kind of put together a lot by just sandboxing it up, but after a while, you’re just kinda doing the same thing over and over again. The Escapists: Complete Edition is really a mish-mash of lots of game elements. You’ve got basic crafting which allows you to make new items. There’s a sort of RPG element whereby you level up your stats, but it involves so much grinding you’ll think you’re a pro skater. I’m really not exaggerating, you level up each of your three stats (intelligence, speed, and strength) by mashing or pushing buttons.

The thing is, whether inadvertently or not, the game ends up kind of replicating the dullness of prison. Many documentaries and films point out that one of the worst parts of prison is how repetitive and boring it can be, and The Escapists: Complete Edition does kind of capture that. The daily routine is maintained strictly, and you’re expected to adhere lest you draw the ire of the guards. Aside from your ‘fatigue’ and ‘health’, there’s a ‘heat’ meter which measures just how cross the guards are with you, and failing to keep up with the routine can get you their ire.

Having said that, the guards are surprisingly easy to get around. This is because the game’s AI is really not that focused. If guards get angry with you, they’ll chase you around and then you can run in circles to lose them Benny Hill style. Sometimes starting a fight with one guard will get another to intervene, others they’ll just mind their own business. And sometimes you’ll get away with something really cool and the game will automatically ‘catch’ you despite nobody seeing you do it.

In many ways, the game feels wonky and wibbly wobbly. And yet I can’t stop playing it. Like many indies, The Escapists: Complete Edition is unpolished in a ton of instances but still ends up feeling engaging. I think it’s because despite all the wishy-washy lack of direction, you still know what you need to do and you’re working towards a clear goal. After spending a few hours (and cheating a bit by consulting the wiki) I have a good idea of what to do.

The Escapists: Complete Edition is a game that definitely has a ton it can work on, but it’s still a game that will likely grab hold of you and mess with your head until you can complete its various escapes. This Switch edition features an absolute boatload of content, and you’re getting a mess of DLC for the asking price, so there’s no chance you’ll run out of daring escapes to pull off.

In some of the ‘hard’ levels, however, the game just ends up feeling unfair. The thing is, one of the worst things about Escapists is how much it relies on what we in the game community call RNG. Essentially, getting items is probably the most important thing you do while plotting an escape, and it’s pretty tricky to get good items if you’re outta luck. This is where the wait comes in. But while the easier modes offer you lots of chances to get gear, in hard mode you risk your neck more to get it, and if the RNG angels don’t have your back, you’re outta luck. Again, having said all that, Escapists is still a hell of a game.

The Escapists: Complete Edition was reviewed using a Nintendo Switch digital download code of the game provided by Team 17. The game was previously launched and is available on PlayStation 4, Xbox One and PC via digital store releases. We don’t discuss review scores with publishers or developers prior to the review being published (click here for more information about our review policy).

The Escapists: Complete Edition is unpolished in many regards, but under that rough lies a diamond that will shine brightly and hook you for hours. Its flaws end up working in its favour as you start feeling the desperation of a prisoner who’s just tired of being stuck, and eventually you need to use your wits and a little bit of hustle to get the job done. 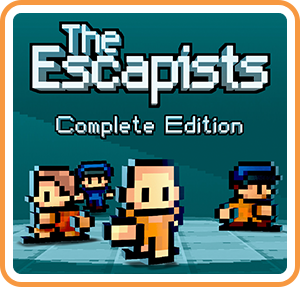