Editor’s Note: More than a year after the game’s original release on Xbox One (and other platforms) as The Elder Scrolls V: Skyrim Special Edition, this review has been updated by Nazih Fares following the release of the game on the Nintendo Switch as well as the updates to all customers which reflects on the overall score, and final verdict.

Back when the first Nintendo Switch reveal happened, I was more than surprised to see the illustrious and acclaimed The Elder Scrolls V: Skyrim as a planned release for the console. Sure, everyone got a glimpse that the game was coming, but it wasn’t until a month or so later that Bethesda officially confirmed bringing the game to the Nintendo Switch. For the publisher, which has been highly supportive of the Nintendo new console (with the previous release of DOOM which we reviewed), the goal has been simple so far: make sure the game runs as good as it can get on the Nintendo Switch, without ruining the overall experience.

While I’m wasn’t really worried about the technical feat of Skyrim on the Switch, which Unlike DOOM is not as demanding, it still impressive to see the game on the Nintendo Switch. Despite its rather large download size (around 14.5GB with the most recent patch), expect a balance between the PlayStation 3 and Xbox 360 era performance and visual fidelity, locked with a solid 30fps. If you play on the Nintendo Switch tablet you will not notice the difference and you will be surprised by such beauty. On the other hand, if you switch to TV mode, the more avid fans of Skyrim will be able to see a slight graphic downgrade, but it doesn’t hurt the gameplay. My only problem is that on the handheld mode, the small screen doesn’t help with menu descriptions and some other texts that become rather unreadable, but the overall fluidity is an overall good experience.

The main strength of The Elder Scrolls V: Skyrim on the Nintendo Switch is an obvious one: portability. It’s a great exclusivity for the Japanese console, which will help a lot with the decision of many potential buyers. On the other hand, I think the game could use a bit of refining on the front of its motion gaming compatibility. I got nothing against waving a bunch of Joy-Cons in front of my TV, but with a gameplay as ambitious and rich as it is in Skyrim, it doesn’t really work.

In the end, this port  raise an important question: is it still worth it to replay Skyrim six years later? Well, for newcomers to the series, it is, even if the game looks old, it still retains this undeniable charm, unwavering generosity and an immense wealth. Getting The Elder Scrolls V: Skyrim is the assurance of having hundreds of hours worth of quests plus more, since the game on the Switch includes all of the previously released expansions such as Dawnguard, Hearthfire and Dragonborn. And if you’re one of those that collect Amiibos, you’ll be happy to learn that those interactive figurines will open extra loot chests in the game, with the highlight of the show being for Link from the Legend of Zelda. The latter unlocks the Hyrule hero’s sword, shield and even tunic.

Bethesda Softworks has managed to capture the attention of all of us gamers at their E3 2016 conference, with a range of new titles coming soon including Dishonored 2 (which I will be reviewing very soon), Prey, Quake: Champions and more. But the biggest surprise was the announcement of The Elder Scrolls V: Skyrim Special Edition, the remaster of the original game released back in 2011, which for many players is considered the best of the franchise. So is this remaster as good as the original or is it there to grant Bethesda’s studio some time to work on the next Elder Scrolls?

Back in 2011, The Elder Scrolls V: Skyrim has marked many players and became one of the best RPG in recent decades. The adventure is just an endless quest of awesome task across Skyrim, where you face dragons, giant spiders, battle through labyrinth and dungeons and so much more… I should note that this is not a review of the game, but just a focus on this remaster, so if you need one then go ahead and read Sparkileptic’s feature on Region 2’s website. In any case, many expected an announcement at E3 2016 about a sequel, but Bethesda has decided otherwise and unveiled this remaster of The Elder Scrolls V: Skyrim for the current console generation (Xbox One and PlayStation 4), but instead of just porting the PC version, they added a novelty that will interest many hardcore Skyrim players: mods. For Bethesda, the addition of this feature has been very hard when applied to Fallout 4 recently, and while it’s taking more time for PlayStation 4 users to get that feature, mods are at launch on both consoles with The Elder Scrolls V: Skyrim Special Edition.

Another strong argument is to provide improved textures for the delight of the players. The graphics of the title has been reworked by the Bethesda teams and should allow us to plunge us back into a more beautiful universe in our memories. So this Special Edition Skyrim it worth the money or is it just a remaster tasteless? Response in this test.

As soon as you boot up The Elder Scrolls V: Skyrim Special Edition, you realize it is really more beautiful than on the older generation consoles, especially if you never played the game on a high-end PC. Whether it is in the details of faces, buildings in the cities or the more elaborate lighting effects, everything seems to have been embellished for this remastered version. The game world seems alive and exploring the Skyrim tundra becomes a much more pleasant experience than in the past. But exploring ancient Nordic ruins and solving deadly puzzles will still be a deja-vu, because after all when it comes to the content of the game, there is no real novelty in this remaster, other than adding the three DLC that were released including Dawnguard, Hearthfire and Dragonborn, which could be new for some (or not).

However, this is not really a negative point, and most remastered are indeed just a facelift of their original release, but the true point behind them is to appeal to newcomers, gamers that missed the original release and want to experience the game with current generation graphical and technical trends. In this case, The Elder Scrolls V: Skyrim Special Edition framerate got stabilized in much better way than the old version (especially if you played it on PlaySation 3), locked at a fluid 30FPS, with no slowdowns during sudden camera movement, or when so much action going. Moreover, loading times are also faster, which will relieve many veteran players that endured them, almost to the point of destroying the immersion for some, especially coming in and out of cities.

An important thing you should know is that this remaster does not change enough the animation ranges or the AI of characters, which are kept as they were. The NPC characters continue to move according to their movement loop and sometimes just hang out in a room for no reason, but again, mods are there to solve this problem. And for those that want the “true Skyrim experience”, this remastered version still has all the sily bugs that created so many memes of our gaming generation, like a soldier trying to shoot an arrowthrough a wall, but at least nothing that will break your save.

As mentioned above, many mods are there to add interesting and most useful features, such as removing the loading time when you arrive in town or simply add more life to the game. You can find mods allowing you to play new quests, or even be silly and transform the dragons into unicorns for the fun of it. In all cases, the mods are present on consoles and they work, providing access to a privilege that was only granted to PC gamers.

The Elder Scrolls V: Skyrim Special Edition was reviewed using an Xbox One and later on a Nintendo Switch downloadable code of the game provided by Bethesda Softworks. The game is also available on PlayStation 4 and PC in both digital and retail stores, and the original version was released on Xbox 360, PlayStation 3 and PC in 2011. We don’t discuss review scores with publishers or developers prior to the review being published

• It's Skyrim on the go!
• All previously released DLCs included
• Pretty much the same great experience

The Elder Scrolls V: Skyrim on the Nintendo Switch is an instant purchase for players that want to relive the award winning Bethesda title on the go. But note that you will have to deal with some gameplay limits from the early 2010 era of gaming. For those of you that want a more upgraded version, then The Elder Scrolls V: Skyrim Special Edition is a must for the players who have never set foot in Skyrim, especially because of the unique adventure that you'll live. With graphical improvements and mods which can enhance your gaming experience, only limited by the creativity of the modders, the game will have you invest hundred of hours if not more. But If you've played the Xbox 360, PlayStation 3 or even PC version, the mods, DLCs and updated graphics might not be an enough reason to reinvest yourself in the game, especially since there's no way of transferring save files from previous console generations. 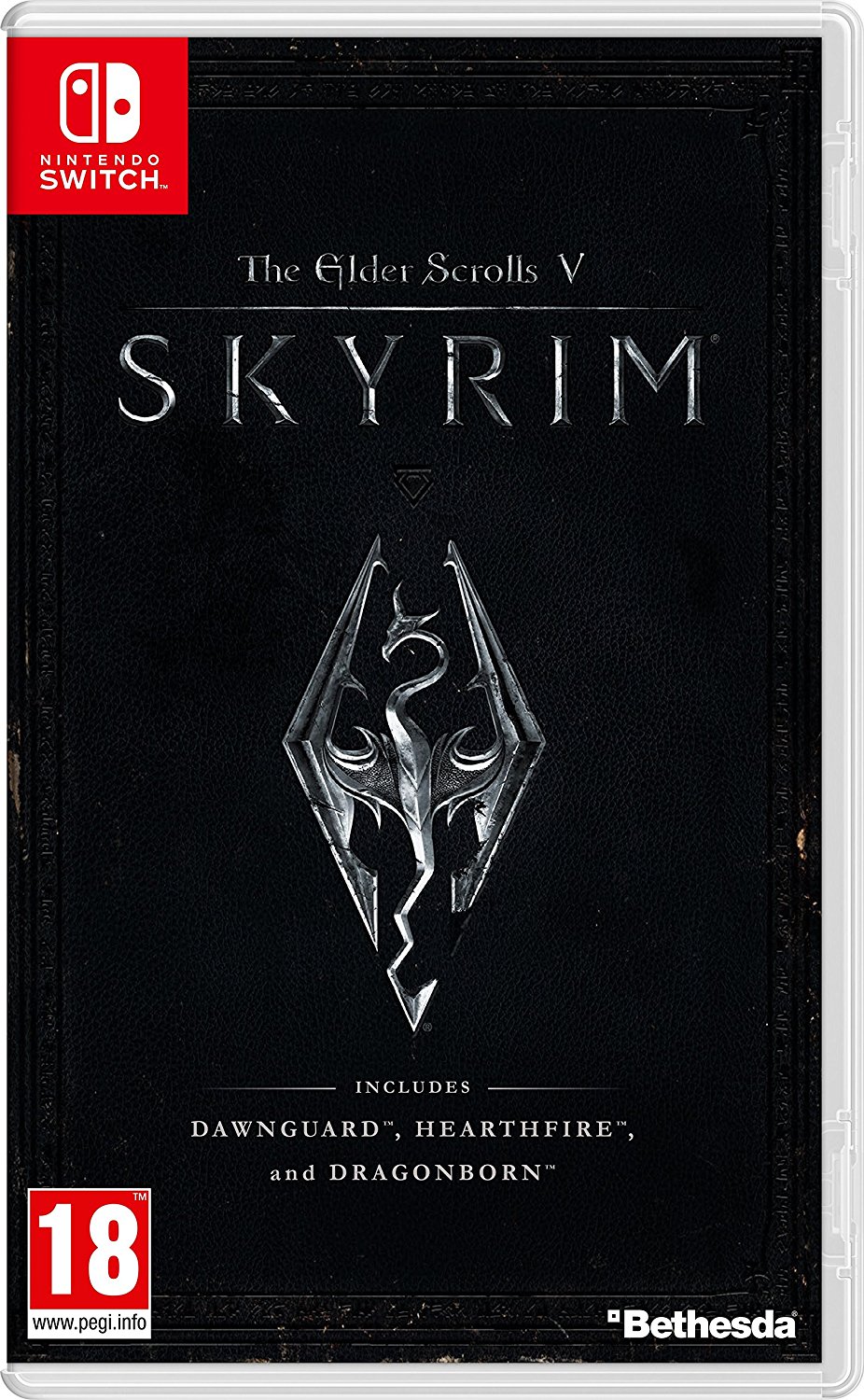