Back in 2014, a studio owned by Ubisoft was known as Ivory Tower launched quite an interesting take on driving games. An open-world racing game set in the United States, The Crew had innovative mechanics merged with MMO elements that worked over the years (you can click here to read my review of the original The Crew). While we reviewed the game and quite enjoyed it, the developers are back at it with The Crew 2, aiming to expand the experience to not just driving cars, but also planes, boats and finally motorcycles. So how is it? Let’s find out.

The original The Crew was set behind the story of Alex, and his mission to build… Well, a crew, to go inside the 5-10 motor club and avenge the death of his older brother. This time, The Crew 2 is not linked to any backstory, and your character will be built from scratch, unnamed, with a main goal to build his reputation as the best Crew driver in the country.

For that, you’ll have to drive like mad in this large open world set in different corners of the United States of America, to gain followers (or fans) and earn enough to participate in larger and more complicated events of what is known as the Live XTREM Series. The universe of The Crew 2, is therefore somehow realistic, with a bunch of fake brands, a TV show that follows the trials of numerous drivers and a race for the highest amount of followers, which should be appeal to all of you social media influencer wannabes (including myself). The whole is split with some scripted scenes supposed to highlight the affinities or rivalries of the different racing style’s characters, but in an atmosphere that sounds so much like a bad reality TV show (think modern Discovery Channel blended with trashy E!). I’ll be honest, after couple of these cutscenes, I just couldn’t handle, and skip most of them due to the cliché conversations and just a general lack of interest.

Nevertheless, the game isn’t bad for what it offers, and feels like an upgrade from the original The Crew. The car handling is much more responsive, even if it’s still a very arcade gameplay, yet still fun. You do not have to be a driving pro to win a street race, but there’s obviously some special cars that feel different and require a bit of learning like the crazy Supercars. On the other hand, motorcycles also have different feel depending on whether you are using a roadster or mountain bike, plus the planes and boats are a whole different ball game, but necessarily a good one.

You see, while I liked the idea of sea races, the boats lacks the thrill of speed, even while playing in cockpit mode, which doesn’t help considering maneuvering it is really simple. On the other hand, the aerial challenges with planes are more dynamic, with real sensations of vertigo, and a gameplay that relies on tricks which is complicated to master, but that’s not an issue.

You’ll eventually learn to drive all these vehicules thanks to four main categories of events, which are Street Racing, Pro Racing, Freestyle and Offroad. Once you get deeper into these categories, you’ll also discover the depth of challenges, which could rely on tricks, dragsters, street races, aerial acrobatics and eventually beat the categories’ leading figure. But once you get 3-4 same challenges in a row, you’ll start falling into the trap of repetition, but that’s pretty much the curse of all racing games.

When The Crew came out in 2014, my main reproach for the game was that it didn’t look visually like a next generation game. When it comes to The Crew 2, the tech is definitely upgraded but not on all front, which results with weird mixed experience. While admiring the countryside, you’ll really enjoy the lush colors, animated skies and close to perfect water of rivers and seas (still believe they are the best publisher when it comes to wave animations since Black Flags). But once you are zipping through races, you’ll discover how heavy the game runs on a console – even on the Xbox One X – with a pronounced motion blur, lots of clipping in 3D models of buildings, and some strange choices of physics. But at least, we finally got dynamic weather, which even if it has a small effect on the driving, makes the whole experience magical especially when you get to the extreme like snowing or thunderstorms.

Finally like the original, The Crew 2 is an open world MMO game, and while Ivory Tower has clearly not skimped on the content front, there’s the disappointing fact that the PvP mode is not live at the moment of writing this review. You’ll have to wait until December – according to the announcement from Ubisoft on post-launch content –  but that’s a bummer for those that are fans, as it’s without any doubt one of the best features of the franchise. Nevertheless, the developer is planning major content updates every three months, which will be free to all players, including new vehicles, and a hovercraft in September.

Otherwise, The Crew 2 is still repetitive like its predecessor, despite the diversity of the challenges. This is probably due to the completely banal scripted story, that does not encourage the player to advance in the game, and simply toss him in the void to drive and feel thrills of the race. It’s still a fun game for players who enjoy wandering in an open world, or fans of the original.

The Crew 2 was reviewed using an Xbox One digital download code of the game provided by Ubisoft Middle East. The game is also available on PlayStation 4 and PC via digital and retail store releases. We don’t discuss review scores with publishers or developers prior to the review being published (click here for more information about our review policy).

There's definitely good intention with this sequel, even if The Crew 2 is not the groundbreaking upgrade we expected from Ivory Tower. While the game is still solid in terms of mechanics and gameplay, some weaknesses might not appeal to newcomers, and fans of the original will be disappointed by the lack of PVP at launch. 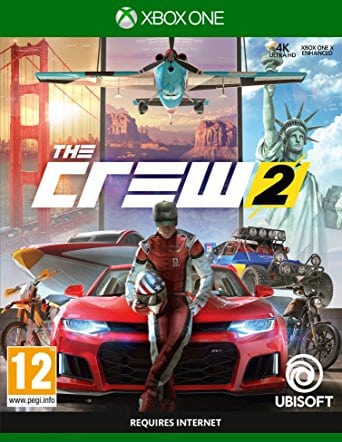