What can we say about Suda 51 that hasn’t been said already by the biggest critics in videogaming? He’s an auteur, he’s a pop-culture addict, he’s an expert at wowing and confusing, and he’s one of the biggest names to come out of Japanese game development. Suda51 is known for his unique and often esoteric titles, having crafted cult hits like Killer 7 and No More Heroes, as well as more accessible titles like Lollipop Chainsaw. Suda’s not just all sizzle and no steak, however; he has a deep and well-formed philosophy on game design, and while his stories can often be confusing, they will no doubt have a powerful impact on the player. Basically, you won’t know what happened, but you’ll definitely feel something if you give it a chance.

Much like other great names in Japan’s game scene, Suda has a number of titles that were developed for Japanese audiences that didn’t always make it out west. Usually, Japanese publishers will avoid the Western market if they have a game on their hands that they don’t feel will appeal to gamers outside Asia. In this instance, the game in question is The 25th Ward: The Silver Case, which is debuting in the West with shiny new visuals for the first time. As hard as it may be to believe, this is a game which a Japanese publisher looked at and said ‘yeah I don’t know if they’re going to be into this’. So from the get-go, this is probably something that will appeal much more to Suda51’s loyal fans. Having said that, I think a lot of people should do themselves a favor and become Suda51 fans. In any case, that’s enough background for now; let’s take a look at The 25th Ward: The Silver Case.

To begin with The 25th Ward: The Silver Case is a visual novel; it’s not as heavy on gameplay, and it focuses much more on developing its story. Much like genre classics like Sin City and Pulp Fiction, the game features three separate storylines which (slight spoiler alert) might be connected. Now from the get-go I need to warn you that, in order to avoid spoilers, this review really can’t give away much. It’s going to be more of an examination of how the game works and how it ties everything together.

The 25th Ward is actually a sequel to a previous Suda51 title simply known as The Silver Case. It takes place in a new part of Japan’s Kanto region, known as the 25th ward (like in the title!). The fact that The 25th Ward is a fresh new area helps establish one of the game’s major themes – the deceptive nature of beauty. While on the surface the region looks sleek and fresh, there’s something very sinister lurking underneath, and the game sees you pulling back the curtains to reveal it.

The title starts with the strange murder of a young woman in an apartment complex. The murder isn’t your run-of-the-mill killing; it almost seems like a suicide. The game’s first section deals with the murders and their true meaning. The second deals with a group of criminal types who maintain order through their underworld network, and also explore these mysterious crimes. The third shows the previous game’s protagonist, Tokio Murishima, as he tries to find the answers.

The causes of the murders are slowly revealed, and it turns out to be much bigger than anyone anticipated. While the story starts off as a sort of murder mystery, it goes into a lot of more complex and outlandish directions. I can’t really spoil much here, but I will say that the story does manage to connect things and keep you grounded; but you really, really need to stay focused and get a sense of where everything is going. A lot of the details won’t make sense, but you’ll get the overall concept. Like I said earlier, even if you don’t really put together what’s happening, it’s quite the ride.

The game is a visual novel for the most part, but there are some sections where you do take on challenges and try and solve puzzles. These are arguably the game’s weaker section. Suda51 knows how to craft a puzzle or two, but he can be obtuse at times, turning things into trial and error. In a game where this trial and error keeps you from the main attraction (the story), it’s not welcome. The game is, however, held together nicely by its dialogue. Just as obscure as ever, the conversations seem to be loaded with double entendre, hidden meanings, and Suda51’s trademark irreverent humor.

Aside from the narrative (which has its own ups and downs), I’d say my favorite part of the game was its unique visual style. It feels like something straight out of a Japanese art piece, but it’s not the typical manga aesthetic.

All in all, “Correctness,” “Placebo,” and “Matchmaker.”, the game’s three sections will leave you scratching your head, but they tell one of the most memorable stories I’ve played of late. I still have a ton of questions, but I can say that even if you don’t get all your answers, the game has a real sense of wonder.

The 25th Ward: The Silver Case was reviewed using a PlaySation 4 digital download code of the game provided by NIS America. The game is also available on PC via digital store release. We don’t discuss review scores with publishers or developers prior to the review being published (click here for more information about our review policy).

The 25th Ward: The Silver Case shows exactly why Japanese studios are so good at crafting visual novels; they’re not afraid to take risks and confuse the audience in the interest of telling a unique story. Suda51 may be more well-known for other titles, but this ranks among his classics, and it’s a must-play for fans of visual novels.

Mazen enjoys anything with over-the-top violence, dark humor and a real challenge. He's still pretty big on single-player games and he's always looking for new titles he might've missed out on, so if you know about a crazy new title that's flying under the radar, look him up!
More Goodness
AdventureFeaturedGrasshopper ManufactureMultiplatform 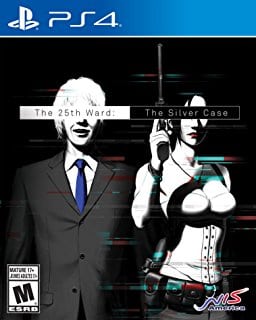