There are a handful of things that geeks on the internet love: computers with glowing leds and mechanical keyboards, silly memes, cats, and of course Nikola Tesla. Folks in geekland are also pretty into the legendary sci-fi author and master of the macabre H.P. Lovecraft, so when you see them together it’s a pretty fun moment as a geek. Thus we have Tesla vs Lovecraft is a shooting game developed and published by the Finnish studio 10tons.

Tesla vs Lovecraft is a top-down shooter, and the folks over at 10tons know a thing or two about the genre. Their classic Crimsonland released in June 2014 on Steam, which was a landmark in the genre of top-down mayhem. 10tons hasn’t just called it a day however, as they’ve put out a number of well-crafted indie shooters, one of the latest JYDGE, which we previously covered.

10tons definitely does shooting best, but this time around they’ve polished the storytelling and they’ve come up with a sufficiently ridiculous yet surprisingly creative way for Tesla and Lovecraft to meet. Obviously we know Tesla as a bigshot in the world of electricity, and that’s kind of the hook here. While showing off his latest gadget in the Big Apple, Tesla’s show, old man Lovecraft crashes the party and warns Tesla that he’s trifling with forces beyond his understanding. Sure enough, Tesla gets home and the place is overrun by weird monstrosities. I’d like to pause here and note that the intro cinematic renders both Tesla and Lovecraft expertly, and the game is overall very polished. Voice acting is also top notch this time around, and it really feels like 10tons is stepping it up in the aesthetic department.

Level design is terrific, and they really committed to the theme. It feels colorful and vibrant, and it was more reminiscent of AA hits like Torchlight than an indie title. Obviously I don’t wanna make it seem like 10tons was a rinky dink operation before this, but you can’t deny that this time around they really got the visuals down.

Of course, once the action starts, it’s their time to really shine, as this is where it gets run and gunny. Now whereas Jydge turned things more tactical, going for a big overarching level structure and rewarding stealth and precision, Tesla vs Lovecraft takes it back to the old school, bringing us the very chaotic Crimsonland -type structure, where you’re turned loose on hoards of monsters and expected to shoot your way out.

Now, while it’s similar to Crimsonland in that you take on tons of monsters that are advancing on you like an angry wall of death at a metal festival, you still have levels with obstacles and paths. This is important, as you’ll need to navigate the levels while also keeping yourself out of the reach of the enemies.

Right off the bat you get a teleportation backpack, and this makes things even more hectic. When you’re cornered, you can dash right out and get to a safe place. You only get three teleports before it needs to recharge, however (think Tracer), so you don’t wanna overdo it. The teleport mechanic is useful for when you wanna get behind a fence and block off monsters but still gun them down.
As I mentioned, 10tons really play to their strengths here, and the game creatively doles out powerups in a way that gives you much needed aid without ever making you overpowered. New weapons and abilities roll in, and as you level up, you get special perks. The game expects you to play dangerously of course, as most of your special attacks work best when you’re surrounded.

I’ve reviewed a ton of top-down shooters here, and I often point out that the best ones have a hook or a gimmick. In the case of Tesla Vs Lovecraft, there sorta isn’t one, but the selling point is really that it’s a really solid title by one of the biggest names in indie shooters. The game is brilliantly executed, and I loved how well it balanced its difficulty and presented a real, engaging challenge. Moreover, it’s for fans of the genre. Don’t like the difficulty? Just add in more monsters. Want tougher levels? They’ve got you. Tesla vs Lovecraft is fun for sci-fi nerds; it’s a must have for fans of top-down shooters.

Tesla vs Lovecraft was reviewed using a PC downloadable code of the game provided by 10tons. The review was tested on a PC running Windows 10, with an 8GB NVIDIA Geforce GTX 1070 fitted on a 4th Generation Intel i7 4790 3.6Ghz CPU and topped with 16GB of RAM. We don’t discuss review scores with publishers or developers prior to the review being published.

Tesla vs Lovecraft is another classic from top-down shooter pros 10tons and it’s a must-have for any fan of the genre. Its absurd premise makes for some great lovecraftian horror action, and its balanced gameplay makes it one of the best indie shooters this year. 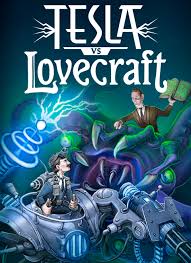