At first glance, Sonic All-Stars Team Racing Transformed may seem like it’s just a response to Mario Kart. But anyone who has played the classic kart racer can attest to the fact that Sega did a great job giving Sonic’s racing game it’s proper due. The title had its own identity and mechanics and was a ton of fun to play through. That’s why I was excited to see Team Sonic Racing. Personally, I would have been happy to play another kart racer on PS4. But it seems like the folks behind Team Sonic Racing had bigger plans.

The thing is, Team Sonic Racing isn’t just another Kart Racing game. It’s built around a set of co-op mechanics. Essentially, in Team Sonic Racing you participate in races as teams of three. The idea is that three players need to work together to advance in the race. This is a really good idea for a co-op game, and Team Sonic Racing does a great job with the implementation. For starters, there’s a really clever and intuitive drafting system whereby each racer leaves a trail behind that other racers can use to boost themselves. Moreover, you can pass powerups along to one another mid-race. Ultimately, your team’s progress is based on how well everyone did, which is measured by your point total at the end of the race. The game mode really encourages you to work together with your friends, and it adds a fun component to the game. The main issue is that it doesn’t seem to work *as* well with the AI players. AI players in the games I played seemed to be much tougher than my AI buddies, and it was definitely a tricky task to work with the bots against the other bots. But with human players, you definitely stand a fighting chance.

The game has made some other tweaks, but I’m not a huge fan of most of them. For starters, they’ve cut the roster down to characters from the Sonic universe (yeah, that’s a thing that exists). This makes no sense, as the Sega character roster was fun and varied, and showed off how surprisingly eclectic Sega has been as a publisher and developer. While the roster feels a bit smaller this time around, there’s still a pretty deep customization system that lets you adjust how racers play, and that adds a bit of variety. More importantly, racers are divided now based on speed and ‘power’, meaning you can select a racer to match your playstyle. But Team Sonic Racing definitely wants to do its own thing as a sequel. The ‘transformed’ part from Sonic and All-Stars Transformed is no longer in effect here. There are no longer air and water segments; races are just on land.

The tracks are pretty cool, however. Most tracks have 2-3 different routes with their own pros and cons, and I enjoyed replaying races to see how different tracks would work out. I especially enjoyed the tradeoff between shortcuts and more direct routes, as shortcuts featured much trickier driving, making for a very clever risk-reward system.

However, I feel like the game could have worked on making things clearer in the visual department. Firstly, the tracks open up to many routes, but it’s not always 100% clear when that happens, and you’ll run into a few accidents trying to figure out where to go. Secondly, the powerup system this time around is just…strange. There are a variety of powerups, but they all look kind of similar and you don’t know what they do right away. There are these little creatures that are in the game and the powerups seem to be different variations and colors of those creatures. So you need a few tries to work out which is the homing missile and which is the trap for people on your tail.

Finally, the game could use some tweaks in the technical department. When playing splitscreen I noticed the PS4 having a bit of a tricky time, and I could feel the FPS dropping a bit. This is a big no-no in a game that focuses so much on speed. Given how visually dynamic many of the tracks are, I feel this is a case of them trying to look flashy and prioritizing that over smooth performance. It does pay off in a sense; the tracks feel much bigger and grander than the ones in Sonic All-Stars, and they have a more grandiose sense of scale.

In terms of Kart Racing fun, I think I definitely enjoyed Team Sonic Racing because of how focused it was on delivering a solid challenge. Kart Racers are often seen as being titles aimed at a more casual market, and Team Sonic Racing shows that kart racers can still offer a ton of challenge and appeal to the more hardcore gamer.

In terms of the actual feel of the driving, I feel like Team Sonic Racing really nailed it. The cars feel fun to drive and have a real weight to them, so it’s arcade without being too cartoonish. I found myself playing for longer and longer stretches as I got a sense of the mechanics.

Team Sonic Racing was reviewed using a PlayStation 4 downloadable code of the game provided by SEGA. The game is also available on Xbox One, Nintendo Switch and PC. We don’t discuss review scores with publishers or developers prior to the review being published (click here for more information about our review policy).

Team Sonic Racing loses some of the things that made previous Sonic Racing titles great, but it adds in co-op gameplay mechanics that really push players to work together to cross the finish line. It’s a great addition to the kart racing genre, and it’s totally fun with friends. 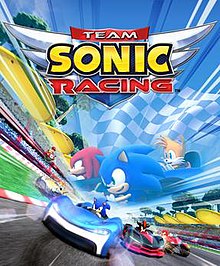