Review: Stick it to the Man

With the release of the Nintendo Switch we witnessed a quick rise in the Indie titles with some games more memorable than others. Zoink Games, gave us Stick It To The Man which in this case is much more than memorable. This Swedish developer is known mostly for being a great story teller which is something I personally look forward in indie games and they sure did not disappoint in this release.

Stick it to the Man puts you straight away in Ray’s skin. the main character of the story who has a rather bizarre job. He is used as the test subject for different type of helmets in order to measure their resiliency. This is where our story begins with Ray going back home to see his girlfriend Arlene where something out of space hits him in the head and changes his life forever. Dazed and confused, Ray can now hear people’s thoughts and has weird spaghetti pink looking hands popping out of his heads giving him an extra pair of hands.

Without revealing too much and spoiling the fun, it is important to mention that the special ability that Ray received is something extremely desired by a shadow called The Man. This will be the main focal point between our protagonist and the story where he we will embark in a journey across different settings, from Asylums to Space all while maintain a genius form of black humor which in many occasions made me laugh out loud in the middle of my living room.

Those pink arms are extremely helpful to Ray as they help him collect thoughts of all the characters throughout the ten episodes. To progress, you will need to acquire ideas and objects all by using the elasticity of the arms. These objects are easily identifiable on the screen as they will look like stickers which you are able to peel off. During your journey, you will need to collect and place those peeled stickers on specific areas to unlock the next step. Stick it to the Man is not for the players that do not like to read much as there is an intense amount of reading to do however the developers do allow you to rewind and fast forward dialogue which makes it easier on the eyes.

One thing that caught my attention is the lack of monotony in chapter progression. For example, in the asylum if you are not too careful, you might just end up persecuted by the nurse. There are also many secret phases for you to unlock. Not to mention certain platforms that could change the entire course of things by speeding up the whole game.

In terms of the Stick it to the Man’s aesthetics, the developers decided to use a weird paper feel for both levels and characters. The game design is very smart, and the entire progression works in your favor. You will be able to use several areas on the screen to take advantage of your enemies and sneak up on them behind them.

Stick it to the Man is not very difficult, the developers decided to bring back the nostalgic point and click adventures from old school puzzle games which could prove challenging when playing on the switch, however it is easily ignored by all the fun you will be having.

If I am to comment on one thing that I really like, it is the artistic side of Stick it to the Man. Every character has his own personality with hilarious back stories. Whether it is a gang member with shiny teeth or a fat man who loves cheese, there is always something funny going on in the background. The animations are simple but everything in this game works well together leaving no room for disappointment. With the mid 90’s as a reference of art, the 2D aspect of the game does not feel outdated, due to the touch of depth added during stage creation.

I was very impressed with the sound tracks used in Stick it to the Man. If I recall at one point, there was a Kenny Rogers track playing in one of the levels. As a matter a fact, the entire soundtrack has a touch of jazz to it. The game is a little bit short and does not allow much replay because of its linear style unless you are an achievement junkie. The latter could get a little frustrated with the inconsistency of available trophies. In certain levels you will have to collect 4 or 5 and others there are absolutely none. With 10 levels in total, it took me around 5 hours to finish the game.

Stick it to the Man was reviewed using a Nintendo Switch downloadable code provided by Zoink Games. The game was released earlier on PC, Xbox One, PlayStation 3, PlayStation 4 and Nintendo Wii U in digital and retail releases. We don’t discuss review scores with publishers or developers prior to the review being published.

Stick it to the Man is a game that attracts attention for its style, the black humor and the puzzles work well together to create this beautiful 2D world of paper and takes you in a spectacular journey. This game can be summed by 2 simple words, beautiful aesthetics. It is well developed with perfect humor. I enjoyed solving the puzzles however I would have liked to see a little bit more stage interaction. 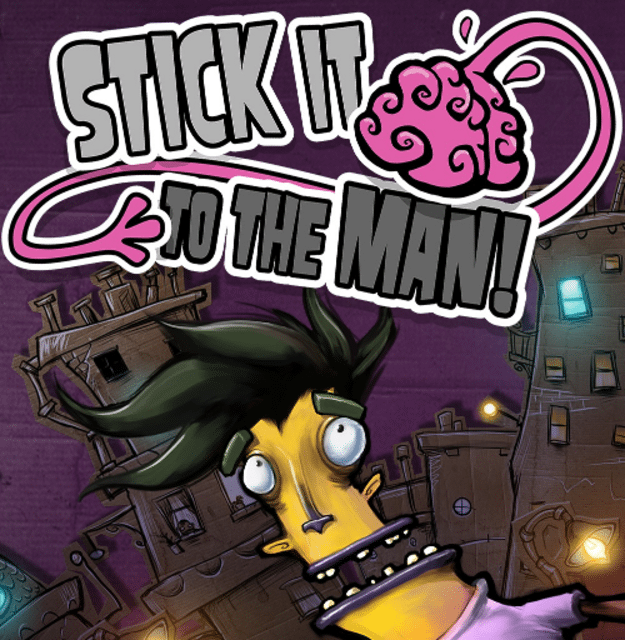