I have had Ubisoft’s Starlink: Battle for Atlas for about 2 weeks but did not want to release this review until I managed to get my hand on those juicy toys to get the full experience. I am glad that I waited as the experience is much more enhanced when you play the game with the toys. I must admit, I was a little bit worried about the success of this title given the fact that gaming and toys did not really work in the past. We have seen the likes of Skylanders, although it had its moment, it never really reached the peak everyone was hoping for.

For the sake of this review, I will discuss the game as a whole. Purchasing the title along with the toys. Starlink: Battle for Atlas offers a gameplay that revolves around your spaceship. This Combat Ship is at the heart of the game, mechanics and interaction with the toys. You will need however a set of things to be able to start your journey. The toys, weapons, pilots and the Starlink adapter that connects to your PlayStation 4. Whatever you mount on the PS4 controller is what you will get on the screen. Whatever choice you do needs to always have one of each of these categories, and there is a lot of things to talk about here so let us start with describing each of those.

Pilots are your heroes in Starlink: Battle for Atlas. There are 9 different pilots to choose from. Each pilot has an ability that fits into whatever playstyle you choose to pursue. The ships, as mentioned before is the core of your gameplay. Each ship has a certain base statistic, but it does not really matter because once you start to assemble different pieces to your ship you can always achieve a well-balanced fighting machine. The game offers you 5 different type of ships.

The accessories are the wings and weapons you can add on to your ship. The wings add attributes to the overall ship stats while the weapons are your source to defeat the enemy. There is a variety of weaponry to choose from such as rocket launchers, shotguns, beams, missiles, …etc. Overall there are 15 different type of weapons.

And finally, the ammunition that is used for your weapons. These are divided into Fire, Ice, Gravity, Stasis and Kinetics. There is a reason for having such a variety of ammunition. Each enemy you face in the world of Atlas is weak to a certain element. In some areas, you will find that the mixture of Ice & Fire is deadly to your foe but might power up other types of monsters.

Before moving forward, I must mention that playing Starlink: Battle for Atlas without purchasing the toys is also possible. So, do not worry if you are missing an accessory. The game will always give you options or other means for completing your journey. I mentioned the toys a lot in this review and I must admit that the transition between the changes of armament, ships or pilots is extremely easy and responsive. It kept me entertained throughout the entire journey.

Now that we are done with the technicalities, we can jump right in. Starlink: Battle for Atlas puts you in the hands of a squad pilot called Starlink who’s objective is to investigate Atlas, a new world in which they seek to know more about the Nova, an element capable of overcoming the speed of light and to fuel our mastership called Equinox.

Our leader, ST Grand, a brilliant scientist found a way to refine the Nova and that got the attention of the Legion. During the tutorial, we quickly learn that the Legion, a robotic army created by the creators who are called guardians are being controlled by an unknown enemy hell-bent on taking over the world. After ST Grand gets kidnapped, our mission will be to travel around the Atlas to look for allies so that we can turn the tides and have a chance of winning this war.

Without going into many details and spoiling the adventure, each planet will offer you a set of things to do. Help the inhabitants make friends and kill enemies. Before you can do that, you will obviously need to start discovering that planet and analyze it. Once the inhabitants start trusting you, they will start giving you missions in exchange of items and Electrum. Electrum is the game’s main currency. Eventually, you will start unlocking workshops, refineries, and other building that will help you upgrade your ship, weaponry and pilot’s abilities.

As you might have guessed, each planet also has a Legion force trying to invade it. Those foes will need to be dealt with in order to change the balance and increase your influence with the inhabitants of the planet. Starlink: Battle for Atlas tends to get a little bit repetitive in terms of the objectives and some people might argue that apart from exploring the 7 planets there is not much to do other are content with the content. This is something that comes back to you as a gamer: is 80 hours of free exploration enough or are you the achievement junky who wants to do everything, explore every inch? Regardless of who you are, Starlink: Battle for Atlas is worth playing. I found myself skipping the main campaign on several occasions just to go on a Star Trek discovery frenzy. But no matter how much you deviate, you will always find yourself drawn back eventually.

If something stands out in Starlink: Battle for Atlas, it must be the graphics. The planets are clearly differentiated from each other, each with a very particular atmosphere. They each have an ecosystem with several elements defining your experience. The fauna stands out and the flora is extremely colourful. It is a shame that we can’t interact with these elements. The game follows a normal night and day cycle giving us a different aspect of how the planet interacts during the different time of the day.

Space, on the other hand, is a transitional area and relatively empty. While travelling in space you can see the planets and their uniqueness. Unlike the Legions who are mostly on the planets, space has a completely different enemy. The outlaws, who are waiting at every corner ready to ambush us. Outlaws are a bunch of mercenaries who believe in nothing and like to scavenge things. Once you defeat them, you have access to their ship’s treasures. Combat in space is also interesting as it adds a much bigger dynamic that combat on land. The mechanics, manoeuvring, and sounds are extremely well recreated in Starlink: Battle for Atlas.

Having said that, it is worth mentioning how the combats differentiate between land and space. The control of the ship can be divided into two different sections: On the one hand, while exploring the planets, we can fly at ground level, being able to jump and accelerate to move around the environment. In turn, with the rear triggers, we fire the two weapons that we have equipped, each with its ammunition bar that will automatically recharge if we spend it or stop firing. To aim, we use the central grid as if it were a third-person shooter.

While we fight, we can perform spinning and tumbling to avoid enemy projectiles while we deploy a shield to block attacks, always keeping an eye on our “stamina ” bar to avoid being sold in the middle of a fray. If we notice that our weapons are not doing the right damage to our enemies, we can remove the weapon we want at any moment and exchange it for another, unlocking new elemental combos and doing a different damage to finish off the rivals.

On the other hand, if what we prefer is to explore and study our environment, we have a scanner in the ship to analyze the local fauna and an extractor magnet to collect the minerals, the organic samples of the planet or the remains of the enemies that have some value to sell them in allied buildings. At any moment, we can activate the flight engines of our ship to sail the skies of the planets. Once here, we can activate the Hyperdrive to direct us towards a new destination. The planets are quite far from each other, and although when we first visit a planet we unlock a Quick Trip to it, going to an unknown planet is a bit tedious, since every few meters we will be ambushed by the Outlaws and by the Legion.

Battles in space change slightly having no ground under our engines, so we can make spinning tops and somersaults to change direction while harass our enemies, being more difficult and cumbersome to aim our guns, which does not detract in terms Immersion is concerned.

Apart from the personalization that collectible toys offer us, in Starlink: Battle for Atlas, we will acquire different improvements that will allow us to modify the attributes of both our ship and each weapon that we have so that we can better adapt the use we give to each element of our vehicle. We can also buy upgrades for the Equinox, which will influence all Starlink pilots, such as increasing our damage to various Legion structures or increasing the maximum capacity of elements we can collect from the planets before going to download to an Allied Base.

Both the ships and the pilots have a system of levels and experience, which we will acquire when completing missions and bringing down enemies, so that we can always know if the enemies in front of us are at our level or if it is better to focus on a planet with a lower level to strengthen us. On the other hand, when levelling up we can improve the final skill of our pilot by increasing their statistics.

Starlink Battle for Atlas was reviewed using a PlayStation 4 digital download code of the game provided by Ubisoft. The game is also available on Xbox One and Nintendo Switch via digital store releases. We don’t discuss review scores with publishers or developers prior to the review being published (click here for more information about our review policy).

• The story could have been better developed
• Planets are fun but lack of interaction with the environment
• There is no emotional connection to the pilots.

Starlink: Battle for Atlas offers a courageous new experience for gamers. The usage of toys is exceptionally well done but we are not sure if it is for everyone. They are also unnecessary as they don't really give you an extra edge since the game is complete as is and tons of fun to play. Ubisoft nevertheless learned from the mistakes of No Man Sky and managed to give us everything we wanted to see in space exploration with a twist. We would personally like to see more content coming out soon along with more intractability with planets. Overall, we highly recommend this game if you are into space exploration games.

Spawn of the gaming revolution, Luciano Rahal has spent the last 12 years working as an advertiser for top multinationals such as Coca-Cola, PepsiCo, Apple and many more. By night he returns to the dark side as a full time gamer. Now he finally married his passion and expertise by managing a Middle East eSports club called Nasr eSports.
More Goodness
AdventureFeaturedInteractive ToysLocal and Online Multiplayer 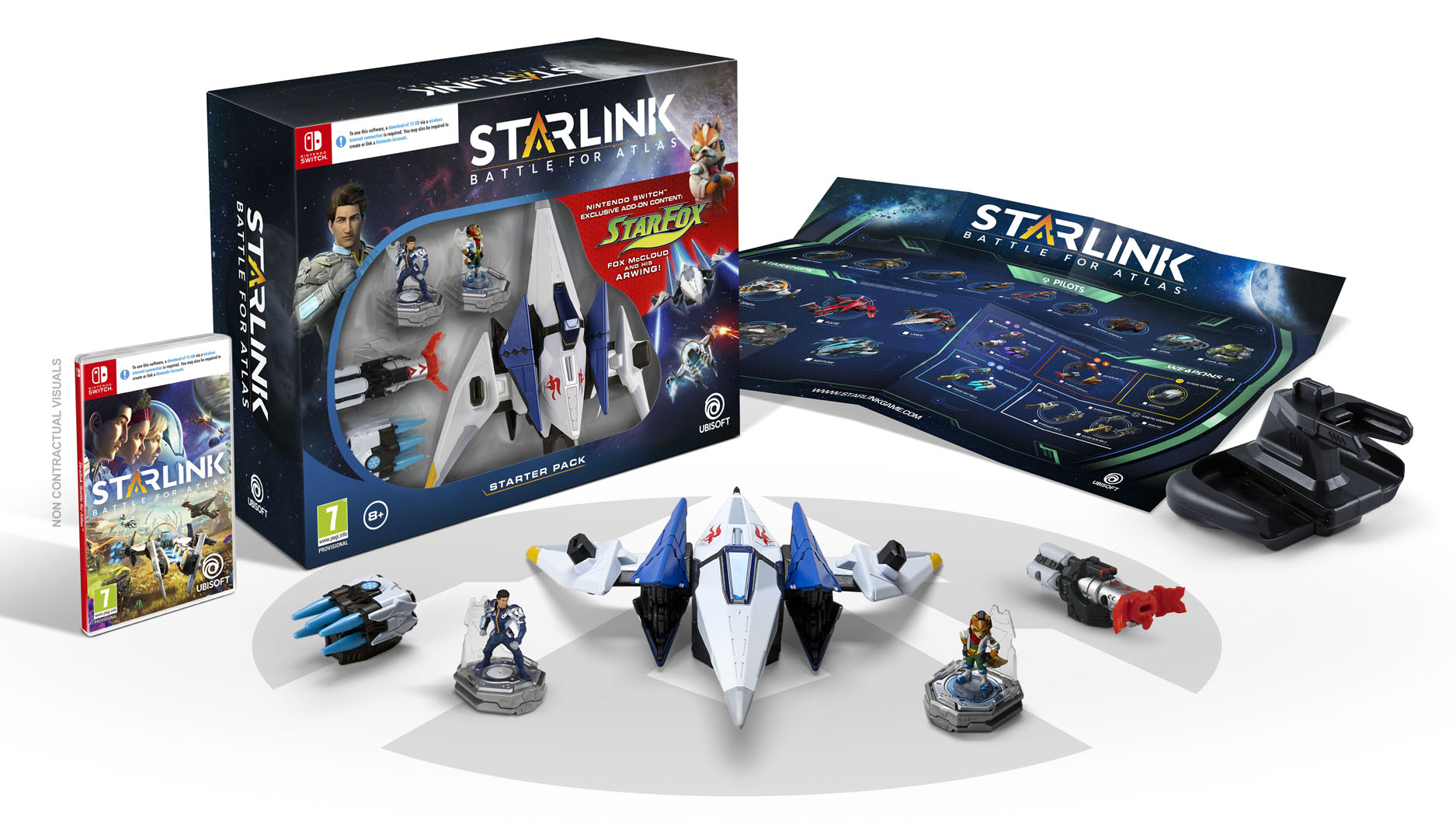