After two decent experience with VR (Eagle Flight and Werewolves Within both reviewed back in January), Ubisoft is back at it with an adventure set in the Star Trek universe on PlayStation VR, Oculus Rift and HTC Vive. A simple concept to put you on the deck of the USS Aegis, with Star Trek: Bridge Crew reviewed on PlayStation VR.

What strikes first is the quality of Star Trek: Bridge Crew. I feel that there’s been a lot of work on the finishing touches, the complete tutorials complete, a well-made ergonomic menu, and of course an immersive mood with great visuals and sound effects. You start your first step in the game by creating your avatar, and head to the academy where you are taught how to manage a ship. The bridge consists of 4 main posts: the Captain, Engineer, Helm or Tactical seat. Each one has access to specific functions to manage the ship, accessible via a touch panel. Once the training at the academy is complete, you head to the briefing room to choose the missions of your choice, and I should note that this game is mainly designed to be played with 4 real person in coop.

For this, a microphone is mandatory, and while Star Trek: Bridge Crew’s matchmaking is rather well thought out because it is possible to join a random game at any time, creating a private party with your friends is the optimal choice, but that doesn’t mean you can’t play alone with AI-powered characters (which I don’t recommend honestly). To be honest, when I started the game, I had no real expectations of Star Trek: Bridge Crew, but my first couple of minutes on the bridge were really enjoyable, to a point that you almost believe you’re on the USS Aegis! You listen, analyze and plan on the spot as if you would in “real-life”, giving orders or executing them depending on your role.

The captain has the general view of the situation and is the only one who can have an overall external view of the ship. The helmsman steers the ship and is responsible for defining the headings during space-time jumps. The engineer is in charge of managing power distribution and repairs, and finally the Tactical officer manages weapons and targets.

The singleplayer missions are not as limited as one might think, because a system of order has been put in place. It allows to give general orders where each station will act accordingly, or to give specific orders to each NPC, allowing parallel tasks to be performed at the same time. For example, the helmsman can prepare for a hyperspace jump while a tactical officer teleports survivors a certain outpost. That is if the AI ​​understands your order clear, but according to Ubisoft, an extra update in summer will bring an experimental version of the IBM Watson interactive speech and cognitive system, so that players can use their natural-language or accent to do all this, instead of attempting to mimic a sort of set speech pattern and voice tonalities.

As you’d guess, the goal of Star Trek: Bridge Crew is to manage the USS Aegis in order to carry out missions entrusted to you by the Starfleet. From rescue of ships lost in space, to an expedition to our Klingon friends, the missions are rather well scripted even for a non-Star Trek fan. If at first it’s pretty easy and repetitive, things get more delicate when progressing throughout the game, where orders given to crew members need to be precise and fast… Is there enough energy left in our ship’s phaser to continue a fight? Or do we begin to program the jump out of the area by prioritizing our energy to the shields? The choices are not necessarily obvious and the situation will depend on the ability of each person to manage his position.

But not everything is perfect though. The first concerns is that the graphics engine, although optimized for VR, doesn’t guarantee fluidity in general. The second flaw, one that I really can’t get over with is the actual position of your virtual hands in the game, and the way they move as if they are hit with arthritis. It’s not just aesthetic because sometimes to press some buttons on your controls, the location is sometimes unclear, and can really annoy in situation that require fast responses and reflex.

Star Trek: Bridge Crew was reviewed using a PlayStation 4 downloadable code of the game provided by Ubisoft Middle East. The game is only playable on PlayStation 4 with the PlayStation VR, and on PC with Oculus Rift and HTC Vive. We don’t discuss review scores with publishers or developers prior to the review being published.

While Star Trek: Bridge Crew might lose players along the way because of its particular gameplay and lore, the game has the merit of being original compared to other VR experiences on the market. The immersion is decent thanks to the use of the PlayStation Move and PlayStation VR, but it still requires you to play in co-operative multiplayer to fully live the experience instead of relying on AI bots. 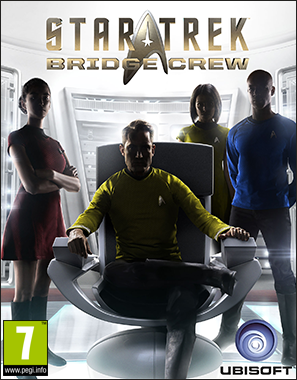