Nintendo Switch has been in our living rooms and in our hearts for some time now, and its library has grown as much as our love for it has. However, while the Switch certainly has a slew of new indie and AAA titles, I still feel like there’s not enough content  that works with the Switch’s setup, i.e. a console that works at home and on the go. Switch benefits from light, arcade titles that allow you to just jump in

That’s where Space Dave! comes in. It’s a sequel of sorts to a clever little indie called Woah Dave!, and it’s got a pretty nifty concept. Essentially, it’s an arcade shooter that’s very reminiscent of classics like Space Invaders. Long story short, your movement is fixed in 2D but with a modern twist. You only move left and right and shoot upward, but you also get to jump. You’ll need to jump around like a good little acrobat because enemies fill the ground with lava, which you need to dodge. Things get pretty chaotic pretty quickly, and jumping, dodging, and using power-ups becomes necessary.

While the game has three difficulty settings (starting with the aptly named Easy Peasy), it’s in no way mucking about. The game will test your patience and possibly even your humanity. You wanna try and grab hold of as many powerups as you can, as you can get little bonus drones and spreadshot, but the best is probably the ‘Space’ powerup, which lets you convert enemies to your side. However, the pick-ups throughout the game do alot to level the playing field. It’s arcade 101: one-hit kill all around, look alive, and hold on for dear life. I was jumping in and out of fire and blistering up my fingers before long, and I was mashing away at the buttons like it was the end times

All told, it’s a pretty simple game, albeit one that’s cleverly put together and well-executed, especially in terms of its colors, and look and feel. And like many arcade revival titles, it’s surprisingly polished in terms of movement, so you’ll get lots of responsive action out of your joycon. As I mentioned at the beginning of the review, the game is really ideal for those pick up and play sessions when you’ve got your switch on your lap and you want something a little lighter than a mute blond dude’s quest to destroy a giant glowing monster or Mario’s quest to find the impossibly numerous moons.

The game has a handful of modes and playable characters, but at its core it’s just a simple little arcade shooter, so pick this up if you want something in between games

Space Dave was reviewed using a Nintendo Switch downloadable code of the game provided by Choice Provisions. We don’t discuss review scores with publishers or developers prior to the review being published.

• Somewhat repetitive in some levels
• Difficulty can spike unexpectedly

Space Dave! is a great little action title that lets you jump in for some quick and chaotic Space Invaders-esque mayhem. It might not have much depth beyond its running and gunning, but it definitely has a ton of fun in a byte-sized package.

Review: Bleed 2
Be the first to comment!
Leave a reply » 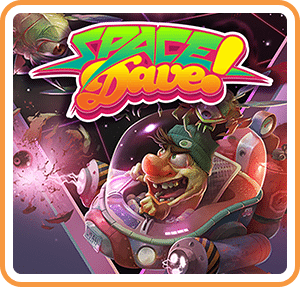