Editor’s Note: Months after the game’s original release and our review on PC, this piece has been updated following the release of the game on Nintendo Switch, as well as the content updates that are available to all which reflects on the overall score, and final verdict.

Ever since it’s announcement, there’s a clear notion that Ubisoft loves the Nintendo Switch. And after the console’s exclusive and excellent Mario + Rabbids Kingdom Battle which we reviewed last summer, the publisher is back with the port of one crazy role-playing game that we quite enjoyed: South Park: The Fractured But Whole. Is the title worth getting on the Nintendo Switch though?

Considering that South Park: The Fractured But Whole has a basic simplistic graphics and artistic direction, based on the animated work of Trey Parker and Matt Stone, it’s still quite a pretty game to look at. While it’s not really a groundbreaking technical feat in general, South Park: The Fractured But Whole is neatly ported to the Nintendo hybrid console, with clean textures, no framerate drops whatsoever, but a tiny hint of aliasing and loading screen can be long… But that’s something that was already present in the other platforms as well.

While playing the game in handheld mode, the aliasing is nonexistent though, and honestly, it’s a real pleasure to play South Park: The Fractured But Whole on the go, continuing this humor-filled RPG wherever you want. However, the image quality seems to have a very faint grainy effect, but after a few hours of play, you’ll quickly forget it was even there. On the dock mode, the game runs ok as well, but there’s some slight stutter in the background animations when you are moving your character, and I’ve had issues with text as the font seems too small for TVs. Gameplay wise, the switch to a Joy-Con setup seems to make perfect sense, as it’s a complete mirror of the console versions, on top of the fact that the touchscreen is usable in the menu. It’s a nice, but I’m a bit traditional in the sense that the use of the controller or even directional arrows is much more instinctive.

Completing the history of South Park by stopping to do all the secondary assignments has taken me around 20 hours on my first Xbox One playthrough, and there are no boring moments. If you haven’t played the game it’s a perfect opportunity to grab this, and I recommend picking up the Gold Edition of the game, which includes the Season Pass. For an extra 30$, the extra content really extends the lifespan of the game, especially the story mission packs, known as Danger Deck and From Dusk Till Casa Bonita, but take in consideration that you’ll need enough space on your SD card. South Park: The Fractured But Whole is a hefty 17.3GB with the latest update, so make sure you got enough space to download the game.

South Park: The Fractured But Whole original review published on the 16th of October 2017 by and Mazen Abdallah

Licensed games have always been regarded with suspicion by the gaming community. While there have been great moments in the annals of promotional games (Capcom’s partnership with Disney comes to mind), licensed titles are more often than not rushed, repetitive titles that exist mostly to cash in on a new movie, book, or show. However, there’s a second kind of licensed game: the kind that isn’t made in conjunction with the release of a new movie or show, but rather as a standalone entry in a particular world of geekdom. This is where you get your Knights of the Old Republics, your Arkham Asylums, and of course your South Parks.

Trey Parker and Matt Stone have always loved lampooning various aspects of media, pop culture, and politics, so it was no surprise when they took on a derivative, cheaply made mobile games in the hilarious ‘Freemium isn’t Free’. Trey and Matt know and love games, and so it was obvious that when the time came for them to put out a proper South Park game, they stepped up with South Park: The Stick of Truth.

Stick of Truth represented the ideal fan game: Something that draws on the lore of the series while also translating that lore into engaging, creative gameplay. In the case of Stick of Truth, they turned South Park into a classic-style cRPG, courtesy of Obsidian games. This time around, they’ve teamed up with Ubisoft San Francisco to create yet another fully-fledged South Park adventure called South Park: The Fractured But Whole.

Let’s start with the differences. While South Park: Stick of Truth was a parody of classical fantasy, South Park: The Fractured But Whole (haha get it?) is a parody of superhero comics and movies. Now when I say parody, I don’t mean a trashy, cheap YouTube style parody. I mean a love letter to a genre that also involves lots and lots of fart jokes. Speaking of genre, South Park: The Fractured But Whole starts with a bit of a bait and switch. The first level is still in the fantasy setting, but then Cartman arrives as his legendary superhero alter-ego The Coon to shock everyone by telling them that there’s a crisis afoot (a missing cat, because of course, it’s a missing cat), and Coon and Friends are the ones to solve it. Of course, that initial call to action branches out into a Civil War-esque struggle that parodies Marvel movies, the current US administration, and of course the American media.

A lot of the South Park: The Fractured But Whole’s humor comes from these moments where the characters acknowledge that they are a group of kids playing make-believe. It’s always been a steady source of humor for the show, and it brings perhaps the most shocking aspect of South Park into focus: these foul-mouthed adventurers are still essentially children. Much like Stick of Truth, the game is brimming with classic South Park gags, not to mention easter eggs. And more importantly, it ties into the mechanics. For example, if you try to cheat or use a walkthrough, a version of Cartman appears whose face resembles that of Patriots coach Bill Belichick, and you are told to stop acting like Tom Brady. Characters frequently commentate on battles and exchange barbs, and (in keeping the running joke that they are, in fact, children) call each other out for breaking the rules.

Of course, there’s also a ton of the trademark South Park controversy. To begin with, your difficulty slider is in fact based on whatever race you choose. This was pretty well-publicized before release, so for the benefit of this review, I’d also like to add that this ‘difficulty’ mainly affects how character interactions go and how much money you receive. Of course, while it seems like a typical South Park joke, you really have to marvel at the commitment they had to this scathing critique of modern American society. There’s plenty of biting satire layered into South Park: The Fractured But Whole, so fans of socially conscious comedy will be in for a treat.

Of course, fans of jokes about bodily functions will also be thrilled to note that South Park: The Fractured But Whole is loaded to the brim with fart gags and raunchy toilet humor. And of course, once again, the humor is very much tied into the gameplay. While in some instances passing gas is just something you do to annoy other characters (and get a laugh), passing gas is the cornerstone of some of the game’s most devastating attacks. It’s all about the chemical warfare.

Speaking of combat, Fractured But Whole isn’t all that different from Stick of Truth, but some much-needed tweaks have been made. Let’s take a step back and examine the RPG elements in South Park: The Fractured But Whole. To begin with, you get three basic classes to choose from: Brutalist, Blaster, Speedster. Other options open up, but those are your starting three. Of course, your character gets a backstory (since like to keep it clean here at VGP I won’t mention mine) and a cool design, and then you launch into it. Combat is turn-based, and you select an attack then target it. There are different attack radiuses, and in some instances, your enemies might rev up a heavy hit as you wrap up your turn, so it’s in your interest to ditch your turn and save your hide. The attack menu is pretty diverse, and you can use certain attacks to give enemies knockback damage, as well as help your teammates out.

But South Park: The Fractured But Whole’s combat system is really just the – for lack of a better word – game aspect of it. Where South Park really shines is the exploration. They knew that South Park fans would poke and prod every last thing, talk to every NPC, and fart loudly in front of every passerby to get a reaction. And there is a ton of South Park content in here, more than enough to keep fans happy.

South Park: The Fractured But Whole was reviewed using a PC and Nintendo Switch downloadable code of the full game provided by Ubisoft. South Park: The Fractured But Whole was tested on a PC running Windows 10, with an 8GB NVIDIA Geforce GTX 1070 fitted on a 4th Generation Intel i7 4790 3.6Ghz CPU and topped with 16GB of RAM. The game is also available on Xbox One and PlayStation 4 via digital and retail store releases.  We don’t discuss review scores with publishers or developers prior to the review being published (click here for more information about our review policy).

• Tons of South Park humor
• Hilarious and creative story
• Good amount of side quests
• The updated combat system.
• Lots of Easter Eggs
• Great to play on the go on the Nintendo Switch

Now available on the Nintendo Switch, South Park: The Fractured But Whole is a must-have for any fan of the series, building on the concept of Stick of Truth and provides an RPG experience that will please even the pickiest of South Park addict. It’s a licensed game that truly understands the source material and brings it into the game world. While the underlying RPG mechanics are solid, this is still something that will probably appeal to folks with Cartman t-shirts more than other gamers, so if you don’t like the show’s crude yet incisive humor, this may not be for you. But if you hum ‘Whamola’ in your idle moments, this is a must-have. 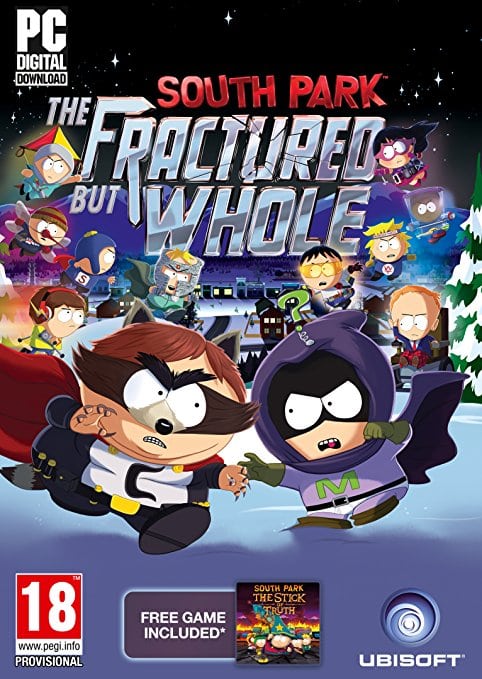