After an old-fashioned and more traditional released Sonic Mania created by Christian Whitehead (which is amazing by the way), it’s now the turn of the Sonic Team to prove that the Hedgehog is still kicking after all these years. A game very similar to Sonic Generations, you’ll have to help out Sonic defeat Dr Eggman in his quest to rule the world.

It’s been almost 30 years since the first Sonic game came out, and his eternal fight to ruin infamous Dr. Eggman plans for world domination. The latter, surrounded by his robotic henchmen and some emblematic villains of the saga, is now actually close to conquer the world, and while Green Hill is buried under the sand, our blue hedgehog is defeated, and it will be up to you the player, to lend a hand to the resistance and rescue Sonic.

Wait? What do I mean by the player? Well, Sonic Forces is a game where the player create his very own avatar thanks to a rather simple editor, and play the entire adventure as a member of the resistance. The editor is quite fun, making it possible for you to create all sorts of weird animal themed avatars, with a multitude of editable criteria like the sex, the color of the coat,the style of the clothes, and much more.

Anyway, your Avatar will be following orders from Knuckles, who will request of you to reconquer corrupted zones and to beat the bosses who oppose your progression. In the way the adventure develops throughout the game, Sonic Forces is very linear, content to drop levels after level on us.

The avatar created by the player and the modern Sonic share several gameplay mechanics. You can lock into enemies to eliminate them by automatically ram into them, slide through them, and obviously have superpower speed. As you progress through the game, you’ll realize that most levels transition between two style, which change gameplay mechanics because of mainly their camera angles: either you’re playing in a side-scrolling levels (similar to traditional Sonic games) or with a sort of over the shoulder 3rd person action platformers (like Sonic Colors).

The major difference now between Sonic and your Avatar is that since you’re a “normal” citizen of this world, you will be given a Wispon. The latter is a weapon that can harness the power of the Wisps, and range from being a flamethrower, lighting whip or even a void powered black hole gun. Which comes to my first issue with this Sonic game: Why seek to eliminate enemies by jumping on them when it is possible to burn them away with a flamethrower? The equipped Wispon also determines the secondary power that is activated when the character picks up a bonus of the same color. For example, if the flamethrower is equipped and a red bonus is collected, then the avatar can fly for a few seconds in the air as the explosions. Needless to say, it is essential to arm yourself with the right tool according to the level needs, in hope to beat the best times.

When it comes to the actual storyline of Sonic Forces (and most Sonic games), there is always a good excuse to play around with the universe, the music or even characters (which in this case is your very own). Sure expect a totally wacky story and a bunch of dialogues and conversations between characters that are cheesy, but I got to give it to the team for the diversity in settings even if it lacks readability in some instances. There are seven universes in total which are Green Hill, Chemical Plant, City, Death Egg, Mystic Jungle, Metropolis, Eggman Empire Fortress; which you’ll visit in roughly 5 hours split into 30 levels. Once the main story is over, it is always possible to replay levels or try to beat additional challenges to unlock various customization objects for your avatar.

So what about the technical front of the game? Tested on Nintendo Switch, the game is locked at 720p and 30 frames per second, with textures that are reduced to lower the load on the machine, but it is still very decent and fluid overall. The PlayStation 4 and Xbox One version of Sonic Forces on the other hand goes to the expected 1080p and 60 frames per second, and those lucky enough to have grabbed an Xbox One X will be happy to know that the game runs at native 4K.

Sonic Forces was reviewed using a Nintendo Switch physical copy of the game provided by Sega. The game is also available on PlayStation 4, Xbox One and PC via digital and retail releases. We don’t discuss review scores with publishers or developers prior to the review being published.

Sonic Forces is not a terrible game, but it ain't a good one. Full of cheesy dialogues, a storyline that doesn't make any sense, and weird additional gameplay mechanics, I feel that the Sonic Team's urge to create something fresh and new to the franchise is actually pushing them to overdo it. If only they would listen to their fans and stick to a traditional side scrolling platformer like this year's release of Sonic Mania.

An accomplished, award-winning gaming professional with more than 12 years of experience in the videogame industry, Nazih Fares has worked in public relations, marketing, eSports and localization for over 14 different publishers and more than 90 global brands. Fares is currently MENA Communications Manager at Blizzard Entertainment, based in The Hague. His views on this site are his own, and not those of his employer.
More Goodness
FeaturedMultiplatformPlatformerSEGA 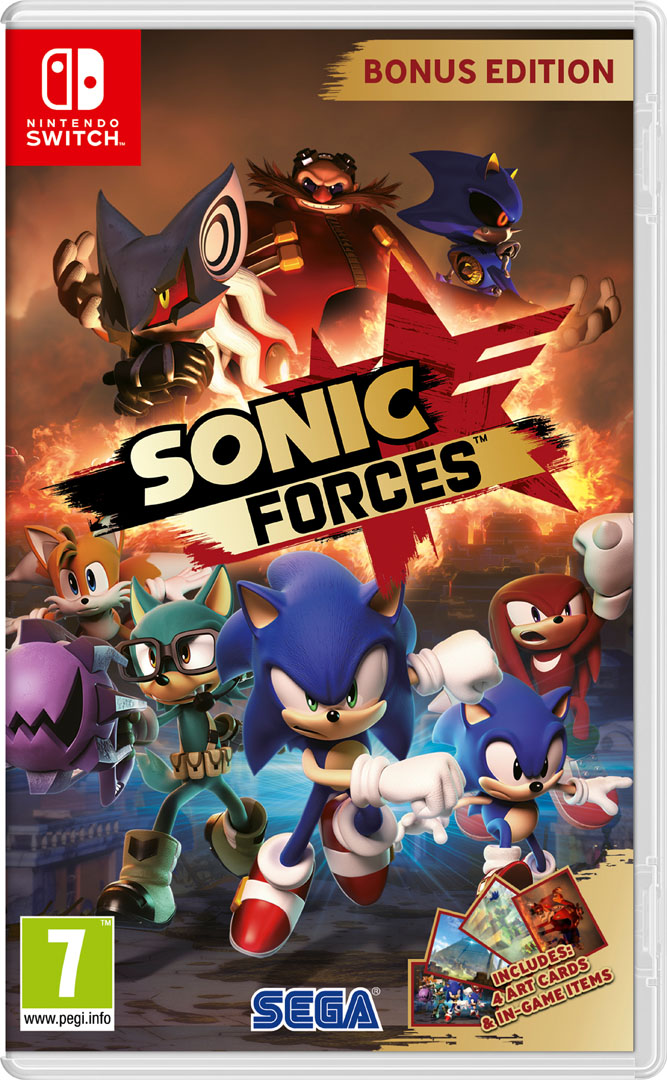