While most SNK fans are waiting for the potential King of Fighters XV, the developers figured it would be fun to play around with the iconic female fighters of the franchise and a different gameplay, in hope to spice thing up with SNK Heroines: Tag Team Frenzy. While it looks like a simple game mainly for fans, there are some core ideas that make a big difference, but is it worth it?

The “story” of SNK Heroines: Tag Team Frenzy starts right after the event of the King of Fighters XIV tournament. Kukri, one of the King of Fighters newest characters created a parallel dimension to lock up several of the female tournament fighters, pitting them against each other. To escape, they will have to team up in pairs and kind of fight by Kukri’s rules. Extremely simplistic and brutally sexist (i’ll explain why later on), SNK Heroines: Tag Team Frenzy’s story mode will only have us chain one match after the other until eventually reaching the final fight and discovering the true motive of Kukri. The latter wants to expand his parallel dimension into the real world, and turn all defeated fighters into sand statues for his private collection.

As the name suggests, SNK Heroines: Tag Team Frenzy will ask you to fight in duos, with one being the main attacker, and other considered like a supporting one. There are 14 fighters to pick, which not only are just female but overly sexualized it’s not even funny. I mean hell, the SNK guys even managed to reduce the amount of clothing on an already very revealing original cast. Whether it’s Mai Shiranui who’s now wearing a cow-themed underwear with horns (image below), or even Mian who’s supposed to be in Sichuanese opera traditional attire is now underdressed. Hell, even SNK’s iconic Terry Bogard was turned into a Fatal Cutie, and is now a voluptuous female fighter with an oversized pair of breasts. I get that sex sells, but this is really over the top even for the developer.

Nevertheless, regardless of this negative aspect of the game, SNK Heroines: Tag Team Frenzy is a different kind of fighting game. You see, lowering the health bar of your opponent to 0 is not enough to knock them out, but requires you to use and land a final attack known as Dream Finish. To do that, it will be necessary that your gauge of SP is full enough, which itself gets filled after landing successful combos, counters or blocking. It’s important to mention as well that you can switch places with your supporting partner to restore your SP bar, but the life bar is common to both fighters (not like your typical tag-team based fighting game like Marvel vs Capcom). In terms of core mechanics, it’s still quite standard, with a strong hit, low hit, special hit and so on, with a strange decision to have the block not automatic but assigned to its own button (which might require some of you veterans to get used to). This translates into simple combos though with a maximum of a 4-hit chain, but that rather helps to bring newcomers into the genre.

SNK Heroines: Tag Team Frenzy is really a plethora of fan-service, especially when it comes to customization. Each of the 14 fighters (and upcoming one via a steady flow of DLCs) have a total of 3 different costumes including their “classic” outfit. The rest of the items are mainly to for you to stand out against your online opponents. Sadly, while there’s hundred of different accessories, they rather lack imagination, and only a rare handful feel truly creative.

For the rest of the game, you will discover in addition to the story mode your usual classic modes like traditional versus, survival, training, a tutorial and local Ad-Hoc lobbies for up to 8 players. While they don’t unlock any new characters in the game when compared to the story mode, these extra modes are here to grind and get in-game currency to buys accessories and customization items. On the front of the online mode, there’s a fun functionality where you can wager your money before each match, which could lead to more intense matches since there’s more than just bragging rights.

Finally, in terms of technicalities, the game is graphically solid even on the Nintendo Switch. Then again, the visual identity and effects are not really demanding, but you’ll see a difference when switching to docked mode. The game gets a tad pixelated, as I assume it gets expanded to fit the screen, but not to a point where it’s not fun. But where I really get annoyed is on the front of sexualizing even the effects. You see, if it wasn’t enough to have half-naked fighters on the screen, the visual effects and even voices are like a very feminine version of a Shonen with each blow or impact. So while we’re accustomed to fire and electrical hits, here everything is turned into some sort of Powerpuff Girls rainbow and cookies effects which could push people away from it.

SNK Heroines: Tag Team Frenzy was reviewed using a Nintendo Switch digital download code of the game provided by NIS America. The game is also available on PlayStation 4 and PC via digital and retail store releases. We don’t discuss review scores with publishers or developers prior to the review being published (click here for more information about our review policy).

SNK Heroines: Tag Team Frenzy is a weird fighting game. It tries to appeal to newcomers by banking on hypersexualization of its characters and downplaying game mechanics which might push away fans.

Review: Dragon’s Crown Pro
Be the first to comment!
Leave a reply » 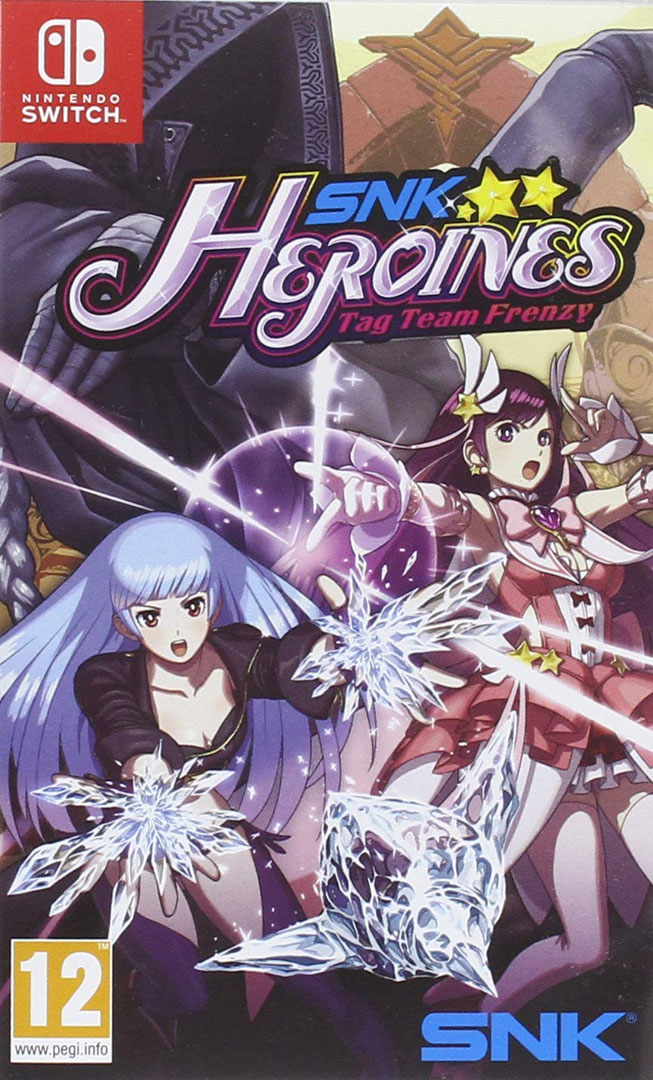