Review: Shantae and the Pirate’s Curse

Humbly starting on the Game Boy Color, the Shantae franchise had quite an interesting transition to multiple platforms throughout the years. Now with the launch of the Nintendo Switch, IP owners and developers WayForward Technologies decided to bring some of its biggest hits, starting with Shantae: Half-Genie Hero which we reviewed recently. Now it’s the turn of the third game in the franchise, one that has been on both the Nintendo 3DS and Nintendo Wii U, but also on PC, Xbox One and PlayStation 4, telling the story of our favorite half-genie who sadly is without powers since Shantae: Risky’s Revenge.

The story is simple: Scuttle Town is once again under attack! Only this time, it’s not because of pirates, but about a certain Ammo Baron and his troops, who intend to turn the city into a military base. But since the Ammo Baron legally bought the town from the mayor, this was enough to force Shantae to join hands with Risky Boots, her sworn enemy, because of a pending invasion from a bigger threat: the Pirate Master.

After some many ports of the game, switching from the Nintendo 3DS to Nintendo Wii U then finally the recent generation of consoles, it seems that adding another platform – Nintendo Switch in this case – didn’t change much. The overall rendering is decent, but not on par with the better update of Shantae: Half-Genie Hero, but at least the illustrations of the characters during cutscenes are neat. In any case, everything moves beautifully, thanks to a multitude of hand-drawn animated sprites in the background, without the need for more advanced special effects. In short, Shantae brings traditional 2D platforming from the good old days but knows how to use the charms by the modernity of the genre.

The overall world of Shantae and the Pirate’s Curse uses the Metroidvania system, inspired not only in level design but also the music, chiptunes and catchy melodies. Between the revived remixes of the previous episodes and the new pieces, Jake Kaufman once again expresses his talent in the art of mixing retro sounds with more contemporary orchestrations, not to mention a more pronounced oriental style.

Since our genie lost her powers in the previous game, she will have to rely on a pirate armory to defend herself. From gunpowder weapons all the way to boots, Shantae arsenal serves her both in combat both also during the exploration and platforming sequences. Added to this are brand new skills, objects and other resources with more or less durable bonuses that you can pocket in the inventory. Finally, the magic lamp is the final part to complete Shantae’s equipment, and its role is not limited to just initiate our damsel’s belly dancing.

While holding the lamp high, you will be able to suck out elements all around the area, notably dark clouds of magic which possessed Cacklebats and are the source of the Pirate Master’s powers. But before getting to that, you have to find them, as they are hidden in all corners of Sequin Land. This quest greatly extends the already very respectable lifespan of the game, in the hope of finishing the game with full 100% completion and discover the true ending.

Shantae and the Pirate’s Curse was reviewed using a Nintendo Switch digital download code of the game provided by WayForward Technologies. The game is also available on Nintendo Wii U, Nintendo 3DS, Xbox One, PlayStation 4 and PC via digital release stores. We don’t discuss review scores with publishers or developers prior to the review being published (click here for more information about our review policy).

• The fun tone of the storytelling
• Bewitching soundtrack.
• Solid gameplay
• A longer adventure

Shantae and the Pirate's Curse was a great game on the Game Boy, and its arrival now on the Nintendo Switch makes is worth a try for those of you that missed it. 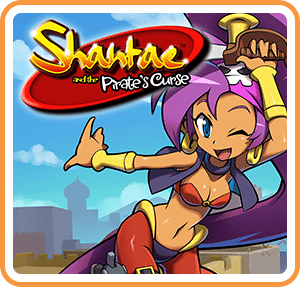