After the excellent Tales From Space: Mutant Blobs Attack of course Guacamelee, Canadian based developer DrinkBox Studio returned with a fun touch based game called Severed, out on Nintendo Switch, a year after its original release on the PS Vita and other consoles and mobile devices.

Severed has you play as Sasha, a young woman who lost her family during a tragic event. Played in the first-person view, you will discover what your character looks like once in front of a mirror, with the awful surprise of missing an arm and covered in blood. It is at that moment that a strange being appears, and offers you a sword, the only weapon in the game which you’ll use to avenge your family.

Severed’s universe is quite “minimalist”, and not in terms of using that style to spare a lack of content or even graphics, but on the contrary a successful one. Sasha will travel throughout a world that seems deserted by humans, where strange monsters are freely roaming the land, ready to kill her, or sometime have a conversation. The game in general has little to offer in terms of conversation or script, and every dialogue will add more to the mystery of this universe, but nothing fully reinforces the mystical lands than the music, done by Yamantaka // Sonic Titan featuring Pantayo.

The title is played entirely in the first-person point of view, in a sort of “Metroidvania” in which Sasha evolves throughout the story in Dungeon-like RPG skills and riddles to solve. Each step makes us discover a new room, or a new place devastated by the horror of this mysterious cataclysm, and completes a little more the map of this world. Some pieces are blocked and will ask Sasha to come back with more powerful equipment – or with the right spell – to keep moving on throughout these labyrinths. You can linger at each corner of the map to try to discover secrets and retrieve pieces of hearts or brains needed to increase your life and magic bars.

When you approach an enemy, Sasha brandishes her sword and it is at this moment that the game unveils its gameplay. Played pretty much like the mobile game sensation Fruit Ninja, you must swipe with a finger the screen of your Nintendo Switch to basically mimic the swings of your sword and cut down your enemies. Now it’s not that simple, and don’t expect to just randomly swipe the entire screen, as the game has several types of enemies, each with their own attack mechanics and weaknesses. Since Sasha only has one arm, it’s up to you to also make sure to parry and counter your opponent’s blow at the right moment, or else end up losing too much health bars and eventually die. In the beginning, you will learn to memorize the movement pattern of each enemy that stands before you, but eventually notice that you should be careful not to kill them too quickly, as you need to increase a focus gauge, to be able to dismember key creature parts to collect as a resource.

Yes, because the game is after all a sort of RPG, creature parts act as “currency” to upgrade your own powers, such as boosting the power of your sword strikes, but things are not that easy. Each type of creature has a limited amount of parts that can be collected, and sometimes will require very precise slices in a limited time… Very limited time.

Severed can be very difficult once you keep on going, not the point of Dark Souls, but demanding in general because of the way you physically need to hold the console. You see, since you must use a finger to on touch screen to mimic the sword strikes, the rest of the motions such as the marching around the dungeons and your first-person view is done with the joy-con thumbsticks. That leaves you with a very awkward holding stance of the Nintendo Switch, which can be quite uncomfortable after a while, especially considering the size of the console in comparison to previous releases of the game such as on the PlayStation Vita.

Severed was reviewed using a Nintendo Switch digital copy of the game provided by DrinkBox Studios. The game is also available on Nintendo 3DS, Nintendo Wii U, iOS devices and PlayStation Vita. We don’t discuss review scores with publishers or developers prior to the review being published.

• Intoxicating soundtrack.
• A moving story.
• The metroidvania and dungeon-RPG elements

• Unfair difficulty at times.
• Control scheme can really become annoying for your hands

Although not perfect, Severed is an enchanting title, an amazing, merge between a Metroidvania and a good old traditional Dungeon-RPG. Behind its minimalist aspect hides an original title, with a great soundtrack that makes you forget the game’s flaws. 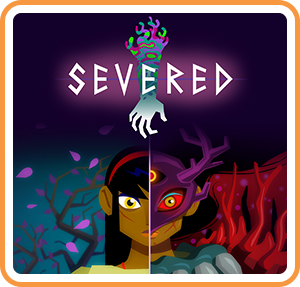