RUINER is a name that tells you right away that a game is no-nonsense, and the new Reikon-developed Devolver-published title definitely delivers on that front. It’s an action-heavy shooter with tons of violence set in the not-so-distant future in a neon-drenched metropolis. You play a very violent individual looking to take on the system, get some answers, and definitely kick some ass. Of course our ‘hero’ is armed with a myriad of weapons and augmentations, so the eponymous ruiner has more than enough to get the job done.

To begin RUINER (I’m just gonna keep the title in all-caps cause it looks cooler) is a pretty tough game. It requires pretty decent reflexes, and you’ll notice the combat is super-fast most of the time. The main concern is knowing when to hit hard and swing like a wild monkey and when to gracefully move away like the same monkey after ballet lessons. The beauty of the game lies in those moments where you finally master the combo system and start chaining together special attacks, heavy strikes, and rapid movements. There’s nothing quite as poetic as mowing down crowds in slow-mo while carefully executing your violence on the battlefield. Pretty much everyone and their cousin has violence and combat, but few games give the action a real sense of weight. Both melee and ranged attacks have a real weight to them, and taking on enemies becomes more and more intense as you get into the flow.

What I loved more than anything was the sheer variety. Between melee weapons, ranged weapons, and special attacks, the game has a barrel of different ways to dispatch nameless, faceless baddies, and it’s definitely a plus for people who like their combat with a little variety.

Much like all Devolver-published titles, the soundtrack here is a real gem. Reikon has put some pretty boss tunes into the game, especially for fans of dark/ambient music in the electronic genre. The OST is a real treat, and I was blasting it for days after my playthrough

In fact, RUINER gets tons of points based on its aesthetic. They’ve really aimed to create a full-fledged cyberpunk world here, and the visuals are simply spectacular. Much like all cyberpunk (or all good cyberpunk), the world has a very busy feel to it. It’s got a ton of things going on at the same time., It’s pretty simple in 2.5D, but it really conveys the sense of a digital dystopia.

I would say my main issue is that there isn’t a solid narrative to go along with the visuals. The story is fairly basic; it’s mainly a revenge plot with some little twists worked in. The main character, in particular, just doesn’t get enough focus, even as a villain.

In terms of progression, the game has a good sense of difficulty curve. The objective is usually to off a bunch of dudes, but there’s a little bit of exploration throughout. I started off on hard mode, and I was fine, except for some dodgier fights. I would have actually liked a survival/wave mode but ass such there’s really just the campaign

Other than that, if you’re not used to isometric action titles, it’ll take a little getting used to. On the whole, however, controls were smooth and responsive. On the whole, RUINER is a game that may not be as smart or cerebral, but it makes up for it with some of the best visceral action I’ve seen in a while

Ruiner was reviewed using a PC downloadable code of the game provided by Devolver Digital. The review was tested on a PC running Windows 10, with an 8GB NVIDIA Geforce GTX 1070 fitted on a 4th Generation Intel i7 4790 3.6Ghz CPU and topped with 16GB of RAM. The game is also available on Xbox One and PlayStation 4 via digital store releases. We don’t discuss review scores with publishers or developers prior to the review being published.

RUINER is a game for fans of brutal action and mayhem, and it’ll appeal to your inner psycho quite nicely. It’s not really as memorable in terms of storyline, but its thumping soundtrack and vibrant visuals make it a modern classic 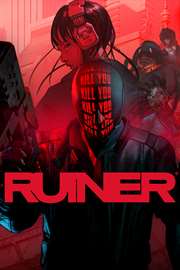