ACE Team, the small Chilean studio has been quite productive over the past few years, and after delivering Zeno Clash and The Deadly Tower of Monsters recently, they are back with a sequel to their first true success: Rock of Ages 2: Bigger and Boulder. Playing as a stone ball that rolls against its enemy in the hope of crushing them, that’s pretty all you need to know about the game, on top of a heavy dose of humor.

With Rock of Ages II: Bigger & Boulder, don’t expect much change from the original, even in the sense that it is still difficult to determine in which category the game falls in: a strange strategy game with a hint of tower defense. For the basic story mode, or at least what resembles it, Atlas is incarnated while he has just unintentionally let go of a massive boulder on Earth. And while he’s trying to get it back, he’s going to have to flee in front of Zeus, who is not in a good mood for what just happened. This is how we will march through a map of Europe, while we end up having to fight historical protagonists like Hercules, Joan of Arc or even William Wallace.

The goal of the story mode is simple: You have to direct the boulder on the map to go to one “mission”, win it, in order to unlock the following one and thus continue our journey, while unlocking new boulders or assets that will serve us during the battles. These confrontations will always take place in the same way every time, where yourself and opponent will be barricaded in their castle, and you’ll have to roll your boulder to ram the gate of the fortress. Once that gate is open, you’ll be able to squish your opponent, but it’s not that easy, as you’ll face numerous obstacles along the way such as ditches and ravines, which will kill the momentum of your boulder, but also defensive structures, thus the tower defense part of the game.

The obstacles on the ground are done to prevent us from reaching too much charging speed when we hit the door, but also to shave out our boulder’s health life. So it’s all about your “platforming” skill to avoid your opponent’s defensive measure, as well as sometimes having to face a very tortuous path or sharp turns. Later throughout the game, you’ll be able to select different kinds of boulders that will help you out, with its own stats or abilities, each fitting to different instances and challenges.

If you have already seen or played the first Rock of Age, you’ll easily realize that the concept remains identical in this sequel. It will be necessary to be careful to earn enough gold by laying mines nearby, in order to buy defenses, while attacking the enemy fort as soon as our boulder is built and ready to roll (can’t believe it took me that much time to use this sentence). Although very entertaining and funny, I’ll admit that the gameplay turns quickly into a boring repetition (we admire the nice play on words), especially since a good dose of chance is also needed to finish levels.

Story to bring a little more variety to Rock of Age II, developers have this time included boss fights. Sadly, considering they are easily done, it is enough to touch their weak point to beat them. I would have really appreciated more challenge, especially as the entire solo campaign is far from very difficult. Fortunately, the game has an omnipresent humor to it, especially during cinematics where we admire the diversity of these historical or mythical characters.

Rock of Ages II: Bigger & Boulder was reviewed using an Xbox One downloadable code of the game provided by Atlus. The game is also available on PlayStation 4 and PC in online store releases. We don’t discuss review scores with publishers or developers prior to the review being published.

Rock of Ages II: Bigger & Boulder doesn't change much when compared to its predecessor, but at least it's still a decent title. In a way, with the amount of added content, it could've been considered an expansion pack of the original game, full of humor but bogged down a little with its very repetitive gameplay. 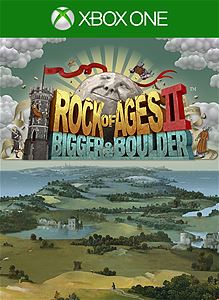