After playing a few hours of Renowned Explorers, I realized something. This isn’t a videogame at all. It’s a board game in disguise! But thankfully, I’m a big fan of board games, and I’m a big fan of accessible, strategy-based boardgames that are simple to pick up but tough to master, and that’s just fine. As a game, renowned explorers places emphasis on your personal preference and choice for playing the game. Simply put there isn’t a ‘right way’ to play, and you’ll find that you can tool around and try different play styles.

To begin with, you choose a ‘captain’ and two crew members. You choose between scientists, fighters, scouts, and speakers. Each one of these has unique abilities, and you’ll need to choose a good mix to get ahead. The game’s objective is to gain ‘renown’ by exploring and getting your name out there.

The game puts you on a grid where you can move from point to point, taking ‘resources’ each turn. Every so often you get ‘encounters’, and this is where the game goes in a unique direction. You have three main types of encounter: aggressive, friendly, and devious. Aggressive attacks are just barebones violence, deviousness involves intimidation and manipulation, and friendly is killing with kindness. You choose an approach, that approach changes the mood, and then you choose how you want to proceed. For example, you can butter up an opponent with compliments, which weakens their physical defense, and then wallop them for a nice win. It’s a simple system that becomes surprisingly intricate, and it makes you evaluate every move. In fact, I’ve found that I don’t like how rote some turn-based games can get, and Renowned Explorers adds some much-needed variety.

The game’s character system grows after you complete levels, and I found it was pretty well done, using a simple ability tree to decide how to customize your characters as they gain experience, as well as a very pen and paper feeling perk system to highlight the skills of your characters. Unfortunately, for me at least, the character system felt a little shallow, with few choices and levels, each character has a very limited spread of paths they can take. Some people would likely argue that the simplicity makes it more appealing, but I’ve always preferred more depth and complexity to games.

The campaign is fun, and relatively short (a few hours to beat it). Much of the premise of the game revolves around the idea of the game being highly replayable, and while superficially it appears to be, after a number of plays, I found that the game began to grow a bit repetitive. In terms of content, there are only 11 expeditions in the base game, 3 of which are mutually exclusive (you play the one that is most suited to your team’s playstyle as the first expedition, the others can never be chosen), leaving you with only 8 choices for the rest of the game. Within each expedition, there’s quite a bit of variety, and no single expedition ever takes the same path, but they always reach the same destination. Once you’ve played an expedition once, you always know how it will end and this takes away a lot of the fun of exploring. After a few campaign playthroughs, its likely that you’ve played every expedition multiple times and have seen most, if not all, of the optional events within.

This is why the new expansion, More to Explore, rounds things off nicely. It adds two new expeditions with their own unique events and boss-fights, which tends to extend the bang for your buck. It adds in a new mechanic, which is the campfire. After exploring for a little bit, you get the chance to set up camp and ‘tell stories’. Upon doing so you can choose a couple new abilities, each giving certain benefits. This helps you progress through the game.

I would say once you’ve learned the mechanics, it’s really about trying your best to maximize your resources. Renowned explorers is a game that you’ll only like if you’re into racking up scores, as the actual mechanics aren’t that inherently fun. However, if you enjoy building up your numbers and collecting renown, Renowned Explorers is a wonderful indie take on table-top.

Renowned Explorers: More to Explore! was reviewed using a PC downloadable code of the game provided by Abbey Games. The review was tested by Mazen Abdallah on a PC running Windows 10, with an 8GB NVIDIA Geforce GTX 1070 fitted on a 4th Generation Intel i7 4790 3.6Ghz CPU and topped with 16GB of RAM. We don’t discuss review scores with publishers or developers prior to the review being published.

Renowned Explorers: More to Explore! is a game that strategy table-top lovers will certainly enjoy, and its simple mechanics hide a deep, intricate system of progress that pushes you to really think things through. Its light humor and likeable cast of rogues is a great bonus. 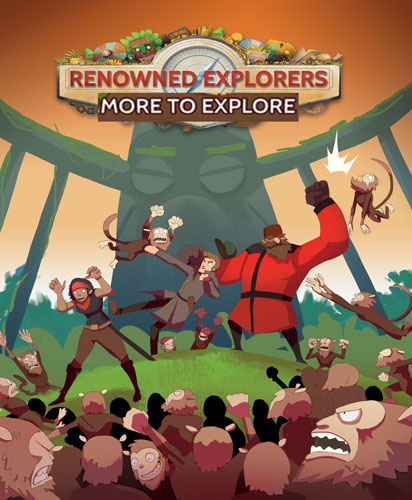