Remember the golden age of the 1990s platform games? It’s was truly an era of innovation and competition, which gave us ambitious settings, new gameplay mechanics and a constantly everchanging level design. With Rad Rodgers, Slipgate Studios aims to play on that nostalgia, and revive those childhood memories with visuals that could become a new standard for platform game. Already released a year ago on PC, the title comes back with new bonuses to convince console players to try it out.

Originally funded on kickstarter, Rad Rodgers does not reinvent the wheel but use numerous recipes brilliantly in this final version. The childish and colorful aspect of the universe could be deceptive, as the game is definitely addressed to a mature-minded public fond of the contrast between the visuals and its script. The beauty of this Slipgate Studios creation (recently acquired by THQ Nordic) is one that few dared to do until these days, unless you can count on titles like Conker Bad Fur Day or even Jazz Jackrabbit, by using a mature dialogue and script, while while remaining playful throughout the adventure. The result overall is a title that assumes totally its dubious humor in a universe that is looney as hell.

The synopsis of Rad Rodgers is rather simple by base. On a sleepy night, Rad is awakened by his TV and game console turning on its. After trying to turn off both devices, our young boy is sucked into his TV and teleported into a universe that could be his worst nightmare but it’s just the opposite. With no real explanation, he is now an integral part of his favorite video game, ready to roll with a trusty companion that is none other than his own console now alive and named Dusty.

The gameplay features a sort of Banjo & Kazooie vibe to it, with Dusty lodged in Rad’s backpack which will come to support him when it comes to grabbing ledges, smashing enemies, or even operates on its own in special colorful levels that reminds us of the retro days of sidescrolling titles. The maneuverability is almost perfect which makes it easy to get used to the game’s physics and their intuitive jumps system, and Rad’s gun is easy to aim and shoot from like a Metal Slug game. With an omnipresent humour, our duo will then explore the Pixelverse, in search of hidden objects in each level to continue its adventure.

Despite an arsenal that can be changed by picking up one-time bonuses, the feeling of truly becoming powerful like a hero doesn’t really happen, and your opponents don’t get any stronger either. The thing is enemies are not difficult to kill, with predictable patterns, which gives you a fairly easy progression. It’s a bit disappointing because Rad Rodgers gives the impression of wanting to position itself as a hardcore game, but seems to first fulfill the needs of a more casual gamer.

The game though has a great retro feel to it, with modern design, in both its visuals and writing. The pixelated worlds of yesteryear and today’s 3D are cleverly fused, full small of details and life. But it’s the sound design that is a real delight and a flashback straight into the 1990s, and definitely one of my favorite part of Rad Rodgers. The voiceover are in tone with the mood of the game, with a Rock and roll soundtrack that fits right at place in the adventure.

Rad Rodgers was reviewed using an Xbox One digital download code of the game provided by THQ Nordic. The game is also available on PlayStation 4 and PC in digital and retail releases. We don’t discuss review scores with publishers or developers prior to the review being published

• A lack of difficulty (even at high levels)
• Short lifespan overall

All in all, Rad Rodgers is one solid platformer from Slipgate Studios. Sure it's not reinventing anything major in the genre, but knows how to merge the best in platforming games from our past and give it a modern approach.

Review: Ion Maiden
Be the first to comment!
Leave a reply » 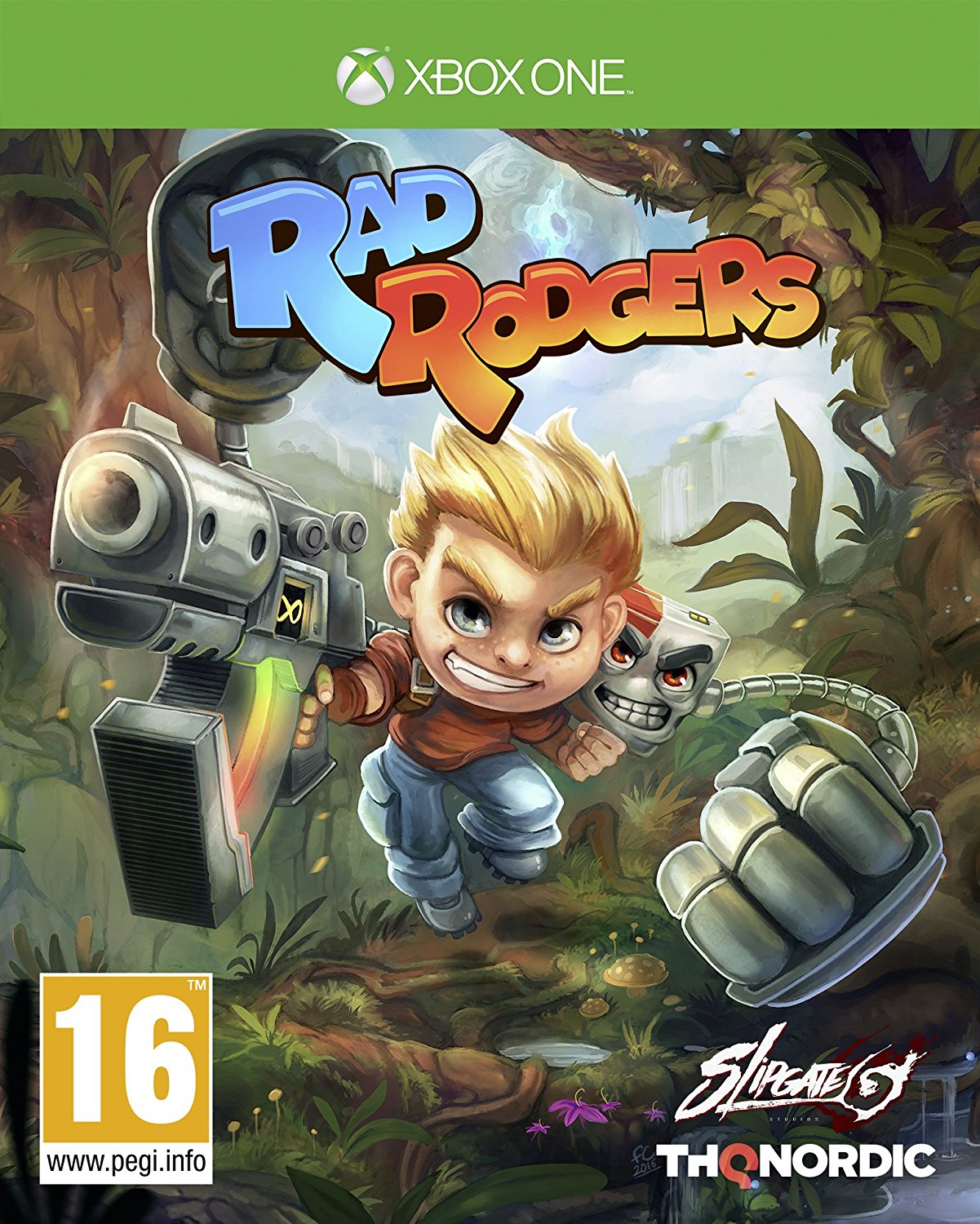