I often start my reviews by introducing the developer and giving some background on their work, and with Supergiant Games, I almost feel as if it’s not necessary. Their first two games, Bastion and Transistor, were massive hits that got a bunch of mainstream success. Transistor was even given prominent billing in Sony’s E3 show back in 2014 (when they still cared about indies). But I still feel we need to examine their work before diving into their latest venture. Supergiant Games’ main claim to fame thus far has been their ability to craft massive, elaborate worlds with unique characters that are hardly conventional but still resonate with the player. The gameplay is honestly not as relevant in people’s minds, because when we think back to Bastion we’re a lot likelier to recall the prescient narrator, and when we think back to Transistor we’re likelier to recall the vivid artwork.

So to start with, Pyre will probably stick with you more than anything because of its incredible hand-drawn animation and its bizarre dystopian world. The game unfolds like a visual novel, with animations and transitions happening as you click text bubbles. The story takes a while to become coherent, but the bottom line is that it’s about a bunch of ‘exiles’ who band together to find their promised land with the help of the protagonist, who is known as The Reader. The character designs are probably the most bizarre Supergiant Games’ artists have come up with, and you can definitely tell that this is their third game because of the level of creativity. However, as strange as they look, the characters are once again brimming with personality, and each one has a unique backstory and struggle that plays out through the narrative.

The game’s story unfolds pretty gradually, but it’s a rich one that deserves telling properly. I won’t go into too many details, but I will say the ending did actually cause one of those ‘whaaa’ moments with me. As with most visual novels, there’s a branching storyline, and I’d say you need at least two playthroughs to get the proper gist.

In terms of gameplay, Pyre might be one of the stranger pitches you’ve heard this year. It’s essentially a type of top-down football with 3 players on each team. Except, instead of a ball, you have an orb, and instead of a goal you have the eponymous Pyre. The game takes a lot of quick thinking, as you only control one player at a time. Holding the orb means you’re vulnerable to attack, and of course if an opponent holds the orb, you can just rush into them and take it. You start off with three team members: one heavy, one light, and one moderate. The idea is that you need to mix their abilities and skills to outmaneuver the enemy team. Finally, you have two choices for the ‘goal’ as it were. You can rush into the pyre, which is a lot easier and guarantees you a goal but takes out one of your players temporarily (they get burned in the pyre) or you can fling the orb, which doesn’t guarantee it won’t get intercepted, but is a safer play overall.

Past that Pyre has a surprisingly complex system of customization that makes use of various ‘talismans’ to switch up the core gameplay. While it’s a simple concept on paper, Pyre’s unique twist on football has a ton of bells and whistles, and it definitely merits inviting a friend over or playing online. As usual, the AI is surprisingly clever, but I had much more fun trying my luck against online opponents and one time via local multiplayer.

Pyre is definitely one of the more unique concepts we’ve seen this year, which makes it a Supergiant game through and through. It’s not just another action RPG though; rather, I think it’s a promising entry to the local multiplayer compendium that’s backed up with a simple yet very well-told narrative that makes its singleplayer a memorable experience. Of course, it also bears the Supergiant Games attention to detail and polish, which are arguably some other features that have helped them become (some pun intended) giants in the indie world.

Pyre was reviewed using a PC and PlayStation 4 downloadable code of the game provided by Supergiant Games. The review was tested by Mazen Abdallah on a PC running Windows 10, with an 8GB NVIDIA Geforce GTX 1070 fitted on a 4th Generation Intel i7 4790 3.6Ghz CPU and topped with 16GB of RAM, and on PlayStation 4 by Nazih Fares. We don’t discuss review scores with publishers or developers prior to the review being published.

Supergiant Games delivers another unique, memorable title with Pyre. It manages to work on two totally separate levels, presenting a beautifully drawn fantasy virtual novel and a surprisingly complex twist on the classic game of football. Its story can be a little slow and a little bizarre, but it ends up having a lot of charm, and its core game is likely to become a local multiplayer classic. 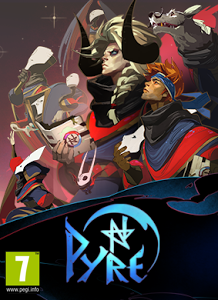