While 2017 already seems to be set with a lot of fresh ideas, new Nintendo Switch IPs, it’s also the year of new racing simulations. With Forza Motorsport 7 and Gran Turismo Sport coming in October, the season for sport simulations racing games kicks off with Project Cars 2 from Slightly Mad Studios and publisher Namco Bandai.

Despite its clamorous appearance, Slightly Mad Studios’ isn’t as demanding as other true racing simulators like Assetto Corsa or the ridiculous iRacing series. Instead, Project Cars 2 has to deal with a wider audience and constantly navigates between pure and hard simulation and the arcade-ish player, as other have done (like Forza Motorsport and Gran Turismo). The game easily showcase this extreme in simulation levels, as you go from one page to another in the rather more ergonomic menus, with a series of driving aids for the amateurs – braking, steering, damage management, etc. – or opt for none like the true virtual driver you are. Compared to Project Cars’ first game, this sequel is a tremendous leap in physics, with a special mention for the grip sensation, now more sensitive, with an overall finer driving feel, and the change of surface has an immediate impact on your vehicle.

At launch, Project Cars 2 will have 170 cars to choose from, with each vehicle having its own reactions and force to get used to, and it’s up to the player to adapt its steering to suit the environment. It will take numerous laps of before mastering all the type of cars, and there’s plenty of them, ranging from Formula 1, GT, Indycar and even Go-karts. Project Cars 2 offering is wide and will satisfy even the most demanding driver, even if the realism does not reach the same level of execution depending on the class chosen, but at least I’m really happy with their rallycross mode, which is great considering it is Slighty Mad Studios’ first attempt at the sport.

The same load of content can be found on the circuit side. Claiming to have the highest count track roster of any game, Project Cars 2 has over 140 routes spread out in sixty locations, which some can be a real surprises. You’ll obviously find the iconic Laguna Seca, Le Mans, Nürburgring, but there’s some great rural tracks like the Circuit Rallycross de Lohéac or even the the Dubai Kartdrome. There is even the possibility to drive historical circuits as they were back in the days, like the Circuit de Spa-Francorchamps or Autodromo Nazionale Monza, but also some fun extreme condition tracks like the Sampala Ice Circuit.

On the front of weather condition, LiveTrack 3.0 was one of the highlights of Project Cars 2 during its reveal, and they were right to bet heavily on it. Behind this somewhat technical name is a system that allows the races to undergo real weather changes, which evolve in real-time, and have a direct impact on the runway. While most other games opt for just a visual weather engine, Project Cars 2 goes the extra mile, by showcasing how mother nature can completely ruin your skills if you’re not used to those conditions. For example, after a few laps under a bright sun, rain fall might occur and cover the surfaces of the circuit, which consequently will result in grip losses of and force the player to adapt his style of piloting, or end up losing precious seconds – or even crash – while driving in huge puddle of water. Where it gets great visually and shows off the weather engine, is when the sun gets back, and you start seeing those puddles of water evaporate from the heat of our star but also the friction of the car’s tires. To make the long story short, Project Cars 2 requires constant adaptation and it is not uncommon to have to go through the pit stops to make some changes in line with the weather forecast. Rainy, snowy, foggy or even stormy, the game handles perfectly the weather conditions on top of a great day-to-night cycle.

With controller in hand, Project Cars 2 plays decently. You actually feel the weight of the vehicle, ranging from the mass transfers or the loss of grip, as well as the roughness of the road which are transcribed with a fairly astounding fidelity. You’ll soon learn that it is necessary to know how to press gently on the triggers, in a sense of how Forza Motorsports 5 introduce Impulse Trigger on the Xbox One. But even if the game does not meet the requirement of a so-called “real” simulators, it can be very frustrating for pilots less accustomed to this type of games. For example, when exiting a turn, avoid accelerating randomly, as you need to keep in mind many factors into account like the temperature of the wheels which affect your grip. All these elements play a big factor in your driving experience, but the advantage of Project Cars 2 is that, like its predecessor, offers a hell lot of settings and options to play around. Everything is absolutely configurable, from the number of opponents to their aggressiveness level, or what you can deactivate in terms of options such as tire wear, breakdowns, pit stop.

On the front of game modes, Project Cars 2 is pretty much a continuation of the first game. The title is thus divided into three main branches which are Career, Quick Play and Community. Before embarking on your for you first career season, players can opt for a solo “training” race on the circuit, with the car of your choice, and even do that online in private practice sessions. Whether it’s online or online, Slightly Mad Studios’ game does the job, but mostly relying on its Career mode. While I expected something more, players basically start a career with the discipline of his choice and even according to his own options, and go through races, qualifications or even training tours. Eventually, more challenges will appear, with Invitational Events (which are really fun and range from Historic to Urban races), but also the concept of affinities with manufacturers to unlock special races once you gain enough affinity with the brand.

With such a large community built over the success of the previous game, Slightly Mad Studios went full on with the eSports angle, and built competitive and broadcasting tool in the root of Project Cars 2. In the community section of the game, players will be able to catch with the competitive news of the game, join and compete in events or leaderboards linked to your profile, but the best part is that you can now be a show director and broadcaster. In the role of the director, the player can manage all the camera shots and choose the cars on which he wishes to focus, as if it were a televised event. As for the broadcaster, in addition to relaying the race on YouTube or Twitch, he will have the opportunity to do commentary on the race. This is a great tool for eSports operators but also smaller communities that can now show off their driving skills in a professional way.

My main concern though about the game hasn’t changed sadly, even though it was pointed at numerous times in the first Project Cars, and that’s the issue of the AI. For a game claiming to reach for realism, the AI drivers seems to be switched into bumper mode, with a weird aggressiveness toward pushing you off track. While this defect can be fixed by modifying the aggressiveness of the opponents in the options, it doesn’t truly disappear, and can be infuriating. Among the other inconsistencies that I have noted are the collisions, which besides being a little strange, sometimes have the art being illogical, almost to the point of being a development bug.

On the technical front, Project Cars 2 is one prestigious and solid game. In addition to the exemplary 3D models of the cars, we now benefit from meteorological effects that are just astounding (previously mentioned above). The graphics engine is mind-blowing, and I almost regret that there are not enough wide tracks to admire the sheer work done on the sceneries. The most anal of all gamers will be mesmerized by the overflow of crisp textures, even if some slight tearing occurs from time to time (on Xbox One at least). But overall, the game stands out very well, and it is worthy to mention that it runs with upscaling at 4K on the PlayStation 4 Pro so you can enjoy a high quality HDR game. For the more demanding ones, the PC version of Project Cars 2 is insane, supporting up to 12K resolutions, 21:9 aspect ratio and triple-screen support from the start.

Project Cars 2 was reviewed using an Xbox One downloadable code of the game provided by Namco Bandai. The game is also available on PlayStation 4 and PC in both digital and retail releases. We don’t discuss review scores with publishers or developers prior to the review being published.

• An amazing steering and driving sensation
• LiveTrack 3.0 system
• New type of challenges like the Rallycross are a blast
• Excellent helmet view
• That graphic engine
• Insane ammount of content whether it's cars or circuits
• Built-in eSports

As expected, Project Cars 2 is an excellent racing game, continuing its legacy of appealing to hardcore or simple racers. Full of love for the motorsport, Slightly Mad Studios added so much content that you probably won't get bored for a long time, yet still has its flaws when it comes to AI and illogical collision system, which hopefully will be fixed with future patches.

An accomplished, award-winning gaming professional with more than 12 years of experience in the videogame industry, Nazih Fares has worked in public relations, marketing, eSports and localization for over 14 different publishers and more than 90 global brands. Fares is currently MENA Communications Manager at Blizzard Entertainment, based in The Hague. His views on this site are his own, and not those of his employer.
More Goodness
Editor's ChoiceFeaturedMultiplatformMultiplayer 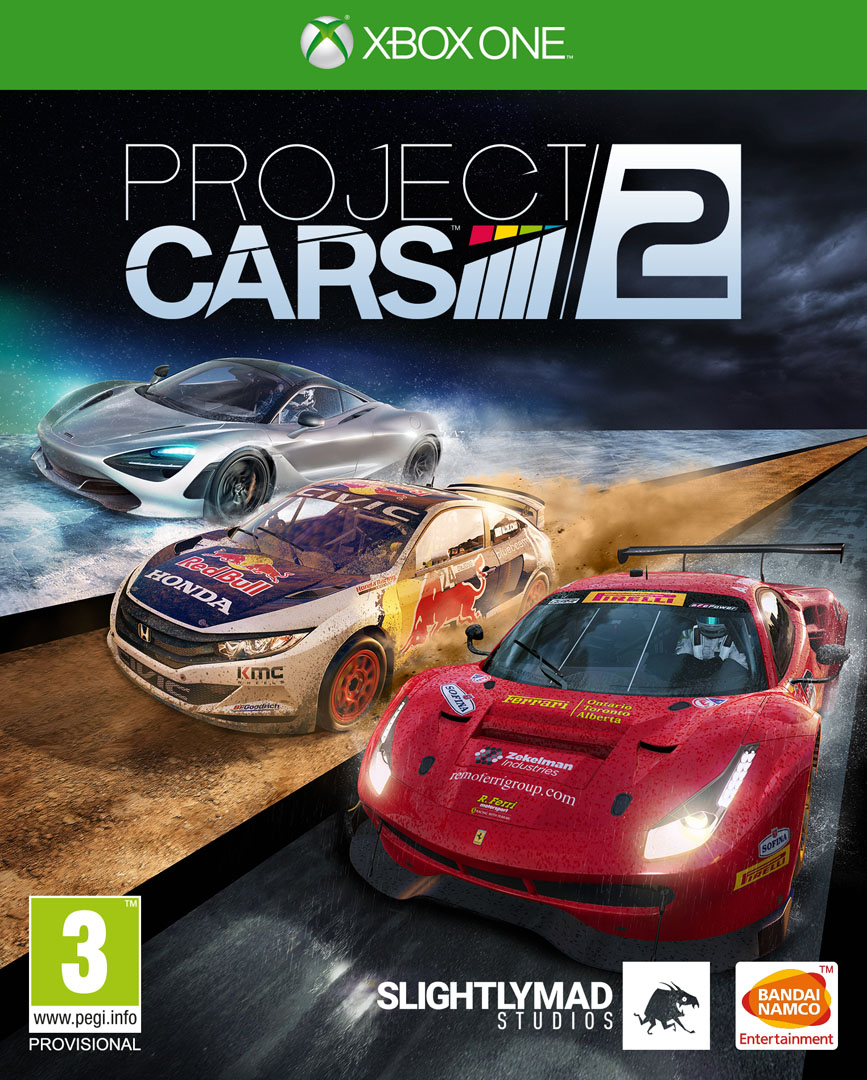