Editor’s Note: Couple of month after the game’s release on Xbox One (and other platforms), this review has been updated by Nazih Fares following the release of the game on the Nintendo Switch as well as the updates to all customers which reflects on the overall score, and final verdict.

Having already been ported on consoles after a decent amount of players enjoying the title on PC, it was up for Portal Knights to join the Nintendo Switch roster, undoubtedly bringing an advantage that other platforms didn’t have: portability… Well unless you count laptop PCs.

Like most Nintendo Switch ports, the game makes uses of the console’s extra features, notably the touch screen. If it doesn’t seem like much for you, it should as all the menus and actions can be quickly accessed via a simple tap on the screen. You can therefore change equipment, craft objects or even mine at the touch of a finger, which makes it It simply the best feature of this port.

In dock/TV mode, as on other console, you will have to control everything via your Joy-Con buttons and triggers. While it’s not really a weird control scheme, it still less convenient in terms of ergonomics. But what’s great is getting access to Portal Knights’ huge content in the palm of your hand. It is an intoxicating experience, especially since everything everything is fluid and clean, and of course benefits from the latest updates which includes the Vacant Islands, new boss quests and more

The multiplayer mode on the other hand is pretty neat, opting for either a local splitscreen which can get a bit tricky in terms of visibility on both docked and handheld mode, or the wireless ad-hoc connection which is great. Of course you could always join online games but I could see some latency from time to time, but nothing too bad.

For the rest, Portal Knights retains all its qualities as well as all its faults, like its really annoying camera, which can be a pain to manage especially in confined places.

Over the course of the past few years, numerous titles emerged mixing action, crafting and RPG  in a randomized world, with a lots of Minecraft spaces. Some like Terraria had their own flair with a 2D side scrolling perspective, other like Portal Knights is part of this trend wanting to add a touch of adventure and an actual goal to achieve so that the creation theme is not the only thing to do in the game. And so becomes your story in Portal Knights, where you play as a character who lives in a world made up of floating island, travelling between them via portals that must be reactivated through a set of challenges and tasks.

Portal Knights starts like any RPG game, by choosing your protagonist’s sex, class among the three available ones (ranger, warrior or mage) and of course a range of visual alteration, like changing hairstyle, ear piercing, etc. The choice of your character’s class will have an influence on the fighting part of the game, since the Ranger will obviously be focused on long distance combat with his bow and bombs, whereas the Warrior will fight hand-to-hand with his Sword or Ax, and the mage can cast powerful spells with Rods and Staffs. Character is created, you are ready to begin the adventure, arriving in your world after being hit by a cataclysmic event called the “Fracture”, which divided it into several floating islands, each with its own fauna and flora. To connect them and rebuild the world, you’ll have to connect portals together different colors (blue, yellow, green and red) by simply crafting 6 cubes of each color, which seems simpler than it is.

But before you set out to discover the world, you must familiarize yourself with your character. That’s why your adventure begins on a “quiet” island to learn the basics of combat, such automatic enemy camera lock, interaction with the environment, crafting and managing your inventory. By exploring a little, you will quickly realize that you are not alone and that other NPCs are living here, usually giving you quests like your typical fetch-and-deliver tasks, which will give you experience points and rewards, or will allow you to trade with them.

Another RPG element found is around character building, which when you have enough experience, will allow you to level up, and assign 3 skill points to your character’s characteristics, namely Constitution (of your HP), Strength (for melee attacks) , Agility (for speed of movement), Dexterity (for distance damage), Wisdom (for mana points) and Intelligence (for damage caused by spells). In general, you will boost those that are more linked to your class and ditching others, as there’s no point to raise intelligence on your warrior if he’s only focused melee damage. In parallel, every 5 levels you go up (with a level cap of 30), you can choose a particular talent, which adds a touch of RPG in your abilities, such as for example the Mage’s Frost Armor which slows down by 50% melee attackers for 3 seconds But that’s not all, because you’ll also have a pet that will follow you to the edges of this world, and can be anything you want from an animal like a cat, to a magical fantasy being like a dragon.

Now if you’re more of a builder, hoping for another Minecraft clone, then Portal Knights will perfectly fill that tick box. The most hardcore architects will be satisfied, but you will be forced to go through the adventure to discover new lands and upgrade your kit, tools and build material with new ressources discovered. Since each piece of the world contains its own minerals, it will be necessary to store them up or go back and forth to have the sufficient number of elements for another land’s task or mission. After all, as in all Minecraft-like games, the basis of the game is mining for resources and crafting. After having your workshop at hand you will be able to manufacture many tools if you have the necessary components. And as often, the more powerful or effective the tool is, the harder the materials will be to get by mining or even killing enemies. Moreover, The workshop, the oven, the anvil (used to make a weapon for the warrior), the archer’s workshop (for the ranger), the altar (for the mage), Also the drawing table which allows you to have more blocks and furniture at your disposal.

Now in Portal Knights, fighting is ubiquitous since enemies are on all islands. To fight them, nothing is simpler, just attack them with the R2 key via a camera-lock system. In this configuration the X key allows you to dodge the hits, but unfortunately prevents a jump. Aside from that, the bestiary is diverse and the more your adventure progresses, the more enemies will be tougher with bigger hit bars, giving you more experience and materials needed for some crafts or even upgrades.

My only issue with the game is probably the camera. In some environments, I sometimes had problems with the camera, which put me in front of a tree or forced me to switch to first person view during dungeon fights. Other than that, the game can get repetitive, but if you have friends, it’s a great building game with a squeeze of action-RPG flavor for good measure.

Portal Knights was reviewed using an Xbox One and Nintendo Switch downloadable code of the game provided by 505 Games. The game is also available on PlayStation 4 and PC via retail and online stores. We don’t discuss review scores with publishers or developers prior to the review being published.

Portal Knights is a game that will satisfy lovers of the Minecraft-like genre, but unfortunately remains too much of the same despite the extra adventure and RPG side of it. It's nevertheless a great building game with a squeeze of action-RPG flavor for good measure if you have friends.

An accomplished, award-winning gaming professional with more than 12 years of experience in the videogame industry, Nazih Fares has worked in public relations, marketing, eSports and localization for over 14 different publishers and more than 90 global brands. Fares is currently MENA Communications Manager at Blizzard Entertainment, based in The Hague. His views on this site are his own, and not those of his employer.
More Goodness
505 GamesMinecraft CloneMultiplatformMultiplayer 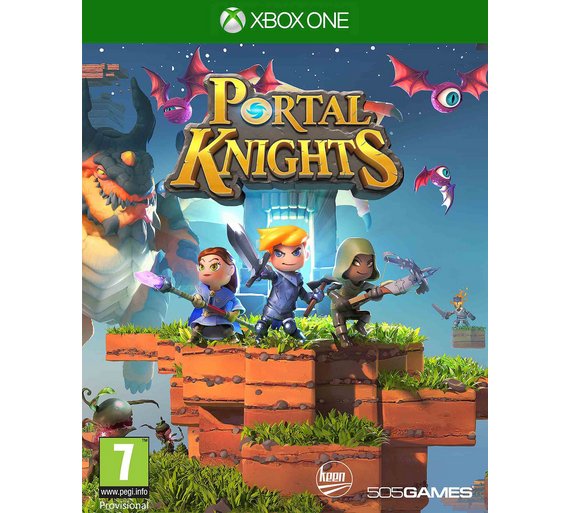