It is hard to believe that it only took 3 years for this Kickstarter to gather over four million dollars to be able to create an RPG game that still adheres to the origins of that genre while staying updated with today’s context in video games. With less than seventy thousand contributors, we could potentially have the best game that has ever been funding by Kickstarter: Pillars of Eternity.

If you are familiar with the traditional RPGs such as dungeons and dragons, then you will have no problem getting into this game as a veteran. However, if this is your first RPG then you are in for a treat and a great way to get to know the genre. Character development and storytelling is core to any successful RPG game and Obsidian has done that with absolute accuracy and quality. Starting off directly with 6 different races and at least 15 sub races. You have your usual Elves, Humans, Dwarfs however there are some new additions to the mix that we are not used to such as Godlikes who master mystical powers, the Aumaua a Herculean race and the Orlans who look like tiny trees but have the gift of being extremely fast and smart.

A lot of effort has been put into Pillars of Eternity: Complete Edition. Every single detail you decide to have during the character creation has a big impact on the game experience. The environment, other character reactions, the progression, …etc. It is very rare to see something that has no purpose or utility in the game.  However, there is one thing that I personally thought could be better and might contradict what I said earlier but the facial options in the character creation lacks options. It would have been great to be able to have more control on the personalization of the body and face designs. But again, that is just a small cosmetic detail which has no major impact to the game.

I have to admit that I would have preferred playing Pillars of Eternity: Complete Edition on PC as it is much easier to navigate these types of RPGs using your mouse but it took me around 15 minutes to get used to it on the PS4’s joystick, especially since the Pillars of Eternity: Complete Edition is a re-release for consoles. I had to hook it up to my monitor as the UI is not well optimized for TV playing, otherwise I would just put my chair at couple of feet from the TV set in order to read the stories and interactions with the AI. Like I said, a game to be played on PC. On the other hand, the in-game UI is surprisingly clean. Not too much and not too little the perfect balance between the menu options, inventory list, combat mode, … I was quite surprised as I didn’t expect such cleanliness, RPGs are usually known for chaotic interfaces.

With all that being said, we can now enter into the game details itself. From the get go I was expecting something good. I mean you do not put that much effort in the UI, Interface, character creation and then deliver a bad game! The game is narrated and has incredible VO talents. You start of the game as part of a convoy heading into the woods. You rest for the night and it all begins … Your adventures are in the world called Eora and the story is well built and a simple progression system. You have a massive map with certain geographical areas that unlock as you progress. You choose your location and explore in real time with your heroes and friends, spending most of that time fighting, picking up thousands of things until you are done and on to the next area. One thing though I must mention is that you will have A LOT to read in this game. Yes, certain parts are narrated but the copy is unbelievably rich and well written. If you are the type of gamer that doesn’t like to read then I recommend you drop this game otherwise you are in for a treat.

Now you are probably wondering if this is all about exploration and not enough fighting but I am here to ease your doubts. When you start fighting and magic kicks in you are in for a “Cirque Du Soleil” show. Pyro techniques, bloodied battlefields, flashing orbs, sound effects that puts you in the front seat, the whole lot. In addition, fighting can be played in real time however I found myself abusing the Pause button as I like to plan every single move ahead of time. The battles can get difficult. Everything matters, your character placement, what spell or skill to use or who to attack. You should be careful because unlike other games, once a character dies he / she is gone and you can’t bring them back. So from the get go you need to plan every single step. This brings me to my next topic. Yes! You are not alone although you have your main hero you will quickly realize that your party keeps growing. As a matter a fact, you start the game with a companion. And in case it is not enough, you can visit taverns and recruit followers. Now the tavern has a special feature. Let us say that throughout the game someone you enjoyed died, you can then visit the tavern, and with some gold recruit and create a person with the same features and skills as the one that died. Sure, it will not be the same person but they will have the same purpose to your team.

Obsidian did great on the main story and its surrounding world. Everything has been thought of, the writing, speeches, … I rarely stumbled upon a useless or repetitive quest. One of the features I enjoyed the most is the fortress. At one point in the game, you will be able to create your own Head Quarters. From there you can do many things, reparations, defense constructions, building your way to a 4-star fortress with rooms lodging other travelers. Felt like a little Hotel Sims meets Clash of Clans.

When it comes to esthetics, the game looks good overall with enough variety to give you different seasons, locations and in game décor. But the engine itself could need some work. Changing zones on PS4 was painful and I do not want to even begin to think how bad it would be on a PC without SSD. Fortunately for us, this is masked by an above average soundtrack.

It is a shame that Pillars of Eternity: Complete Edition will take you about 80 hours to finish and that includes exploring every inch of the game, facing all types of enemies and meeting all types of characters. I would have personally liked it to last a bit longer however the developers have done an overall great work. Everything in this game screams love from Obsidian. They poured their hearts into it and it is clear in the writing, the finishing of every level, map and details. Despite some minor bugs, this game runs smoothly. It is good to see developers take advantage of Kickstarter and deliver a finished game. To add to the glory, they released it with several languages.

Pillars of Eternity: Complete Edition was reviewed using a PlayStation 4 downloadable code provided by Paradox Plaza. The game is also available on Xbox One and PC via digital and retail stores. We don’t discuss review scores with publishers or developers prior to the review being published

Whether you are a veteran RPG gamer or just someone trying it out for the first time, do not expect Pillars of Eternity: Complete Edition to be that perfect experience for the genre. However rest assured that you will have a lot of fun exploring the beautiful world that is in front of you along with a beautifully written story. It is a great adventure rich with ideas. 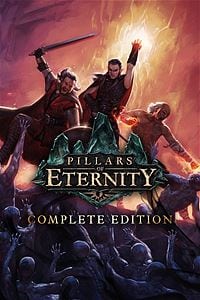