After Mr. Shifty, a decent and dynamic game (sadly poorly optimized for the Nintendo Switch), tinyBuild are back with a new game for the Nintendo hybrid console (as well as on PC) developed by Russian based Bread Team: Phantom Trigger. A hardcore hack and slash game with RPG and roguelike elements for the small price of $15. Is it worth your time and hard earned cash?

Described as a “hardcore neon slasher”, the first thing that strikes you in Phantom Trigger is its retro pixel graphic style in low isometric top view, very similar to a certain Hyper Light Drifter. The game tells the story of Stan, between two different worlds: the ghost kingdom and the real world, going through some scenes in real-life such as the hospital or consulting with a doctor. The story is divided into different flashbacks: from the beginning we do not understand much of it, like the connection between the two universes but it will become clearer, as Stan is being treated with life-threatening disease. The story is, in short, quite classic, with some choices to be made at times, that can actually alter the ending of the game (4 different ones to be exact).

Phantom Trigger is more than just a pixel brawler though, and the gameplay at the heart of the story is simple yet efficient. Our hero Stan has three basic attacks, a blue ice sword, a big red fire fist and a green whip that doesn’t do damage, but just acts as a way to bring the enemy closer to you. Once you get used to the simple attacks, you’ll be able to add in different combos that are unlocked by gaining experience and leveling up. For example you can perform a fire or ice dash by performing a combination of three specific attacks, which allows to do more damage in a area of effect, while you can also use some elements in the levels to launch projectile attacks. The first hours are not obvious in terms of getting use to it, and there’s a sort of lack of fluidity in the combat in comparison to other games of the genre, but the worst would be the repetitiveness that comes in quickly due to a lack of variety in enemies, objectives but also boring level design.

Phantom Trigger might look like a simplistic game, but it is a rather difficult one even in normal, so expect regular deaths and trials, which are not frustrating thankfully. It is though a game to be played in short sessions, since there’s numerous checkpoints, and help out players that lack the perseverance for the challenge. And while the enemies look kind of cute, you must always remain cautious since you’re technically brawling in “hand-to-hand” fighting and there’s no parry, so your life gauge can drop easily if you’re not careful. And to top it all, each dungeon has its own boss at the end, although I’m a bit sad that they are unfortunately not memorable.

Phantom Trigger is a correct game but will not win any sort of awards, and while many players will automatically link it to Hyper Light Drifter, the experience is different, with a neat soundtrack, although the VFX could bet better. Let’s also note that there is also a coop mode to enjoy the game as two players, which is adds up to the experience, and can reduce the difficulty of the game. Finally, Phatom Trigger does have some small technical problems, with some random frame drops during busy levels, random slowdowns when reaching checkpoints, and a very strange loading screen that sometimes will make you doubt if your console froze or not.

Phantom Trigger was reviewed using a Nintendo Switch digital copy of the game provided by tinyBuild. The game is also available on PC. We don’t discuss review scores with publishers or developers prior to the review being published.

Phantom Trigger is a nice surprise, and it's nice to have this style of play on a Nintendo Switch. Might not be perfect, but with that easy price tag, it's worth the try.

Review: The Vanishing of Ethan Carter 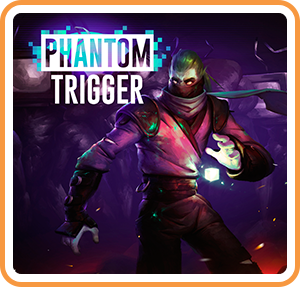