previous
Review: The Witch and the Hundred Knight 2
random
next
Review: Shantae and the Pirate's Curse
Video Games
0 comments

When you hear about Nippon Ichi Software, you probably picture the Disgaea franchise. With more than 25 years in the business, the studio has been doing games as early as the rest of the big Japanese companies, Today the studio offers an unusual game known as Penny-Punching Princess, with the similar visual style of the studio, as an isometric 3D brawler with some rather strange gameplay mechanics.

Penny-Punching Princess takes place in a world ruled by capitalism, where money is a source of everything, and play as a princess coming to take back her kingdom from the Dragoloans.To do that, our princess will need to fund her claim to the throne, by travelling across the realm of Dragoloans and kill as many monsters as possible or to bribe them with her calculator. As you can see, the story is an excuse to justify a game system as original as it can be. Nevertheless, the storyline – like most Nippon Ichi Software games – are full of humour, noticeable during the different cutscenes before each mission but also the general visuals and mood of the title. On the visual front, the game goes with a weird mashup of previous Disgaea style games, but in an isometric view in 3D, with a clear pixel art brush. It almost makes you feel like playing with little characters on a game board which is rather consistent in the humour of the game.

As a game though, Penny-Punching Princess is actually difficult to master. The game offers a large number of mechanics that, mixed together, will be difficult to use properly and efficiently during your first levels. The princess fights in a rather traditional way: quick punch, power punch or a blocking attack. The latter will also be very useful and will serve as a real buffer to pace your other attacks, including the use of most original combat tool: the calculator.

Allowing you to use the money recovered from your monster kills, the calculator will be able to perform several tasks. You can first bribe a monster, which will turn to your side, and then summon it for a devastating attack on your enemies. You can also bribe one of the many traps scattered on the field to use against your opponents. Throughout the game, you’ll learn that each monster will have a totally different effect when bribed, some immediate such as rushing for other enemies, while other monsters will perform various attacks like melee, charged ones, or area of attack powers. But the Penny-Punching Princess calculator can also be used for special abilities, depending on the amount you are spending from your bank. This will allow you, for example, to perform a meteor shower or heal quickly your character. It will, therefore, be important to calculate exactly how much to spend on each aspect of your mission.

As for the overall progress of the game, Penny-Punching Princess remains is divided into a series of missions, each grouped by chapters. As you advance in new chapters, you will discover new gameplay functionality, but the first levels will feel a bit difficult in terms of accessibility.

Too bad the progression early in the game is so slow because it can discourage people with difficulties to adapt to the game system. The thing is, Penny-Punching Princess requires a constant learning, especially in terms of linking different inputs in order to alternate with ease between basic attacks and the calculator skills, but it’s too bad the title lack in level design diversity. Nevertheless, it will be possible for the most motivated to redo each level of the game to perfect their score.

Penny-Punching Princess was reviewed using a Nintendo Switch digital download code of the game provided by NIS America. The game is also available on PlayStation Vita in digital stores. We don’t discuss review scores with publishers or developers prior to the review being published (click here for more information about our review policy).

With an arcade-style gameplay and RPG elements, Penny-Punching Princess is quite an original title. While not as easy as it seems, the game is still a fair challenge, but might be a niche game that fans of the genre will appreciate. 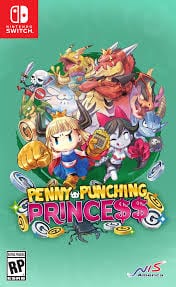