An already very popular game on PC and home consoles, Payday 2 came out in 2013 as a sequel to the awesome Payday: The Heist. Offering to be the bad guys for once, and strategically take part of robberies and heists as a team of 4, the game is one hell of a fun game for friends, and now that it’s out on Nintendo Switch, I got the chance to test this port. Is it worth it though? Maybe, if you can forgive one key issue with this edition.

Starbreeze Studios and Overkill Software’s game has since its original launch, gradually released additional content package on its other platforms, and most of these are in this Nintendo Switch version. I say most because it is missing some which is a shame considering the full price game, like just 50 heists in total in comparison to the 58 in other platforms, but at least the important DLCs are there plus some exclusive platform content (it includes content up until the Most Wanted update to be exact). While you’ll find the usual character customization packs like different heist mask, weapons and accessories, you still need to buy these digital items between robberies with your hard earned robbery cash which is one of its main lifespan advantages. The game is huge, and the missions are quite varied, especially since they are dynamic as the engine tosses random elements everytime so it plays out in different ways, which helps with replayability. That’s on top of the skill trees that are available to enhance each of the core robber’s capabilities, including the Nintendo Switch exclusive hacking-based criminal known as Joy. A new character in the franchise, she specialized in hacking and wears a digital LED mask – that reminds me of the game RUINER reviewed here on the site – which helps for those who like being stealthy, which was kind of lacking from the original roster’s characters.

While Payday 2 was never praised by its graphical or technical engine, you’ll soon realize a big shock once you decide to play the game with the Nintendo Switch dock. The textures are definitely not the best, but it’s the aliasing that will hurt your eyes, even if it runs at 1080p. Playing it in handheld mode does see a drop to 720p, which in a way reduces the noticeable tears, and makes the whole experience closer to the PlayStation 4 version, though a bit darker in colors. In any case, the experience is a stable framerate of 30fps, which makes the experience a bit painful because of its dynamic camera, as it moves slightly when your character advances. But my biggest concern was its handling, and I highly recommend investing in or pulling out the Pro Controller to play the game properly.

If it is possible to play Payday 2 solo with an AI-powered team of annoyingly dumb robbers, the title is especially meant to be played in coop multiplayer whether it is online or locally. In the latter mode, players can each be on their machine connected together via ad hoc technology which helps a lot, but it is especially the online mode that is interesting known as CRIME.NET. A matchmaking system that is rather fast, you’ll be able to use the handheld touch screen to move on the interface and pick your settings, lobby, loadout, and start the heist with a random group of robbers. But it’s in the multiplayer mode that comes the disappointment as well.

It’s already a known fact that the Nintendo Switch has no internal VOIP or voice-chat system, except the company’s ridiculous attempt of solving this with a mobile device app which currently only support Splatoon 2. With Payday 2 being all about communication with your teammates, it is not practical at all to develop strategies and properly run missions. While I can’t blame Starbreeze Studios for this handicap in online communication, the developer did mention recently that they have are waiting on approval to be added to Nintendo’s VOIP app, but that’s not perfect either from my own experience. It’s still a notable key feature that is needed on the console, so do like most other Nintendo Switch players and use third party apps like Discord or Skype to communicate if you really need to. And this is the main flaw of Payday 2 Switch, because at the end of the day, you can easily forgive its outdated graphics and its gameplay or handling that is a bit finicky with the Joy-Con. Otherwise Overkill Software and Starbreeze Studios’ game is damn fun to play with friends and offers a huge amount of content to keep you robbing for a long while.

Payday 2 was reviewed using a Nintendo Switch digital download code of the game provided by Starbreeze Studios. The game is also available on Xbox One, Xbox 360, PlayStation 4, PlayStation and PC in digital and retail releases. We don’t discuss review scores with publishers or developers prior to the review being published

• Crude texture and outdated graphic engine.
• Handling with Joy-Con can be painful
• The lack of VOIP is painful for such a tactical and strategic coop game

Painfully hurt by the lack of voice-chat capability on the console, Payday 2 is nevertheless a decent port of the game on the Nintendo Switch, with close to complete amount of DLCs from previous platform, and one hell of a fun experience playing with friends locally. 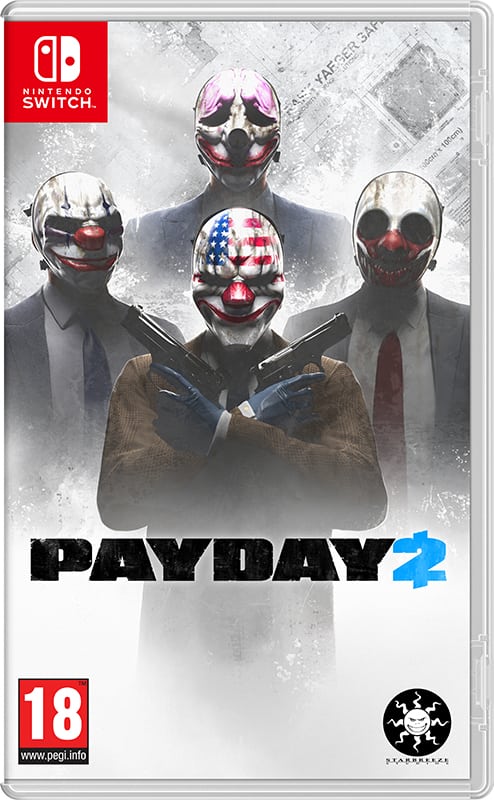