Already available for now four years on Steam, then later on ported to console in 2015, the Rogue-like shooter Paranautical Activity is finally out on the newest kid on the block: the Nintendo Switch. While the port to other consoles in the past has helped support this transition, we should expect a decent game… Or maybe not?

With Paranautical Activity, don’t expect to be grabbed by the hand, because from the moment you boot up the title, you just tossed in the action, after having more or less selected your starting character. On the bottom of the screen, you will mainly choose from four combos of equipment, ranging from a crossbow to machine gun or a grenade launcher. The idea is to adapt to your approach in numerous dungeons that will open before you, but after a few games, our choice will be done quickly as you realize that all weapons are not really balanced to face some enemies. This is particularly the case with secondary weapons, whose effect can sometimes be interesting but with limited ammo makes them very disabling, especially when our main weapon is not worth it either.

Where Paranautical Activity takes its rogue-like direction, it’s in the procedural construction of its dungeon. Without being a surprise to regulars of the genre, you’ll have to advance in a room and exterminate all the monsters to move onto the next, hoping they will let go of a certain item. As usual, it will be necessary to test your reflexes to avoid all traps and projectiles in rooms, in addition to facing enemies that get more and more dangerous as you survive this.

The first worry that will hit you is pretty much the hardcore difficulty of Paranautical Activity. The margin of progress is great and there is really a way to improve over the games, but the concern is that the difficulty is so intense from the start that you’ll need to be really patient, before really mastering the basics. During the first hour of games, your death will chain up, and you’ll pretty much have the urge to rage quit this game.

The thing is that the difficulty itself isn’t the big problem, even if it might discourage a lot of casual players. Paranautical Activity is clearly not a game that will be aimed at users who would like to start in the world of rogue-like, but not even for the genre’s fans, due to the title’s flaws that will spoil your pleasure in the long run. The replayability of a rogue-like will come mostly from the discovery of its content, and as usual, it will be possible to collect money from enemy kills and then invest in items that should make our life easier. Unfortunately, it will take a few hours to discover almost all objects available in the game, and their synergy and usefulness are not always very obvious, which doesn’t encourage you to experiment.

The other disappointing point will also come from the game’s artistic direction. It is clearly a matter of personal taste, but the design of most of the monsters that we will cross in the game is just bland, besides that they look similar to other titles. Do not expect to be surprised, because the bestiary is filled with giant moths, skeletons or ninjas. The only interest may come from imposed or optional bosses, although not much of innovation on that front.

Without being really full of defects, the limits of Paranautical Activity are quite noticeable. Whether visually or on its soundtrack that repeats a handful of electronic melodies, it is especially its content that can quickly be discovered in its entirety that will not invite you to stick around.

Paranautical Activity was reviewed using a Nintendo Switch digital download code of the game provided by Digerati. The game was previously released on PlayStation 4, Xbox One and PC via digital store releases. We don’t discuss review scores with publishers or developers prior to the review being published (click here for more information about our review policy).

Now available on the Nintendo Switch after its original launch in 2012, Paranautical Activity really does not stand out from the competition due to its lack of originality

Review: Bleed 2
Be the first to comment!
Leave a reply » 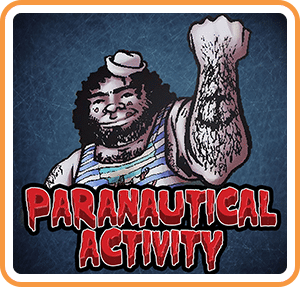