Back in 2013, Norway’s very own D-Pad studio impressed the indie community when they launch a demo of little game full of surprises. That game, Owlboy, eventually matured and cooked in the Norwegian ovens, to finally release on PC back in November 2016, and is finally out on the Nintendo Switch which gave me the chance to try it… And I rarely say that, but I absolutely loved it!

Players in Owlboy embody a young owl “boy” named Otus, who we discover is rather slacking in natural talent, shy but also mute, yet is our future hero in the game. To make matters worse, his mentor Asio is particularly demanding with him, constantly crushing his dreams, in hope that he would hopefully push himself to excel and accomplish great things. The story is pretty much a fantasy one, where Otus and his teacher Asio are humanoid owl creatures that are simply called Owls, and live in a sky world full of floating islands and ancient civilization relics, constantly under the mercy of flying pirates.

Like most adventure games, Owlboy’s story starts with a critical plot twist, which will serve pretty much as the introduction to the world and key characters, as well as gameplay tutorial. Our charming little floating village of Vellie, where Otus lives, gets harassed by a mischievous entity, and our hero will start chasing him into an abandoned temple with the help of his friend Geddy, and eventually finds a strange artifact and witness a tremor. The latter is cause by a surprise attack of a band of sky pirates determined to seize the secrets of the Owl people, seizing eventually another ancient Owl relic, which we’ll discover eventually is capable of granting ancestral power to its bearer if he manages to collect the other remaining ones hidden in this world.

Otus is then tasked by his teacher Asio to embark on a breathtaking adventure to thwart the plans of pirates with Geddy. This friendly duo is also an opportunity to get explain to you the “combat” mechanics of Owlboy. While our young owl can fly pretty much everywhere, he can’t hurt enemies, as his mere spin attack merely stuns them, but he’s rather gifted at carrying heavy objects and that’s where Geddy comes into the strategy. The later is unable to explore the verticality of the world as quickly as our hero being a “simple” human, but is equipped with a rifle to attack monsters at a safe distance. So it’s up to Owlboy to carry him around and make us of his firepower, adding this shoot’em up part to the game mechanics, on top of other abilities that will unlock throughout the adventure.

Now don’t expect that the game boils down to simple vertical shooting games, as it remains above all an adventure game, full of exploration elements inspired by names such as The Legend of Zelda, Kid Icarus as well as other Metroidvanias. You’ll travel back and forth across numerous region of this world in the sky, filled with floating villages or deep dungeons filled with riddles to solve, treasure to find and bosses to beat. All in all, it’s a well-constructed narrative that takes us through the world of this charming yet silent Otus, with a good rhythm, that can be completed in about 8 hours.

While Owlboy is not really a challenging game, the title has a good balance between the exploration phases and more tense moments, where the simple error could hurt you badly. The boss battles for example is where your skills will be put to the test, as your opponents – often much bigger than our hero – fight with specific patterns and will require quick reflex to evade and counter attack. I did have some small issues during these fights due to the fact that Geddy would get tossed too far from the action by a boss attack, and sometimes the detailed pixel art would not help with finding him so easily.

On the front of this pixel art, the game is a bloody marvelous masterpiece of meticulous digital painting and sprite animations, led by the D-Pad Studio’s Art Director Simon Stafsnes Andersen. The graphic style of Owlboy is certainly the core element that made me love the game, with so much attention to details in character animations, projectiles, effects and landscapes. Each place visited is an opportunity to stop for a moment and gorge your eyes on the meticulous work done on the background for example, or even these small little pieces here and there that gives the whole game so much life. It’s just a beautiful love letter to the golden era of pixel art.

The whole is accompanied by one marvelous soundtrack composed by Jonathan Geer. A Texan musician and graduate from Berklee College of Music, Geer has worked on numerous styles and you’ve probably heard his work previously in games like Azkend, Sparkle and other titles. Like its main hero, the numerous tun es in the game are light as a feather, but can become enigmatic and mysterious when discovering the lost temple of the ancient Owls, or captivating and energetic during boss fights.

Owlboy was reviewed using a Nintendo Switch digital download code of the game provided by D-Pad Studio. The game is also available on PC in digital releases and planned for release in the future on Xbox One and PlayStation 4. We don’t discuss review scores with publishers or developers prior to the review being published

D-Pad Studio's Owlboy is everything you love about the indie game industry: a pixel-art visual masterpiece that is supported by a solid story, gameplay and amazing soundtrack. It's available on Nintendo Switch and PC, and you should definitely get it, with no regrets. 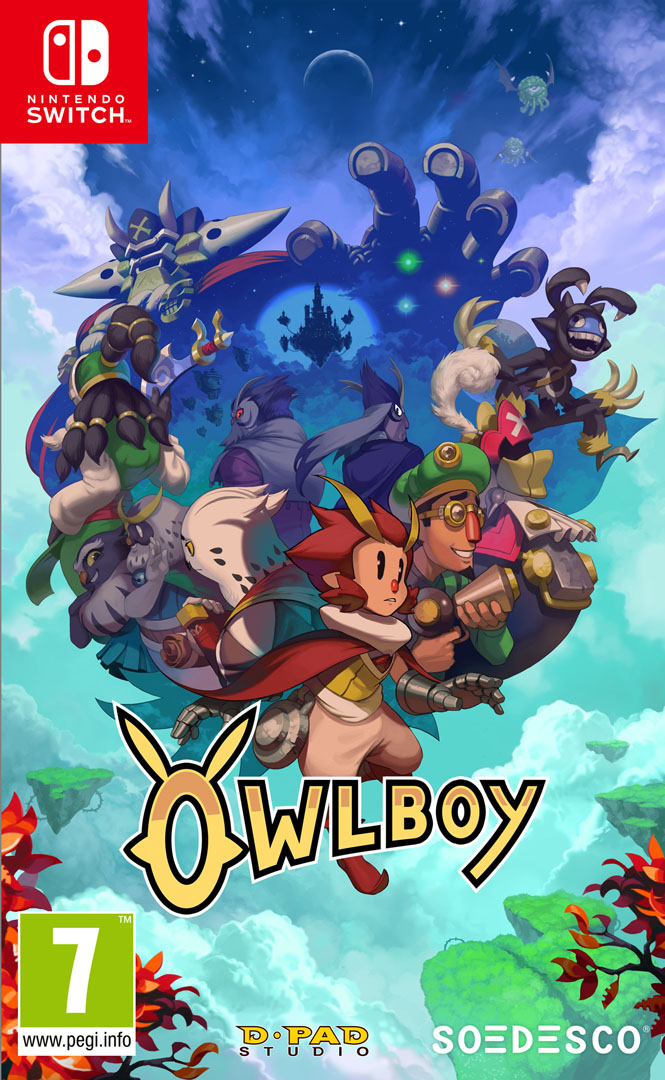