Developed by Broken Rules, Old Man’s Journey is an adventure-puzzle game that makes us live the journey of – you guessed it – an old man, after receiving a letter from an unknown person. Leaving his lonely house by the cliff, our protagonist grab his trekking backpack and walking stick, and sets on an adventure where he will have to defy land and sea to reach the end of his journey. Do not expect to see any sort of action and violence, as Old Man’s Journey is above all a beautiful interactive story in which you will go through levels full of simple but well thought out puzzles. Along our journey, we will discover what motivated this senior citizen to undertake such an expedition through key memories of his past.

Old Man’s Journey is a simple game that seems directly aimed at tablets and other mobile phones, which makes sense. The game originally released on iOS and Android devices (as well as PC), has an extremely simple and intuitive gameplay, with a point and click system to move our characters in the levels, and by dragging the scenery and background elements like hills and roads to build a path. The goal is simple: you must do everything for our character to reach a then end of each level, to unlock a memory of his past and advance to the next stage (15 in total), which will take you less than 2 hours to complete. At $9.99 on the Nintendo Switch, it seems quite a steep price to pay for this game, but in any case you can always grab the cheaper – half priced – mobile device or PC versions if you’re tight on your gaming budget.

Nevertheless, what will strike you first when playing the game is the beauty of the illustrations. A graphic style that is just fabulous, reminding me of some of Pixar’s shorts like George & A.J, I found so much pleasure contemplating Old Man’s Journey’s neat watercolor style animations. The game is even full of small added details that are for you to play with your fingers, like pulling power lines, disturbing a cat or shoo away birds in some levels. It’s simple, but so cute to realize that you spend most of your time trying to see what can be possible in each levels (or canvas). Moving our character is easy, even if I sometimes have trouble understanding when I can move on to another element of the set. Because once you are on an element of the level, you cannot move it, and it will therefore be necessary to plan ahead before getting stuck.

The difficulty of the game is rather easy, and you’ll never get stuck more than 10 minutes on a level, regardless of that one level where you have to deal with sheep. Other scenes will attempt to change the gameplay a bit, by forcing us to move the scenery to make way for a train or van to drive through the level. If the progression is logical, some levels will require more thought and more imagination, especially towards the end of the game.

If Old Man’s Journey is beautiful to look at, it also has a great soundtrack by Andrew “scntfc” Rohrmann, which you already know of if you played Oxenfree. It is excellent, and fit the game’s mood, of what seems an old man’s final adventure. The game is also very well written, even if it lacks any conversation or text to explain it, which depicts a tragic tale that will perhaps bring back memories of some of you players, ranging from pride, parenthood, love, abandonment and even despair. You see, our old man has lost a lot of things in the course of his life, and he will do everything to give redeem himself. But what has motivated this old sea bass to leave his peaceful life by the shores? Well, we discover it throughout the game, with a reminiscence almost of Pixar studios’  Up, but I don’t want to spoil the experience for you guys.

For those of you that played the game already on PC or mobile devices, you probably won’t need to get this version on Nintendo Switch. Mainly aimed at those that never played Old Man’s Journey before, the Nintendo Switch version does work with touch controls like on mobile device, running at 1080p in docked and 720p in handheld mode. The main addition will mainly be the brand new 2-player mode in the game, but the control can be a bit finicky with the joy-cons, as this was primarily made for touch-screen.

Old Man’s Journey was reviewed using a Nintendo Switch digital download code of the game provided by Broken Rules. The game is also available on PC, iOS and Android devices in digital releases. We don’t discuss review scores with publishers or developers prior to the review being published

A beautiful journey to reflect on life and the consequences of your adult choices, Old Man's Journey is a fabulously well drawn and animated interactive novel from Broken Rules studios. It might be too easy, and lacks on the gameplay front to justify the buy for some, but it's still a sweet, yet short-lived experience. 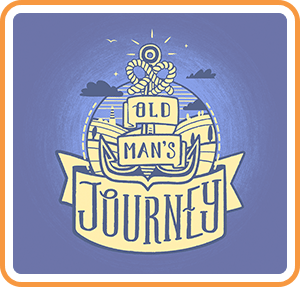