In the midst of big title releases, sometimes little tiny interactive experiments are a good way for me to change the routine. In this case, I’m talking about NORTH, an exploration game developed by German studio Outlands and published by Sometimes You. Definitely what is considered an experimental game, NORTH is a title with deep emotions and a subtle political commentary of the refugee crisis.

By base, NORTH doesn’t take long to finish, as I counted roughly 30-60 minutes, but I guess that’s not the point of this title, neither it is to entertain us or plain and simple be a game. The thing is Outlands’ title do have good intentions in an interactive experience that may be thought-provoking, at best moving but at least informative. Their portrayal of the crushing arrival of a refugee in a foreign world seeking asylum is overwhelming for the players, but not for wrong reasons.

On paper, the developers hit the right note by creating a dystopian metropolis that represent the NORTH, with walls as high as the eye can see, whose only lights seem like unattainable signs of life. This city that clearly is a representation of European metropolis where refugee are ending in, gives an excellent impression of how overwhelming and frightening this alien environment is. Even if the playable part of the city is not that big, with just three main streets, practically without any moving objects and separated by numerous locked doors, it makes the whole environment threatening.

But the main issue with NORTH is the lacks of the “game” or “play” factor. You play the role of a migrant refugee that escaped the SOUTH, and had to travel through a desert to get to the NORTH, now searching for work and become a member of this new home. But the interactive immersion in the role does not work, because of the structure or way the game tells the story via a bunch of letters to you sister. She will be the only person which our main character has any sort of discussion or interaction with, and those replies to your letters will be hints to the many riddles and puzzles in the game.

That’s the thing, you’ll never feel like the doer, but like the unnerved reader of a book, who seeks the pages of all the chapters scattered by the wind before he is allowed to read them all as one. And that is ultimately the biggest weakness of this interactive project, because while you see obvious hints that this whole plot is actually a commentary of the refugee and migrant crisis that started in 2015, the game neither makes a statement in any way nor become the emotional rollercoaster you’d expect. NORTH tells far too little to appeal to those who are interested or already informed, or even to say something to those who aren’t aware of the refugee crisis.

If you really want to discover this game while truly supporting the cause, then I’d suggest to get the game on PC via itch.io by clicking here, or pay $3 for the soundtrack which will equally be split into donations to Refugees On Rails and Refugee Open Ware associations.

NORTH was reviewed using a PlayStation 4 digital download code of the game provided by Sometimes You. The game The game is also available on PC in digital releases. We don’t discuss review scores with publishers or developers prior to the review being published (click here for more information about our review policy).

• Buggy and weird gameplay
• Short lifespan
• Not really a game

More than an interactive experiment than anything, NORTH is still a title created for a good cause, even if it's not really entertaining. 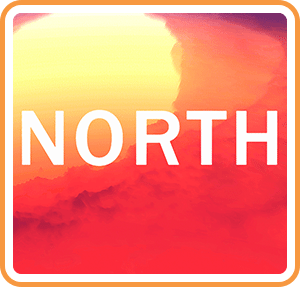