If you’re following independent developers, then you probably heard of Finnish studio Frozenbyte. Known for its really great games like Shadowgrounds, the Trine series and more, it was now the time for some fresh new games with the arrival of the Nintendo Switch. After the release of their first Nintendo Switch game – Has-Been Heroes – Frozenbyte are back with twin-stick blast ’em up adventure called Nine Parchments.

The basic concept of Nine Parchments is quite simple. A group of apprentice magicians decides to search for the nine missing parchments that flew away from their academy, each representing a powerful collection of spells. The game lets you take part in this adventure in either singleplayer or in local and online multiplayer for up to four players, with four difficulty levels: easy, normal, hard and hardcore (which you can juggle between in the middle of the game). The latter is no joke, as playing the full game in normal mode alone is a demanding feat, but not too hard to push away amateur players.

While Nine Parchments features up to 7 different characters, only two are available to start with, which are Cornelius Crownsteed and Gislan d’Alcyon, with their respective three starting spells. Our magician in training move at the same pace, with simple jump and a blink teleportation that is limited to a small gauge (which gets refilled slowly with time). As mentioned above, the game is a twin-stick game, in the sense that the right stick is for the character movement, and left for aiming spells at enemies, which are then fired with the ZR trigger. Latter on as you advance in the game and uncover new parchments, you’ll get access to new spells, which you’ll be able to switch to instantly in combat with the L & R triggers, on top of the rather crude melee attack you can do with the ZL trigger.

The spells fall into five different categories, like the ice ray to freeze enemies, the fireballs that explode on impact, the electricity bolt, the death cloud and finally the life spells that can help you regain health points. All these spells have a sort of magic point cost, which refills over time like the blink ability, and are weak are strong against different types of enemies. Your health will tend to fall very quickly and if the normal mode offers you a “comeback”, or one life chance between checkpoints after getting killed, the hardcore mode will be one hell of a challenge as a complete team wipe results in full game over.

So is the gameplay good in Nine Parchments? I would say it works well enough even if the aim is difficult according to each spells, especially since there is no possibility to move the camera. Our character are marked by a circle of color, which helps to distinguish them from the very colorful environment and enemies, on top of a small arrow pointing at the aim of your spell blast or ray. The game is also full of little bonus items to find such as chests of full of experience, cosmetic loot like hats and staves, on top of five feathers per level that unlocks even more stuff. However, since you can not move the camera, and the scenery is sometimes too chaotic for my eyes, you can miss a lot of little things, especially since the chests are not very visible.

Like Has Been Heroes, there are many things to unlock but the adventure itself is very linear, even with couple of areas that open depending if you found a specific staff or not, but nothing surprising in the overall progression. Some levels will be quite interesting at times, like the arena with enemies coming from all sides, but other can be rather dull and boring in terms of design. Another small point, frustrating this time, is that the map is quite small and it will happen (too often) to fall into a hole and thus suffer an instant death. If you decide to go into multiplayer, the game becomes more difficult and much less readable at times when there are many players, plus friendly fire is always on. That means that while more players teaming up for battle should make the task easier, the friendly fire will surely annoy you and your friends.

Graphically, the game is very pretty, widely colorful on TV and handheld mode but I can not help but be disappointed with the overall rendering. Environments, backgrounds and textures are neat but the overall rendering could’ve used some extra complexity to break the flow of certain levels. On the soundtrack side, this is where Nine Parchments shines, with melodies reminiscent of Trine, immersing players in this magical world.

Nine Parchments was reviewed using a Nintendo Switch downloadable code of the game provided by Frozenbytes. The game is also available on PC, and coming soon to Xbox One and PlayStation 4 via digital release. We don’t discuss review scores with publishers or developers prior to the review being published.

With Nine Parchments, Frozenbyte managed to create something new and fresh, even if doesn't achieve excellence. It remains a decent title to pick up, with a fair difficulty, lots to unlock, a colorful universe and a beautiful soundtrack. 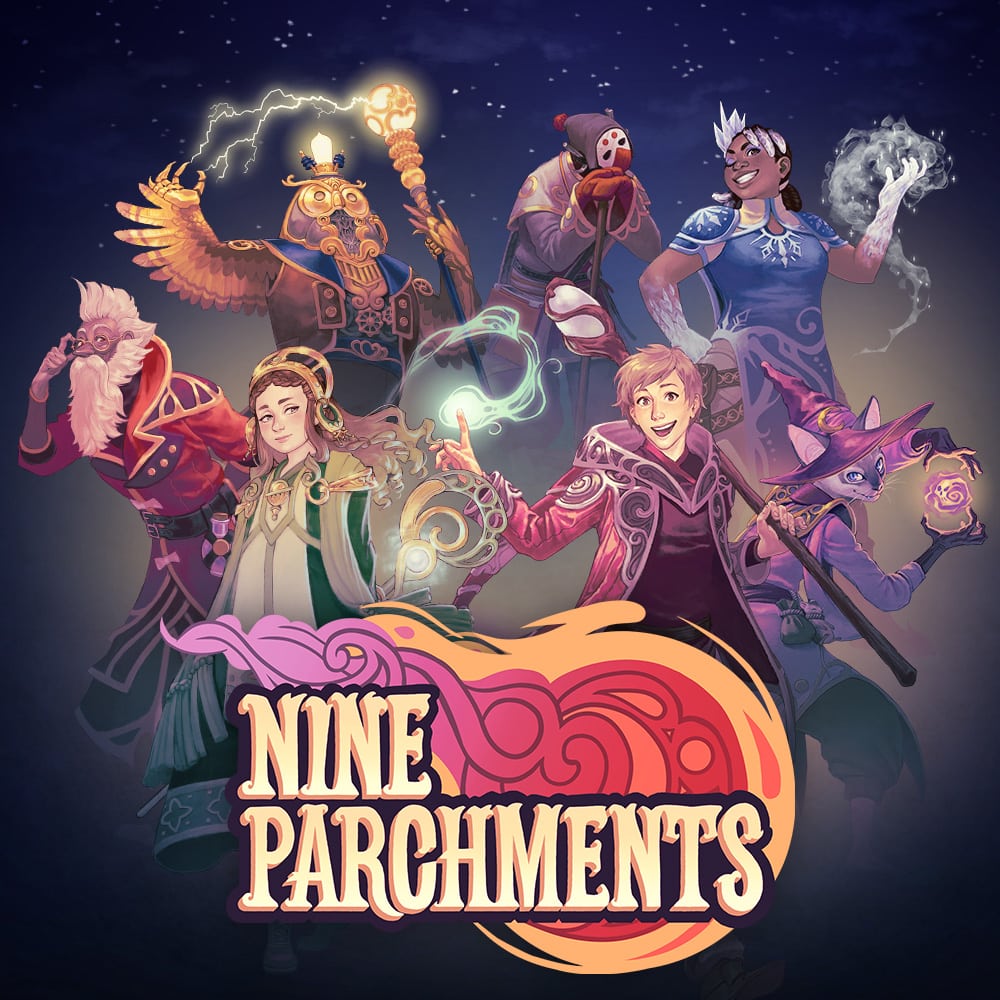