Review: Nights of Azure 2 : Bride of the New Moon

Back in 2015, Nights of Azure ended up as one of the biggest launches in recent years for Gust with nearly 90,000 copies sold in the first few days, which in turns become an important base for Koei Tecmo’s licensing portfolio. Now with Nights of Azure 2 : Bride of the New Moon, we hope to see something a bit updated from the original, out now on PlayStation 4 and Nintendo Switch.

When it comes to its link to the original game, Nights of Azure 2 : Bride of the New Moon is rather a sort of chaotic sequel. It begins exactly the same way with Aluche receiving the title of Templar with a mission to escort Priestess Liliana to a specific place for her sacrifice. Aluche is obviously not happy about sacrificing her childhood friend, even if it is to save the world from the menacing Moon Queen. From then on, Aluche will go against the orders given by her higher command and will seek to destroy the Moon Queen by her own means.

For player that played the original Nights of Azure, you may be lost by the scenario of this sequel (even for those that read about it like myself), because sadly it is rather disconnected to the lore in a way. The story of this second game does a very poor job of explaining the links between the two episodes, such as the origin of Moon Queen, or how the previous game’s Holy Knight Arnice has become a leader of demons. Anyway, you’ll end up reading more about it on internet Wiki than in the game, and that’s kind of weird way to push players to engage with the story. It’s a shame, because I do feel like the lore could be a great base for the game’s story, but it’s just badly told.

To cover in a way the rather short core storyline, Nights of Azure 2 : Bride of the New Moon uses a bunch of secondary tales based on the other characters in the game. There are around 6 other young ladies which you can build a relationship with, since the franchise’s main genre in Japan is known as Yuri (a pop-culture word to explain romantic or sexual themes in Anime media). And so throughout the storyline, you’ll be able to periodically live those partner relationships, with a series of rather simple quests like going from one to point to another, or just killing a horde of fiends together… A great concept, which sadly is not well executed, as it lacks an actual conversation, cutscenes or even proper significance of why I should be bothered to become close to those characters.

On the gameplay front, the game is pretty close to what most Action RPGs are from the Nippon peninsula. Combos are done by mixing the X and Y buttons, with different set variations, and can even be customizable in terms of layout. My only issue is that most of these actions miss a true visual impact, and the weird slowdown on the machine can demotivate the player. Even the boss fights were of little interest, which is a big disappointment.

The big addition though in Nights of Azure 2 is the duo attacks, in that you will choose an ally to support you on each mission or quest. Each of your partners have their own special abilities, which can either be an offensive or defensive one. To this we now get two gauges in the core gameplay, that allow more powerful attacks: the Double ATtack and the Lily Burst, two types of combined attacks that cause maximum damage in the opposite camp.

The environments in the game are composed of several sets independent of each other, cut into small areas which are fairly bland sadly. The missions work via a rather ordinary progression and level design in contrast to the world of the original Nights of Azure which were more connected. Each of your mission as soon as you exit the game’s main hub (a sort of hotel) is limited, ranging from 10 to 20 minutes in real life, but also in-game days. Each “excursion” will consume a day in your in-game calendar, clearly marked by the phases of the moon, and if you reach a new moon, your game is over (kind of reminds me of Majora’s Mask in a weird way). So, you’ll have to be organized, and manage to finish as much as possible per trip, and make sure not to fall in combat as you’ll end up losing a day because of it.

While I expect the game to look better on PlayStation 4, my review copy was on Nintendo Switch, and it seems the latter version is closer to the Japan-only PS Vita release. Although the rendering of the combat is much better, especially with the many visual effects during various attacks, the overall quality is rather crude and there’s insane framerate drops even when there’s no crowded action, reminding me of the early days of the PlayStation 3. You really realize this when you watch in-game cutscenes, where character animation are stiff, textures are really pixellated and there’s almost no facial expressions.

Nights of Azure 2 : Bride of the New Moon was reviewed using a Nintendo Switch downloadable copy of the game provided by Tecmo Koei. The game is also available on PlayStation 4 and PC via digital and retail release stores. We don’t discuss review scores with publishers or developers prior to the review being published

• Great soundtrack
• Quite a challenging game

Lacking a clear narrative and suffering from outdated gameplay mechanics, Nights of Azure 2 : Bride of the New Moon will probably only appeal to fans of the series. The sequel doesn't bring anything new to the table, and is mostly crude in terms of execution which is a pity from a studio known for their great work on the Atelier series. 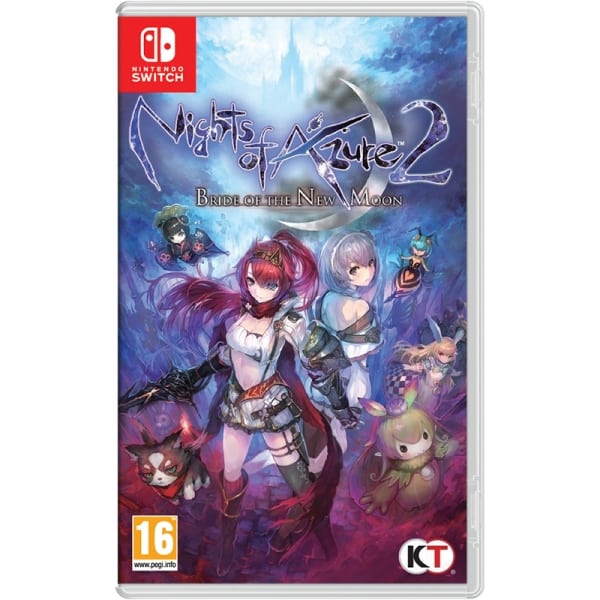