After more than 8 years since the original game, Ni No Kuni II: Revenant Kingdom is finally out from the same team over at Level-5 Studios. A JRPG with a visual style inherited from the acclaimed Studio Ghibli, the sequel aims to do the same as the original Ni No Kuni, telling a moving that any role-player will appreciate while enhancing the gameplay aspect of the franchise.

While the first game was on PlayStation 3, the new generation consoles bring a new potential for the Japanese studio to explore, with the promise of perfecting and modifying everything that did not work in the Ni no Kuni: Wrath of the White Witch. And so, one of the most notable changes that we find in Ni No Kuni II: Revenant Kingdom are the names leading this project. After actively participating in the development of the first game, Studio Ghibli decided to take a step back, letting Akihiro Hino – Level-5’s CEO and President – to lead the production of the title, with the help of two of its most trusted and famed people: Joe Hisaishi and Yoshiyuki Momose. The latter being a character designer used his learning from Porco Rosso and Spirited Away to create the gorgeous protagonists and antagonists for Ni No Kuni II, while Hisaishi returns to bring his famed compositions to the mix. The composer doesn’t need that much introduction, considering he won over 7 Japanese Academy Award for Best Music Awards for his work at Studio Ghibli,  as well as the Japanese Medals of Honor for his contribution to artistic enhancement. From that core team, Level-5 got pretty much all the talent needed to make a masterpiece, and hopefully reach its ambitious objectives.

While the game is in the same universe as the first game, we return happily to the kingdom of Ding Dong Dell, centuries after the events of Ni No Kuni II: Revenant Kingdom. With the royal city under tension because of differences between the cat and mouse tribes, our main protagonist – Evan Pettiwhisker Tildrum – is the next in line destined to rule, after his father’s death. Right before his ascension to the throne, young Evan gets survives a political coup from the mouse tribe, which he then discover where behind the assassination by poison of his father, forced to flee his rightful home.

From that moment, Evan must undertake a mission to travel throughout the kingdom of Ding Dong Dell, and restore his own kingdom thanks to the help of his companions. The first one introduced and playable character in the game will be Roland, a president in our modern time and word who seemed to have been teleported to the kingdom after a fatal accident (as a reminder, the protagonist of the first game, Oliver, also travelled from our word to the kingdom by mean of dimension travelling in the first game). Our second and final playable character that will join this quest will be Tani, the daughter of a bunch of sky pirates chief.

As you play throughout the game, you’ll instantly fall in love with the artistic direction. As mentioned before, Momose brought not only his skills in character design but also to the core script of the storyline. His colourful creations, clear lines and pastel tones, are a true legacy of the Studio Ghibli films, having worked on big names like Porco Rosso or even Grave of the Fireflies. In the game, the team uses a fantastic medieval setting that you could compare to some of the biggest Ghibli work, such as the valleys seem taken straight out from Princess Mononoke.

When it comes to the gameplay, the core foundations of Ni No Kuni II: Revenant Kingdom are mainly led by Level-5. This team responsible for titles like the Dark Cloud and Professor Layton series have a lot of experience creating JRPG, and you are reminded of that in every part of the game. The world is travelled like the original with SD character designed – Super Deformed – in a huge world map, while smaller key exploration areas like dungeons have a closer third-person camera angle which is similar to the combat phases. On that front, we say goodbye to the turn-based system and face a more dynamic real-time Action-RPG mechanic which gives us spectacular fights. The evolution of the characters and the management of weapons and equipment, as befits a role play, are also very carefully updated, but what I really liked is Ni No Kuni II’s classical approach in key JRPG elements including AI-strategy, resource management, mini-games and a hell lot of collectables and loot.

The general plot of Ni No Kuni II: Revenant Kingdom knows how to combine two very different known recipes of the JRPG tradition. It is the eternal struggle between good and evil, and the aspirations of Evan to create a new kingdom and draw alliances with neighbouring countries for what you seem fit. By tackling these two-story pillars, the game tells the story of Evan and his fight to overcome the loss of his parents and loneliness. Roland, on the other hand, who is a President in another dimension, finds himself in a strange world and must act as a real adviser and friend to someone he barely knows. Then we have the sky pirates Shanty and Zoran which add a more comical role to the storyline, while Cecilus acts as the romantic and melancholic arc.  All these narratives told in the forms of chapters are intertwined with a good handful of secondary story arcs – which obviously gives us varied side-missions – and let us meet one my favourite part of the game which are magical beings known as Higgledies. The latter reminds me of My Neighbor Tototoro’s Susuwatari, or better yet the Kodama from Princess Mononoke, which are in Ni No Kuni II magical creature represent each of the kingdom’s element like fire, wind, water and so on.

If you played the original game, you would’ve remembered that the combat system in Ni No Kuni was very particular. Level-5 used the classic JRPG turn-based system as well as letting us recruit and evolve AI-controlled creatures to give us a hand, a bit like Pokemon or even another one of their game known as Yokai Watch (a very underrated game you should probably try). With Ni No Kuni II: Revenant Kingdom we now switch to a real-time Action RPG which makes things more exciting. You control one of three main characters, which have both a normal or heavy melee attack, a dodge, a cover stance and long-range hits by means of magical spells or projectiles like firearms or arrows. Each hit on an enemy fills an energy bar, which allows us to activate special combos, and that was not enough, we can also request the help of the Higgledies to beat the toughest enemies. The combat in that sense gains even more depth with the possibility of changing instantly between the three characters, and merge attacks or focus on a single enemy, on top of skill-based attacks like area-of-attack hits and the ability to change weapons on the fly between a choice of three set ahead of time.

But to regain his rightful rule, Evan must think bigger than just fighting his way through monsters and enemies. The king will set his sight on building his own kingdom known Evermore, where not only you must build buildings like barracks or farms, but you also must manage your citizens according to their abilities to be most effective. This simulation aspect of the game is reminiscent of the old Dark Cloud series from Level-5 (or even Suikoden), and depending on the citizen’s characteristics, the production time of each building will take either more or less time. Of course, all of this comes with a solid resource management system from elements and resources collected through the adventure and combats. This is all the more important in the later stage of the game, because some productions of your kingdom are necessary for your progress in the adventure, like the Magic Academy which will help you rebuild key bridges in the world for example.

That kingdom will constantly get attacked by bandits and other enemies, and thus another new gameplay mechanics in the franchise which are RTS style battles. These skirmishes are solved by means of a triangle set of weaknesses like a rock-paper-scissors system, but with three types of units which are swordsmen, pikemen and archers. What completes this system is the possibility of conquering defensive buildings, such as watchtowers and cannons or requesting reinforcements at certain times. Without being as complex as an RTS, the truth is that it has managed to get me addicted to this mode, and as you would assume, the more battles you win, the greater our experience is gained and will be able to face more powerful armies.

All of this though may be a bit overwhelming for less experienced players, especially those who never played other Level-5 JRPGs because of the sheer number of things to do in the game. But if you take it easy, every little step to make Nevermore a great kingdom is fun and rewarding, thanks to a little patience and let the story grow at your pace.

Ni no Kuni II: Revenant Kingdom was reviewed using a PlayStation 4 download code of the game provided by Bandai Namco. The game is also available on PC in digital and retail releases. We don’t discuss review scores with publishers or developers prior to the review being published (click here for more information about our review policy).

• Ghibli-style artistic direction
• Solid Action RPG gameplay mechanics
• So much to do even after 40 hours of game
• Amazing soundtrack by award-winning composer Joe Hisaishi
• A deep and moving script with numerous story arcs.
• Gameplay reviewed with intelligence
• The RTS and simulation management element of the game

Ni No Kuni II: Revenant Kingdom is easily one of the best games of this early 2018 and will probably mark the rest of the year for its great accomplishment. Both a visual and musical feast for all sort of players, Level-5’s sequel to the original JRPG mixes both a bold change of gameplay mechanics, additional depth, and a solid story without harming the legacy of the series. A delight for both fans and newcomers. 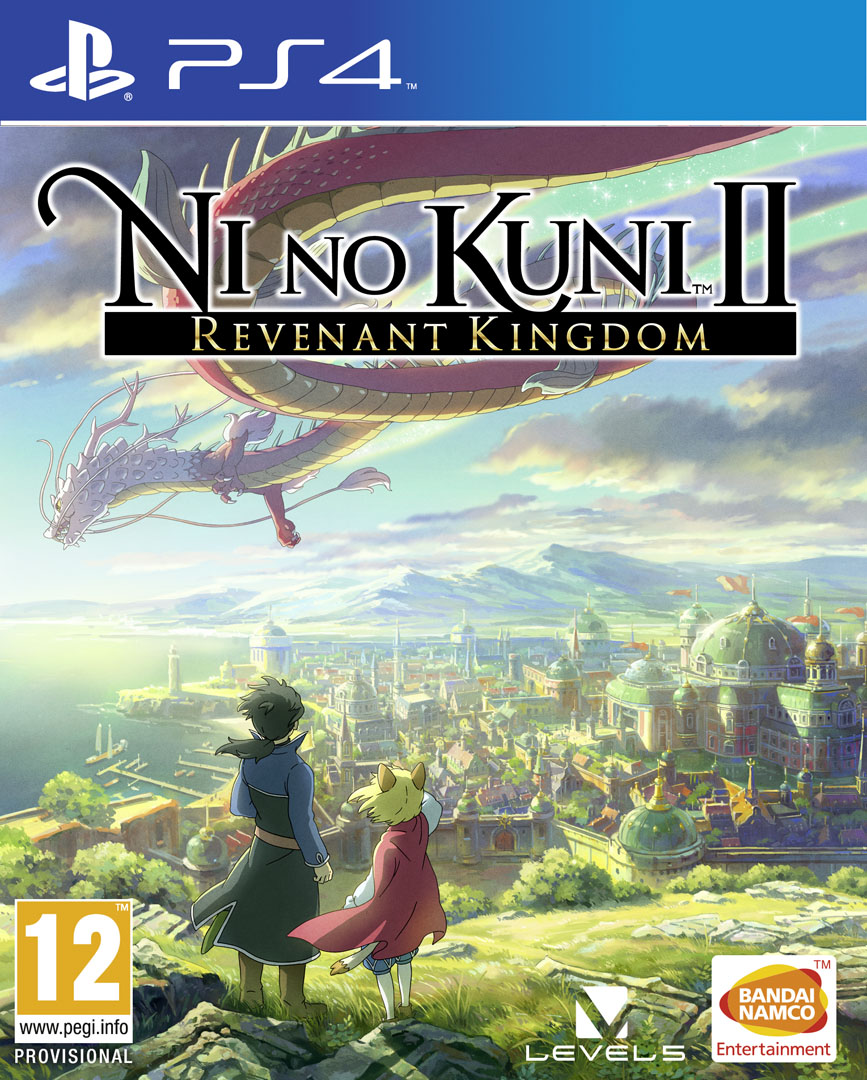