Because it’s a retro collection, Namco Museum is not any kind of remastered game, but just a nicely packaged mix of titles. You will find yourself in games that are back to the simple gaming basics, with early 1980s and 1990s graphics, 8-bit soundtracks but at least the way we remember them. This compilation has a very good lifespan, especially given the amount of games offered, and Namco Museum for Nintendo Switch had the great idea to add a backup point ability, to be able to get back to the game whenever you want, like an emulator save.

Obviously, Namco Museum for Nintendo Switch takes advantage of the features of Nintendo’s newest hybrid console,  offering two ways of playing the games. Indeed, you will be able to play on the go thanks to the main screen, with Joy-Cons attached to it (or unhooked) or even a Pro Controller. Unfortunately, in the handheld configuration, the visibility is an issue, since the actual title from the compilation is only using around 30-40% of the Nintendo Switch’s screen, with the rest being just a key art background related to the game you’re playing. You can though, rotate the screen to get a larger ratio which is a nice effort, but might be tricky to find a proper positioning since the Nintendo Switch’s support latch only works for landscape mode. In the end, you’ll probably op for playing Namco Museum on your television, which changes everything. The game screen is inevitably larger and the experience overall is much better.

There is though, the small issue of playing with a Joy-Con, as their own thumbsticks can sometimes lacks precision, especially when you play Pac-Man. Indeed, when you choose a direction, the Joystick can misinterpret and thus find yourself facing your worse Ghost enemies. I especially noticed that flaw in Pac-Man, but also noticeable in Dig Dug and The Tower of Druaga. On the other hand, if you play with the Pro Controller, there’s no more problems.

To further extend the lifespan of Namco Museum, the compilation has an online ranking, long awaited by players of previous versions. Now, when you complete a level up to the final score, it will be possible to send your data online to take part of the global ranking! Simple and effective, especially for players that want to show off their gaming skills. On top of that, Namco Museum also has the Challenge Mode, which allow you to play selected game with extra goals to accomplish on the side, adding more challenges on top of just finishing a game you probably played numerous times.

Namco Museum was reviewed using a Nintendo Switch digital copy of the game provided by Namco Bandai. We don’t discuss review scores with publishers or developers prior to the review being published.

If you're a fan of the old retro Namco Bandai games, or are too young to have even played these games, then Namco Museum is for you. With 11 games, and an affordable price, on top of the portability of the Nintendo Switch, this compilation is a great way to relax alone or play with friends. 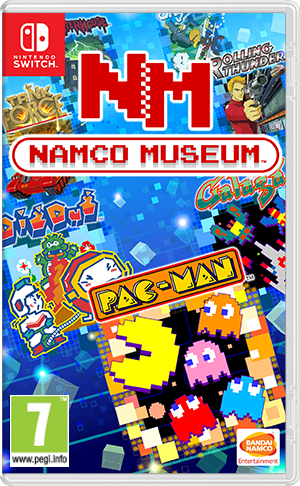