When I mention Team 17, you probably would think of games like The Escapists or the Worms franchise, but this British based developer has become quite a big studio and publishing house nowadays. After a series of games from their own studio, the amazing Yoku’s Island Express (which we reviewed a while ago) as well as announcing the sequel for Overcooked, they now give us Mugsters from Reinkout Games. A strange little game that will probably be missed under the radar of many, but is actually one hell of a blast.

So what’s Mugsters exactly? The moment I booted up the game, I was just tossed into this polygon-like environment, where my main character seemed to be so tiny on the Nintendo Switch handheld screen I needed a magnifying glass. After getting my bearing right, and probably losing a couple of eyesight degrees, I figured out the gist of it: you are basically stuck on an island where extraterrestrials have arrived, and will be tasked to play 25 different levels to save other human being and fend off the alien invasion. Most levels – called islands – are pretty simple: recover a certain number of crystals, free humans locked in cages and escape to safety by any mean necessary, whether it is a plane, boat or car.

While the main goal may seem superficial, or too simple for you “hardcore” gamers, It would be best to tone down on the cockiness because Mugsters is no easy game. The core gameplay is based on a particular physic engine that reminds me of a bit of Human Fall Flat (also reviewed on our site), where each island is, in fact, a sandbox level in which almost everything is destructible. You’ll be able to to blow walls with the help of exploding barrels, smash everything with the help of vehicles at your disposal or just throw anything you can pick from the ground and smash some fragile barriers. Be careful, however, because the difficulty of the levels rises pretty quickly after the first five levels and this gap can sometimes leave room for frustration.

As you spend more time in Mugsters, you’ll realize that each island can actually become a real challenge, with a crazy task such as reaching the exit without triggering traps, or be completely unseen by the UFO, and so on. But of course, like any game that bases its gameplay on a very particular physics engine can have a plethora of bugs. For example, I saw a random piece of the levels just simply drop or roll on the human I just saved, killing him in the process and forcing me to restart the level. Or for example, due to some explosion blast of a wall, the crystal I needed to collect ended up stuck in a part of the level I couldn’t reach at all. Nothing really problematic to be honest, especially for those of you that like these “experimental” games.

And so you have it… There are around 25 islands to solve with their own challenges, which each open up a time trial mode once solved, plus there’s a multiplayer coop part in the game. Instead of using the same exact levels, Mugsters coop ups the challenge in each island to make it work for two players, to try to think smartly together and experience a blast of laughs as you discover the craziness of the physics engine.

Mugsters was reviewed using a Nintendo Switch digital download code of the game provided by Team 17. The game was is also available on PlayStation 4, Xbox One and PC via digital store releases. We don’t discuss review scores with publishers or developers prior to the review being published (click here for more information about our review policy).

Mugsters doesn't look like much at first sight until you discover it's one hilarious physics-based puzzle game that will get you hooked, especially when playing with a friend. For the price, you shouldn't miss this game from Team 17 and Reinkout Games. 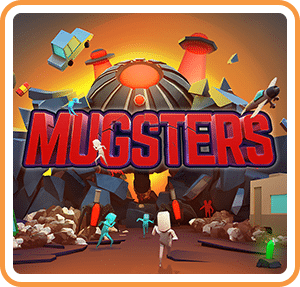