Editor’s Note: Years after the game’s original release on Xbox One (and other platforms) known as Monopoly Family Fun Pack, this review has been updated by Nazih Fares following the release of the game on the Nintendo Switch as well as the updates to all customers which reflects on the overall score, and final verdict.

Ah Monopoly! The iconic real estate board game finally lands on Nintendo Switch, which in it own way is similar at first sight to the 2015 release of Monopoly Family Fun Pack, given a new name: Monopoly for Nintendo Switch. Does this edition change anything to recipe? Or is it just a simple port on the Nintendo console?

Because there’s no point explaining what Monopoly is again, you can simply read the original review of Monopoly Family Fun Pack below this Nintendo Switch part, as we talk in depth about the mechanics and other key features common to both versions. This review part will be solely focused on the differences and what additional elements it brings by having a Nintendo Switch version.

When it comes to content, the game is very standard and similar to the previous Monopoly games, with five different game boards available. Among these, we have three “living” ones, which are the classic city, the amusement park and the haunted plateau. These boards are called “living” because of the way they react to your interactions in the game, and burst of “life” as you build properties on them. On top of that is the classic boards, which are basically the traditional one that everyone knows from real-life Monopoly, on top of a branded Raving Rabbids board. Shame though, I expected a more Nintendo themed board to be added for this version, especially considering there’s two of them in real life with Monopoly Gamer Edition and Monopoly: Super Mario Bros Collector’s Edition.

On the multiplayer aspect, the game fully utilize the console portability and ease of creating party games, by giving us a 2 to 6 players offline and online mode. Offline, you will be able to play together in group of up to 6 players, with multiple Joy-Con or even by sharing just one in a “pass and play” system. As for online play, you can join lobbies randomly via the quick play, things are similar as above, but it did take awhile to get the game started or even finish it (Monopoly isn’t a short game), but my main issue was the lag between pressing buttons and actually seeing the action on screen.

The game overall is pretty nice to look at whether playing in handheld or docked mode, but there’s some severe graphical differences depending on the play modes or which boards you are playing on. The game seems to be running at a steady framerate of around 30FPS, but there’s massive drop in frame rates when playing complex animations like on crowded living boards, or playing online, which are non-existent flaws when you’re playing alone on the plain normal board.

Even after the most recent patch, which fixed the extremely bad ressource management of the console, resulting in 6 to 10 minutes long loading times, the overall experience is still slow. The same lag found in the online mode is present in the single player experience, and some animation feel like they are stuttering. The second issue is that I realized that my console was getting its battery drained while in handheld mode after and hour or two of game, which is ridiculous considering I could play more demanding titles for twice that long.

In any case, buying Monopoly for the Nintendo Switch is in my opinion a must for families and adults that want to play the iconic board game on the go. If you’re fussy about performance (or the Switch version price), then you’ll be better off buying Monopoly Family Fun Pack which is currently available on Xbox One and PlayStation 4.

A new era of consoles calls for a new era of interactive board games; Hasbro and Ubisoft have teamed up to deliver us a videogame based on Monopoly, the famous real estate board game: Monopoly Family Fun Pack. This is actually a compilation bringing together two Monopoly games and more, including My Monopoly, Monopoly Plus, Monopoly Deal, and the Rabbids Monopoly themed board DLC. Play with family or friends with some online options, but does Monopoly Family Fun Pack pays enough homage to the original Parler Brothers’ board game?

Fans of the board game will no doubt find their happiness at the heart of this compilation. Deployed on next-gen consoles only, Monopoly Family Fun Pack are built with cloud support, containing three games, each one available for single download as well. First in the list, Monopoly Plus, is the adaptation of the classic board game, in 3D, except that you can adapt the rules to your own way of playing.

My Monopoly, the other set in this collection is the extension of the first which allows you to customize the boards at your leisure. The compilation also contains the Rabbids DLC that allows to transform the board into a Rabbids infused one with wild Rabbids added pawns added to your collection as well.

Finally, Monopoly Deal prolongs the experience with a card game for which the victory goes to the player who manages to bring together three properties of the same batch of color.

The first few minutes booted in my first game seems really friendly. We start by witnessing the board come to life instantly refined with fluid graphics, accompanied by background music which, even though not catchy, and is not annoying like the mobile versions of this game. In short, the game looks good to the eye even though we do not expect much of it in the graphical section.

The biggest problem sadly with the game is on the party side. Pinned as a party game for next generation, if Monopoly Family Fun Pack allows you to play with up to six players, offline or online, the limits are of the game are discovered early on. Playing against the AI will quickly annoy you, and is particulary easy to beat, even in hard mode, as the AI takes his revenge with every defeat by freezing the game (rather annoying bug if you ask me).

If you play cooperatively locally, the title works pretty well, implying you to have friends to play with you. Once you try online, that’s when the game starts to bite you, and you cannot coop against online players either, which is a shame. But above all, there are far too few players online in the lobbies, forcing a long wait to finally join one. Maybe this will change in the future, and I really hope so.

Worse part is, when you’ve finally found someone online to play with you, they tend to leave the game without warning a little too often. The gaming equivalent of the sore-loser friend who sweeps the board with a wave of the hand. If it was the host of the party, the latter stops dead. Since there is no online scoring system, there is obviously no penalty in abandoning the game. Suffice to say that this kind of surprises, unfortunately recurring many times, prevents a good game experience.

Monopoly Family Fun Pack was reviewed using an Xbox One and later on Nintendo Switch downloadable code provided by Ubisoft. The game is available in both retail and downloadable versions on PlayStation 4. We don’t discuss review scores with publishers or developers prior to the review being published.

• A board game that comes to life
• highly customizable
• Rabbids DLC
• Up to 6 players locally or online.

• Why no Nintendo themed boards?
• Serious performance issues even after the patch

Monopoly for Nintendo Switch will satisfy those who want to play the iconic board game with friends on the screen or with a digital portable experience. It lacks the serious singleplayer experience with a dumb AI and performance issues when playing online, but overall is still a fun and kind of overpriced title for the Nintendo console. 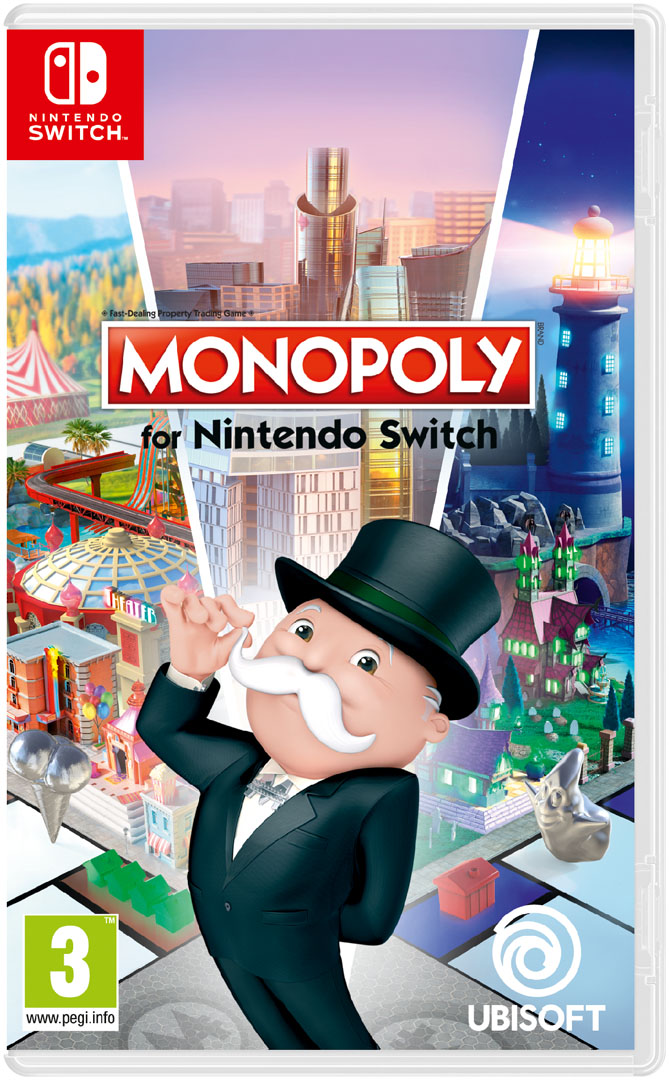